What makes productions by Boom Theatre Company so valuable is that they bring to audiences, specifically those in Harford County, theatre that is truly cutting edge. The Journey of Thing Three, an original play by Boom’s new Artistic Director, Joshua Fletcher, is a strong addition to the company’s four-year history of producing what their mission statement promises: “creative, smart, and challenging theatre.” 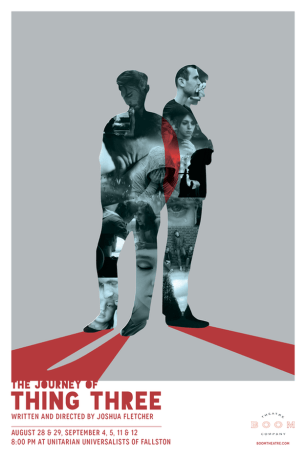 Fletcher’s play is an ambitious exploration of a life-long relationship between two brothers, Ezekiel, played by Ben Hill, and Ansel, played by Anthony Chanov. Fletcher’s chronicle of their lives is at times touching, at others amusing, and always unconventional, as they make their way through botched marriages, estranged family ties, and flourishing careers with the help of Thing Three, Ezekiel’s favorite bong.

For a playwright who is still finding his voice by experimenting with many different styles of language and structure, Fletcher’s work shows real promise. His monologues are some of the high points of the script. An army colleague named Alex tells a graphic story of seducing a bouncer’s girlfriend at the bouncer’s own club; Ezekiel himself offers us a thoughtful reflection on high school power structures, jealousy, and love that begins with him “thinking philosophically” about “bikini –clad gals.” Thematically, the material often draws laughs as a character like Mickey (Dustin Horsman) admits to being introduced to pot by his father, or tears, as the two women in Ezekiel’s past, Caroline (Lauren Scott) and Thea (Jennifer Hasselbusch), admit to loving him quite literally to his dying day.

The production is well-cast, with Hill and Hasselbusch delivering the strongest performances within a thoroughly talented company. Hill brings the perfect balance of charm and brooding rage as a wounded, cynical stand-up comic who is far better at bringing joy to the world at large than himself. Hasselbusch as his on-again/off-again spouse is consistently driven and committed in her character’s life-long struggles between hope and despair.

Chanov and Horsman fulfill their roles nicely as, in turn, the brother always trying to make Ezekiel see what he is missing (whether it’s a relationship with their father or a connection with the woman he let get away), and the snarky cousin, who delivers some of the more overtly meta lines of the play. Beca Wiseman plays a surprisingly open-minded Mom, while Marshall is called upon to play two equally thankless roles. Both Bradley, Caroline’s husband, and Alex prove to be charming on the surface but the worst kind of misogynist pigs underneath. He executes both characters with brutal honesty.

As this was opening night of a completely original play, there were also some elements in need of further development. Fletcher’s efforts to cover so much time lead to some underwritten dialogue and scenes. Characters get to talking about family problems so quickly that plausibility is strained; a thwarted rape scene in the Ezekiel’s army days is a compelling dramatic event, but one that lacks context when it is the only scene during those three years of his life. Some of the actors work so hard to sound comfortable with the dialogue that opportunities for subtextual levels are sacrificed. The cast as a whole miss the opportunity to support the timeline of the play by showing the effects of aging in their performances. In general, the dialogue would be stronger with more secrets and surprises, and with a faster pace of delivery and broader contrasting acting choices. But these observations only underline the important work that Fletcher, Managing Director Erin Curran, and the rest of the Boom Theatre clan are doing, in showcasing original and/or under-performed plays in Harford County (a place where other companies generally limit their seasons to big-name musicals), and giving them a chance to be seen and tested before a live audience, that they might hone their talents into mature, polished technique.

The Journey of Thing Three does many things that other plays don’t. It challenges conventional notions of drugs and relationships, of success and goals, and even of life and death itself. It normalizes behavior that might otherwise be considered abhorrent, while also questioning said behavior. It is these themes, delivered passionately by actors that seem to care deeply for Fletcher’s characters (characters that one might believe he wrote with these actors in mind), that makes this play worthwhile and fulfills the mission of Boom Theatre.

Journey of Thing Three plays through September 12, 2015 at The Boom Theatre Company performing at The Unitarian Universalists of Fallston – 1127 Old Fallston Road, in Fallston, MD. Purchase Tickets online or at the door.