The Burlesque is Coming Tour is a big burlesque deal! 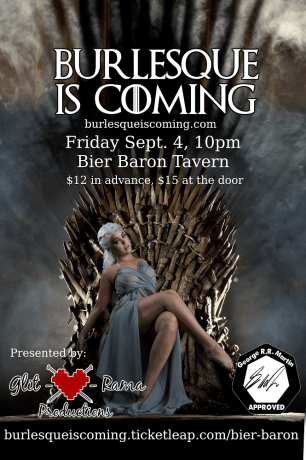 This Game of Thrones-inspired tour is making 22 stops across the country – more than some major indie bands do!  Oh, and, small detail, it’s been blessed by none other than Game of Thrones creator, George R.R. Martin himself.

We had a chance to chat with Bella la Blanc recently whose Glit-o-Rama Productions is co-producing the tour with Moxie la Bouche of  Blacklist Burlesque.

So how did Burlesque is Coming start?

One night after a show in Richmond that was being held by Moxie la Bouche, we were hanging on her porch and it was just an idea … And then I said it had to be more than a show it needed to be a tour because our show idea was so epic and now we’re starting our second year!

How did it come to George R.R. Martin’s attention?

Early in the year I was invited to headline a science fiction convention in Seattle called Norwescon. He was the guest of honor and Miss Violet Deville from Seattle and I presented him with an invitation to come to the burlesque show that was being thrown in honor of his literature. After the show he came back stage and he and I started talking and took some pictures. I tried not to fangirl but I did.  He gave me his card and told me to call him once I finished the leg of the tour which happened to end that following Sunday, in time for the season premiere of Game of Thrones!  I called him that next Tuesday and we were invited to perform for three shows in two days at his personal theater in Santa Fe New Mexico.

Who is the core cast of the show?

Whose idea was it to make a documentary? Will they be shooting at the Bier Baron this Friday?

Yes!! Ray and Moxie and their idea makes perfect sense since we’re all big nerds and this really is a labor of love that we should document our journey and all the ups and downs that go with a touring burlesque show – from having to have all of us crammed in a living room on air mattresses and sleeping bags to when we have a good night and we can actually book hotel rooms and enjoy ourselves. Plus you get to see how all of us interact with each other. We have become a family. It’s our second year doing it and I have a funny feeling we’re going to be doing it again. When myself and Xander are on tour during the year we are also scoping out venues to bring the tour to and Moxie is always on the phone looking for new locations.

There’s an Indie Go Go page for the documentary. Where should people go if they want to contribute and what are some of the premiums?

The page is http://igg.me/at/burlesqueiscoming. Everything from free tickets to a show, stickers, specially made expansion pack for cards against humanity, your name mentioned in the documentary.

What’s your most memorable road story so far – besides meeting George?

Our show in Baltimore at the Ottobar – we were the first Burlesque show to ever sell out the Ottobar! Then after the show we all stayed at Kay Sera’s house, the Compound. She treated us like absolute royalty. We all woke up to a homemade breakfast and fresh coffee. Then we went for a swim in her pool.  We all had that moment of absolute Zen and we were all in amazement that this is our life. Then we packed up to perform in a sold out show at the Trocadero in Philadelphia! It was amazing and it makes me so grateful that this is my life and that I get to share it with some amazing people that I’m grateful enough to call friends but are more like family.

That’s a sweet couple of days. What’s up next?

Well as of tonight when we wrapped up our show in Rochester, NY we are officially at the halfway point. Next week we start our touring to Santa Fe, New Mexico right after the DC show and we will be on the road for almost two weeks

I know it sounds kind of scary – but I wouldn’t have it any other way! 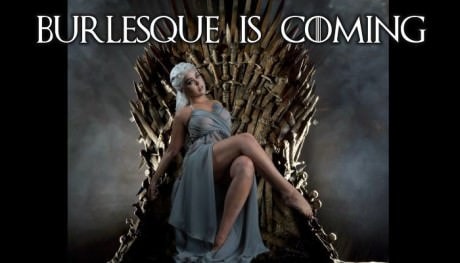