Mary Martello is a master thief. Anyone who’s seen her play supporting roles in shows as diverse as Memphis, 9 to 5, and Candide knows that this five-time Barrymore winner is an expert at stealing a show. So it’s fitting that she’s the center of attention in The Shoplifters, playing a woman whose sticky fingers have just gotten her into trouble with a pair of supermarket security guards.

If only The Shoplifters were worth stealing. Morris Panych’s play is stocked with terrific jokes which Martello and her co-stars deliver with aplomb. But the play, the season opener at 1812 Productions, also aims to be a social commentary, and it’s too tentative to hit most of its targets.

We’re in the storage room of an unnamed supermarket; Lance Kniskern’s set consists of cinder block walls nearly hidden by stacks of cardboard boxes. Veteran pilferer Alma (Martello) has just been nabbed for sticking a couple steaks up her skirt, and security guard Dom (Daniel Fredrick) is out to make her crack… but it’s his first day on the job, and he’s not having much luck. “Mister,” she tells him (in one of Panych’s many pithy lines), “you can’t even keep your acne under surveillance.” Alma’s accomplice, Phyllis (Marla Burkholder), is so anxious and guilt-ridden that she seems on the edge of ruining Alma’s scheme.

Chief guard Otto (Johnnie Hobbs, Jr.) is assured in his interrogation, but Alma seems unbreakable. Instead, it’s Otto that’s been broken – his health has been ruined by thirty overworked years toiling for a faceless, uncaring supermarket chain. And now the corporation is about to kick Otto to the curb. Is stealing from such a heartless, amoral company really a crime? Is anything black and white in a situation like this?

It’s a significant question, but while Panych delves into social criticism a bit, he’d rather just tell jokes. Yet while the jokes are good, the situation supporting those jokes becomes repetitive. And while the characters are appealing, there’s not much complexity to them. The bond between Alma and Phyllis is never explained sufficiently; why the seasoned Alma thought the hyper-nervous Phyllis could pull off this caper is a mystery. And the clash between Dom and Phyllis – he’s a devout Christian, she’s a horoscope reader who doesn’t even recognize his Bible quotes – seems far-fetched.

Martello’s Alma is sturdy and steadfast; she makes even the character’s most outrageous pronouncements worth listening to. Even if you think Alma is completely wrongheaded, Martello’s conviction makes her impossible to dismiss. And Hobbs gives his character a touching vulnerability and unexpected depth; he and Martello have great chemistry. But the other characters don’t have enough depths to explore, so Burkholder and Fredrick resort to mugging to keep things interesting.

Jennifer Childs’ direction keeps the laughs coming till the end, but it’s this fabulous cast who must be seen! 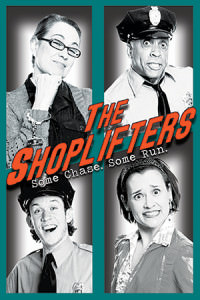 The Shoplifters, part of the 2015 Philadelphia Fringe Festival, plays through September 20, 2015 at 1812 Productions, performing at Arden Theatre Company – 40 North Second Street, in Philadelphia, PA. For tickets, call the box office at (215) 592-9560, or purchase them online.