Hitch up your wagon, take one last visit to Matt’s General Store, and say hello to your teenage years once again. Flying V is serving up a healthy dose of nostalgia with their current production of The Oregon Trail by Bekah Brunstetter, directed by Amber McGinnis Jackson, and presented as part of the Women’s Voices Theater Festival. Fans of the wildly popular 90s video game will be excited to walk into The Writer’s Center lobby transformed thanks to Audience Designer Tia Shearer Bassett, and complete with a general store and campfire where you can circle the wagons. Brunstetter’s play, however, goes beyond nostalgic tropes to ask very serious questions about hereditary melancholy, overcoming sadness, and the definition of hardship.

The story follows a pubescent teenager dealing with a recent school change, difficult parents, a perfect older sister, and a big crush on an older guy in school. Jane (Madeline Key) creates a parallel Oregon Trail avatar, also named Jane (Kelsey Meiklejohn), whose computer game life we see simultaneously played out in detail. Then Jane, as the script calls her, lives in 1848 and is travelling to Oregon with her difficult father and perfect sister. See any parallels yet?

In the original game, the convention is for players to receive several options, different paths to choose from. Selecting from the given options goes smoothly for a while, until suddenly, the computer game (voiced by Zachary Fernebok) takes over. It now not only determines life on the Trail, but also life in the present, purposefully limiting Now Jane’s options, until she ends up pushed and pulled through time into a life that she didn’t choose.

The concept is bizarre, the juxtapositions extreme, but it is surprisingly easy to buy into. Helping us suspend a good amount of disbelief are the multi-period costumes and jigsaw puzzle set, both expertly designed by Kathryn Kawecki. There are a few odd moments of singing that are a bit baffling: though the music – covers of 90s songs featuring lyrics about angst and searching for optimism – was tonally appropriate, it wasn’t always justified by the circumstances, and the un-mic’d actors were occasionally difficult to hear when they suddenly launched into song. However, the script took full advantage of these anachronistic moments, to good comedic effect.

Now Jane’s struggle with unemployment and lack of direction is met with disdain from her older sister Mary Anne (Julia Klavans) who insists that Jane snap out of it; she doesn’t have anything to be upset about. There are people with real problems in the world. This is smartly juxtaposed by Then Jane’s life on the Trail, where she and her family (Ryan Tumulty and Klavans) are faced with the very real, unimaginable hardships of the vast unknown wilderness, lost family members, and, yes, fording the river!

These Trail scenes are enthralling to watch, thanks to wonderful and highly physical acting. Tumulty and Klavans in particular excel in the aforementioned river fording. They throw their bodies around the stage to great effect; it seems as if they truly are travelling through miles of rushing river water. These scenes are even more enhanced by Neil McFadden’s sound design, which paints pictures of a team of oxen and wide open skies.

As unfamiliar as the trials and tribulations of the Trail may seem to a contemporary audience, Now Jane’s personal and internal struggles are, in contrast, very easy to identify with. You don’t need to have clinical depression to understand how it feels to be in a rut, or to have experienced prolonged periods of unexplained melancholy that can be difficult to emerge from. Key is excellent at portraying Now Jane’s internal sadness without becoming lifeless or letting it overwhelm her characterization. She creates a truly relatable character, from her procrastination in the form of TV reruns, down to her disastrous date with her old school crush, Billy (Will Hayes).

It almost seems unfair to pit the two stories against one another. Mary Anne is right, after all: there are people in the world with problems far beyond losing a computer game or not knowing what to put on your resume. But both Janes learn that sadness doesn’t have to be a barrier you are always working to get past. If you accept that it is part of life, then you don’t have to always be worried about what options you chose incorrectly in the past, or where your path is leading you in the future. You can just live.

This is yet another great production by Flying V (though I suppose the term they’d use is “Awesome!”), a surprisingly thought-provoking piece, and an exciting start for the Women’s Voices Theater Festival. If you are a fan of the eponymous video game, if you want to be surprised, touched and thoroughly entertained all with a soundtrack of 90s angst, I highly recommend Flying V’s The Oregon Trail.

Just remember to beware of cholera! 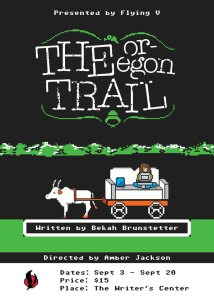 The Oregon Train plays through Sunday, September 20, 2015 at Flying V Theatre performing at The Writer’s Center – 4508 Walsh Street, in Bethesda, MD. For tickets, purchase them online.