The facade of a blue house dominates the stage at Fells Point Corner Theatre. Sliding glass doors and a kitchen window look out onto a concrete patio, where a grill, fire pit, and a small table with chairs are ready and waiting to be used. This is the set of Detroit, a play by Lisa D’Amour, directed by Michael B. Zemarel and produced by Andrew Porter. Detroit chronicles the friendship of two very different couples, set in backyards and taking place over fine wine and soda, caviar and havarti and canned cheese whiz and crackers.

Beth Weber and Greg Jericho play Mary and Ben. The picture-perfect patio we’re greeted with belongs to them, a couple who, at first glance, seem perfectly suited to their cookie-cutter house in the Detroit suburb of Bright Houses. But all is not what it seems.

The first act opens on an impromptu party. Mary and Ben have invited over their new neighbors, Sharon and Kenny, played by Rachel Roth and David Shoemaker. It becomes clear almost immediately that Sharon and Kenny come from a different walk of life. Their clothing, the way they talk – all of it is from a different world than Mary and Ben. And then we find out they met in rehab…. But despite their differences, both couples connect over their feelings of isolation, the desire to make real connections, and the wish to break free of their past mistakes and make new lives for themselves. They vow to become friends and to truly embody that old fashioned idea of  being “good neighbors.” It all sounds so hopeful and promising, and for the next two hours, we get to see it go slowly, terribly, and often hilariously wrong.

What makes this play work is how familiar it all is. Everyone has known or been one of these characters. Their concerns and triumphs are well-known, as are their mistakes. And this phenomenal cast taps into that familiarity and makes the characters real and relatable.

Mary and Sharon’s relationship is complex and powerful, and in these roles, Beth Weber and Rachel Roth dominate the stage together. Greg Jericho and David Shoemaker as Ben and Kenny are slightly overshadowed by the ladies large personalities, but in the second act, they share an uproariously funny boys-night-out conversation that gives us a clearer look at who these men are and how they’ve bonded apart from their wives.

Larry Levinson plays a small but crucial role, appearing in the final scene to tie it all together and wrap up the loose ends.

Detroit’s set, designed and constructed by Bush Greenbeck, is amazing. The house rotates to show the two different back yards, and is rigged with some very impressive tricks during the second act. There are several smaller effects as well. An umbrella rigged to collapse and a chair which breaks apart at just the right time are just two of the small but impressive effects that leave you wondering how they did it.

The costumes, provided by the cast, reinforce the differences between the couples. Mary’s pretty dresses and capri’s seem all the more conservation compared to Sharon’s Daisy Duke’s and cowboy boots. The same can be said for Ben’s slacks and button downs compared with Kenny’s ripped jeans and tee-shirts. It just provides one more element by which to compare the personalities of these four men and women and their unlikely friendships.

Chris Allen and Mike Zemarel designed the sound. The music that plays between scenes makes a great sound track for a lawn party, which is where most of the scenes take place. The other sounds are well designed, all of them well matched to the action on stage. Lighting Designer Charles W. Danforth III also does a great job, and the lighting of the climax is something absolutely spectacular. 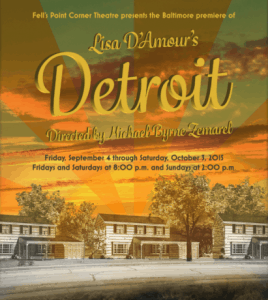 Finally, Kate Smith-Morse and Crystal Sewell stage-managed the play and the props with the help of Jennifer Marin. My hat’s off to these ladies as there are a lot of props to keep track of, and I’m sure rotating that set – amazing as it is – is no easy feat.

Fells Point Corner Theatre has a winning show on their hands with their exceptional production of Detroit. Their set is beyond spectacular, their crew is ingenious and on the ball, and they’ve brought this darkly comic script to life with a cast of talented actors. Don’t miss it!