I am as excited by the notion that stories from a woman’s perspective will dominate DC’s theatre scene over the next intense 6 weeks, as I am by the reality that many of these playwrights live and write in the Washington, DC area.

And, because there are 50 plus new plays, no “pipeline” or cultural “gatekeeper” has been hired to channel the content and, thus, stifle the dialogue. These new plays will speak directly to the local milieu, turning our theatrical culture into an artistic Petri dish, ideal for intense examination of a contemporary Nation’s Capital. 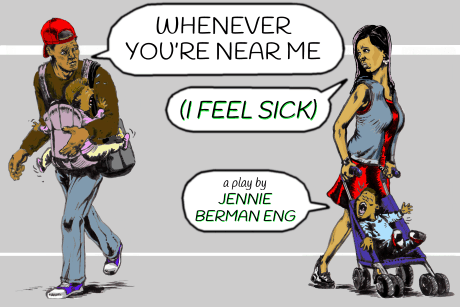 I am fortunate enough to know two of these playwrights, Jennie Berman Eng and Patricia Connelly, through my connection to The Playwrights Forum, founded by local playwright Ernie Joselovitz. I am also directing Pat’s Princess Margaret, which is running in repertory with Jennie’s new comedy, Whenever You’re Near Me I Feel Sick. Both are produced by Thelma Theatre.

I interviewed Jennie, one of Theatre J’s Locally Grown Playwrights. Her play premieres this coming Thursday, September 17, 2015, at the Trinidad Theatre, the new Capital Fringe theatre at their Logan Fringe Arts Space at 1358 Florida Avenue, NE, in Washington, DC.

Michael: In a nutshell, and without spoiling anything, what is the story of Whenever You’re Near Me I Feel Sick?

Jennie: Boy confesses love to girl, girl rebukes him. Girl spends the next decade wondering why she rebuked him, regrets her marriage, her kids, her career. Boy changes everything about him to please his wife, and feels lost. Girl and boy run into each other eight years later and finally have a chance at love.

I have to ask you about the title. From what strange place did you conceive that title?

Sometimes when my son asks me to sing to him I have a sudden and total lapse of memory. For no explicable reason, the only song I can recall is The Supremes’ song, “I Hear A Symphony.” It’s kind of a lullaby, I guess. When I was titling the play, I thought about these characters, Wendy and Andre, and their lives and how the person they love most is also the one they pushed away. They spend much of their adulthood apart, but think of each other often. And when they think of the other, is it a pleasant thought? Or is it wrought with blame and anger and hurt and longing? I wondered what pop song The Supremes might sing about these very flawed characters. An image popped into my head of Diana Ross, in a long gown and huge up-do, cooing in her saccharine-sweet voice, “Whenever You’re Near Me I Feel Sick”, and Mary Wilson and Florence Ballard in the back going, “So Nauseous, baby, baby…”  And then, that was it.

What ideas or images do you hope the audience will take away from this production?

This play is as much a love story as it is a story about a generation afraid to take a chance. These characters, Wendy and Andre, take the easy way out of a complicated relationship with each other, and marry other people. They have kids, and “good jobs”, and find themselves unsatisfied with all of it. The image of Wendy trying to work from home while shushing her screaming baby is an image I’d like audiences to remember. Wendy does all the things she is supposed to do in life as an adult, and none of it makes her happy. The conversation I hope happens after this play, on the Metro, on foot, in cabs, or in cars leaving Florida Avenue, is “does adulthood have to look the same for everyone?” I want audiences to root for Wendy and Andre to get together and mourn if they do not.

A new script is like an architectural drawing for a house. What’s it like watching it go up for the first time?

It feels like magic, every time, but this time strangely more so. I wrote the first scene of this play 11 years ago. I’ve worked on it in spurts over the years. Watching it go up is like reconnecting with an old friend (ironically, also the plot of the play). It’s a great privilege to work with these talented actors. Watching this “house” go up with them, is like drawing a shed, and getting an adorable bungalow with a rose garden.

Wow, the first scene 11 years ago.  When did you write the last scene and why did it take so long?

I wrote the rest of the play in the last three years. Why did it take so long? I guess the truth of it is that that first scene was supposed to only be a ten minute play. I took a look at it three years ago and became interested in the characters again. I wanted to see where they went after that first scene and what happened to them.

You are also directing the show. That’s like two hats. Do you ever get in an argument with yourself about what you’re doing with the text?

So when I said I wanted to direct this play myself a lot of people told me that was unwise and that it signaled a control problem within me. I knew what I wanted, though, and I’m glad I stuck to my plan. Whether I’ve done a good job or not remains to be seen, but the experience has been overwhelmingly positive. I will say to other playwrights looking to direct that you have to reconcile yourself to only playing the role of director. It’s pretty hard to do both (work on the script and direct). I’ve added and removed a line here or there, but major revisions have not happened as a result of rehearsals.

What’s it like being a part of this huge festival, of not only women playwrights, but of more than 50 mostly original stories all offered to 2015 theatre audiences?

I’m so proud and excited to be part of this historic festival. it’s not just a festival of female playwrights, but also of world premiere plays. That’s huge!  There’s going to be a vast range of female-written perspectives, which is important  for audiences to see. Because of terms like “chick flick” and “chick lit” people often associate female-character-driven stories with one kind of story with predictable characters and structure. Having this festival will illuminate not only how many talented female playwrights there are, but also how unique their voices are. Or maybe we’ll take back “Chick lit” and make it powerful.

For tickets and more information about Whenever You’re Near Me I Feel Sick, or Pat Connelly’s Princess Margaret, go to Thelma Theatre’s website.