The Audrey Herman Spotlighters Theatre kicks off their 54th season with the North American premiere of A Sensation Novel, a play in three “volumes” written by W. S. Gilbert. If that name sounds familiar, that’s because he was one half of the famed theatrical duo, Gilbert and Sullivan, who together wrote more than a dozen comic operas. A Sensation Novel is full of all the wit and word play audiences have long come to love and expect from W. S. Gilbert. And in the hands of Director Michael Blum and his cast, this largely overlooked play is finding new life in Baltimore.

The Author, played by Jim Knost, has entered into a contract with the Spirit of Romance, ensuring that he’ll be able to produce a new sensation novel every week. But he’s suffering writers block with his latest novel. Thus, he summons the Spirit, played by Brian Kraszewski, to discuss his difficulties. We discover that the stock characters the Spirit has lent to the Author are actually all real people. Rather, they were.

All the characters of the Author’s novel are played by spirits whose sins in life have indebted them to the Spirit of Romance. But there’s a twist: the spirits are all very dissatisfied with the Author. The characters they play in the Author’s stories have the exact opposite temperament than they themselves possess. And their own romances are very different than what the Author forces them to do. Outside the novel, the virtuous heroine is really an aggressive, opinionated woman who’s in love with the villain – and she very much enjoys his harassment, thank you. And her sweet love interest is actually devoted to the femme fatale, who herself is a kind and matronly woman. The tension comes to a head in a final, comic battle of wills between the Author and his characters.

Each act, or “volume,” takes place after the Author has done his days work, when the spirits are allowed to shed their characters and act as they truly are. Jim Knost, in addition to playing the Author, plays Sir Ruthven Glenaloon, a Wicked Baronet and the villain of the Author’s novel. Knost is pleasant and demure as Ruthven, willingly falling at the feet of the heroine, Alice Grey, as she directs him to persecute her more in the story. It’s a sweet if twisted dynamic, with Knost bringing a ready supply of sweet.

The twisted comes courtesy of Autumn Boyle, who plays the not so virtuous Alice Grey. It’s almost hard to believe a character like Alice Grey could be written in the Victorian Era; almost, until you realize that Gilbert is satirizing the very stories which have formed many of our stereotypes about Victorian life. Grey is like a stick of dynamite treading the stage; explosive, unpredictable, and a touch violent. It’s hilarious. Boyle, with her innocent face and ingénue voice, is a natural fit for the virtuous heroine, but she smashes that image almost immediately and it’s so good.

Brian Kraszewski plays both the Spirit of Romance and the perpetually late Detective Gripper, whose tardiness enables the others to avoid the Author’s intended ending a little longer. Having seen Kraszewski in a number of roles this year, I have to say his performances as the Spirit and Gripper may be my favorites. The roles seem a natural fit for him and he embraces the weirdness of the characters with aplomb.

Evangeline Ridgaway plays Lady Rockalda, the Yellow-Haired Panther. Ridgaway is wonderful as Lady Rockalda; she’s refined, patient, and while she shows marked detest for the Authors’ writing, she’s also resigned to doing the job and doing it right. Ridgaway provides a calming energy to balance out Boyle’s  characters combativeness.  But both women can be downright dangerous when the Author pushes them too far. After all, while Rockalda is not a villainess herself, the Author has given her lots of practice behaving like one.

The final member of the cast is Connor Moore, who plays Herbert; the love interest of Alice in the novel, and the lover of Rockalda outside of it. Moor’s performance may be the weakest in the cast, which is to say that he’s still incredibly funny, it’s just hard to get a feel for his character when he’s not fighting with Alice.

One of the hazards of theatre-in-the-round is making sure every line is audible; A Sensation Novel is no stranger to this problem, as the characters make many casual asides towards the audience which can be heard clearly by one half of the theater but not the other. It’s still funny no matter where you sit and what you do or don’t hear, but you do get worried sometimes that you may have missed something important. That feeling isn’t helped by the play itself, which, like all Gilbert plots, is convoluted. But it’s all mostly clear, and if you somehow become really lost, summaries of each act are very helpfully printed in the program.

Though the play itself is more than 100 years old, the music is relatively new. The original music composed by Thomas German Reed has been mostly lost over the years. Using what works remained, and with some additional inspiration from Arthur Sullivan, Michael Nash has written a new score. Additionally, the performing version is unique to this production, having been created and edited by Director Michael Blum and Music Director Erica Rome. Erica Rome also plays keyboard in the show, and is accompanied on keyboard d by Bill Georg.

Alan Zemla’s sets are always one of the best parts of a Spotlighters’ production in my opinion, and once again, he’s lived up to my expectations. A striking shade of red, reminiscent of a Victorian boudoir, dominates the set with touches of white and black. A carpet is laid across the middle of the stage and a heavy wooden desk sits at one column. Throughout the theater is an abundance of decoration and paraphernalia. It’s a visual feast that gives the impression of walking into the middle of a BBC period drama. 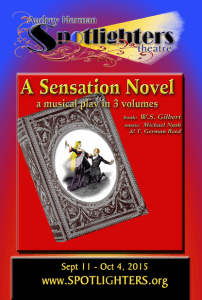 Carrying on that period drama atmosphere are the costumes. Fuzz Roark is responsible for the costume design, and the costumes themselves were provided by the House of Bankerd. Darcy Elliot is the costume assistant.

Fuzz Roark also designed the lighting, which is as dramatic as you’d hope to see in a melodrama. Megan Millane is the light board operator.

Darlene Harris stage manages this production and Ben Kinder is responsible for props.

A Sensation Novel is uproariously funny and a fabulous opening for Spotlighters’ new season.

A Sensation Novel is playing through October 4, 2015 at the Audrey Herman Spotlighters Theatre – 817 Saint Paul Street, in Baltimore, MD. Tickets can be purchased online. 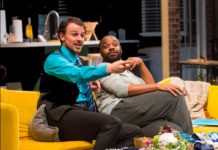 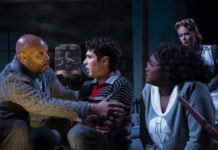 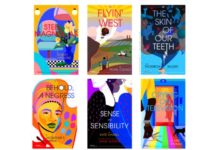