Laurel Mill Playhouse is a non-profit community theater group, originally known as the Burtonsville Players Inc., which has been putting on shows for local audiences for over the past 35 years. They perform out of their own theater space, a 100 year-old building that the group recently bought and renovated, right in the heart of historic Laurel, MD. At first, the stage and seating area seem small, but once the lights go down the room transforms into a beautifully warm and intimate space perfect for transporting audiences directly into the world of theater.

The Playhouse’s current production is Agatha Christie’s And Then There Were None. Lauded as Christie’s masterpiece and considered to be one of the best-selling mysteries of all time, this murder tale keeps the audience guessing right up until the final moments of the play. Fraught with multiple twist and turns, red herrings, and betrayals, the story opens with the scattered arrival of guests to a home located on an island off the coast of England, reachable only by boat. It is soon realized that, not only are the visitors completely unknown to one another, but not one of them has actually ever met their wealthy, and strangely absent, host.

Once the last of the party has arrived, a recorded message playsover the gramophone, one by one accusing the 10 strangers of having direct involvement in a suspicious death or murder, for which each managed to escape punishment. With skeletons exposed, the calm and civility of the unlikely group gradually begins to unravel, and the mystery begins.

William Stiles plays the unremorseful Anthony Marston and so accurately portrays the character’s repugnance that the audience practically rejoices to witness when he gets his due. Shortly thereafter, the true nature of their island invitation is discovered to be linked to the grisly nursery  rhyme “Ten Little Soldiers,” which starts: “Ten little Soldiers went out to dine; One choked his little self and then there were nine.’ The rhyme is ominously framed and displayed for the group to see, accompanied by 10 soldier figurines. When it is noticed that one of the ten soldiers is newly broken, it is suggested that the toys represent each of the accused guests, threatening to ultimately fulfill the poem’s promise until “then there were none.”

The nervous Mrs. Rogers is played by the delightfully anxious Ilene Chalmers. Nerves are frayed and suspicion mounts as the remaining guests realize that no one is safe and everyone is a suspect, until they are dead.

Larry Simons plays Sir Lawrence Wargrave, who subtly begins the interrogations of his fellow guests in an attempt to unveil the truth. Confessions are made, secrets are revealed.

Ron Able’s General MacKenzie is the first to fully succumb to the pressure of their apparent imprisonment. His is a tender character, who resolves to sit and wait for his long-dead wife to come for him.

Director Mark T. Allen’s set is simple enough, with sofas and a few chairs in a room. The blended green, blue, and gold colors of the room stand in contrast to the stark white print of the nursery rhyme framed and hanging above a mantel, which is decorated with the everdisappearing or damaged soldiers, along with assorted libations which serve to calm the unnerved guests.

In true Agatha Christie style, there are humorous moments that help to ease the unrelenting tension that only intensifies as the play progresses. The roles of William Blore (Chris Carothers) and Fred Narracott (Rocky Nunzio) offer subtle physical characteristics that complement the wit of Christie’s dialogue and garner many a laugh from the unsuspecting audience.

Phyllis Kay portrays the prudish and uptight Emily Brent, who stands on her self-proclaimed moral high-ground at the expense of the other characters, most notably the un-seen host’s secretary, Vera Claythorne, acted by the fetching Emma Jensen. Playing the charmer to Emma’s ingénue is Kyle Kelley as Phillip Lombard. Philip and Vera’s flirtation offers a sense of light and hope in an otherwise especially dark tale, but as the body count increases even their burgeoning romance is unlikely to survive.

Notably, Mark T. Allen is a man of many hats, as the director of this engaging performance, as well as the scenic design. Eric Gasior did the fine lighting design. The project is clearly a labor of love for the entire cast and production crew, with each member touching multiple aspects that help to make the show the success it is. All of their hard work ultimately pays off. This suspenseful production is one that is not to be missed.

Running Time: 2 hrs and 20 minutes, with one intermission. 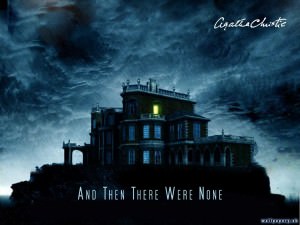