Anna Ziegler’s Photograph 51 kicks off the Lantern’s 2015-2016 with a bang. Set in London 1953, this 2008 play tells the story of Dr. Rosalind Franklin and her surrounding colleagues racing to discover and theorize the structure of DNA.

Ziegler, a nationwide-produced playwright, uses an interesting technique of reality versus the narration of outside characters.  The technique of other character’s telling Rosalind’s story as it is unfolding before our eyes is an incredibly successful technique.

Barrymore nominated Lantern Associate Artistic Director Kathryn MacMillan magnificently brings these real scientific figures to life. After directing over a dozen of Lantern’s productions, including the similarly academic Arcadia, MacMillan brilliantly combines the historic content and hyper-realistic narration. The characters frequently jump from past to present to somewhere unrepresented by time or space, and MacMillan facilitates this difficult situation with ease.

MacMillan has chosen the perfect cast to tell this story; they all excel in their roles. Geneviève Perrier shines as the strong female lead, embodying the methodical, caustic personality of Dr. Franklin with ease and comfortability. Perrier has the incredible ability to connect with each and every actor through a variety of different scenes. She has biting wit and heartbreaking sorrow simultaneously: everything that I can imagine the real Dr. Rosalind Frank was and more.

Favorited scenes in the show were those between Dr. Rosalind Frank (Perrier) and Dr. Maurice Wilkins (Joseph McGranaghan). The combative work environment makes some of the most encaptivating dialogue, especially when the walls come down for the powerful last scene. Add an incredibly charming Ray Gosling (Harry Watermeier) for some much appreciated comedic relief through the intense scientific themes of the show, and the scenes get even better.

The entire design is stunning and cohesive. Shon Causer’s lights give the ability to distinguish between reality and outside narrative, which is no easy feat. The variety of lights, from stark back panel lighting to warm front light, gives a beautiful ability to represent both worlds.

Lantern’s Production Manager Meghan Jones created an ingenious scenic design, malleable to suit the various different locations within the show. The curved top shape (reminiscent of a double-helix itself) juxtaposes the angular squares of the desks and stairs throughout in a scientific green and white color scheme.

Costume design by Janus Stefanowicz created wonderfully appropriate period costumes with the ability to add or remove specific pieces for changing time and space. The simple addition of lab coats gave the audience the exact location without a need for anything else.

Larry D. Fowler, Jr.’s sound design consisted of quick, simple instrumental transitions to break up some of the scene changes. They were used sparingly and appropriately. 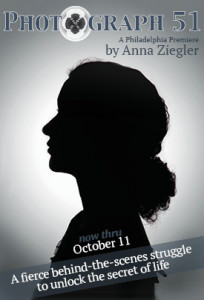 Photograph 51 actually just began its run on the West End in London starring Nicole Kidman earlier this week. But lucky for us, we get to see a quality production right in our back yard.

Running Time: Approximately 1 hour and 40 minutes, with no intermission.