Whenever You’re Near Me I Feel Sick, a new play written and directed by Jennie Berman Eng and produced by similarly nascent company Thelma Theatre as part of the Women’s Voices Theater Festival is a ballad of sorts to those artists who find themselves growing older and more conventional as their 20s pass, trading shot glasses for sippy cups and graphic tees for button-downs. Andre and Wendy (Ricardo Frederick Evans and Ariana Almajan, respectively) are childhood friends who move together from Bethesda to New York to make it in the film business, only to see their dreams derailed by moves, spouses, and babies. As the years pass they never quite forget one another, and as their dreams of a wild artistic life fade they begin to look back on their friendship with a sickly sweet yearning. 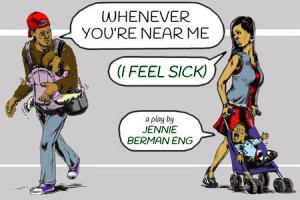 The essential question posed by Whenever You’re Near… of “How late is too late to go back and change your life?” is a potent one that bears asking, particularly as it relates to women. Wendy is a strong character who is not cut out for motherhood and she is ready to make certain choices about her life and family that society considers rather shameful. And perhaps it is unjustified to leave one’s spouse and children to pursue one’s youthful dreams, regardless of gender. Nevertheless, Wendy, who actor Ariana Almajan endows with great fire and angst, is an unabashedly independent woman who eschews traditional domestic gender roles.

This is a critical perspective to include in the Women’s Voices Theatre Festival, which, in its sheer magnitude, ought to include stories about women who view their conventional roles with skepticism and even contempt. Andre is a less fleshed out character who bears resemblance to the prototypical millennial man-child who has strong views about early punk theory but is clueless about wives and babies. But Ricardo Frederick Evans presents a joyful, relatable Andre that makes him fun to watch.

The production itself needs some work to match the ambition of the script. The pacing was too slow and the staging too stagnant, and the addition of side characters like a Ukrainian day care operator and hypochondriac film hand (both played with great humor by Taunya Ferguson), while amusing, distracted from the central relationship between Wendy and Andre. And, with its multiple shifts in location and time and its focus on dialogue, the text seems more inclined towards a screenplay than a stage play. A notable exception to this is a scene of magical realism where Wendy speaks with a disembodied airport announcer voice (also played by Taunya Ferguson) who urges her to abandon her quest to re-connect with Andre. This scene seemed quintessentially theatrical to me, and I wished that more scenes in the show had the same quality and pace.

The sound and lighting design (Jonathan Powers and Sarah Chapin, respectively) are energetic, and the music is original, by the group Sonic Boombox. Scenic Designer Jack Golden has an eye for good props (I particularly appreciated the pink toilet and Andre’s omnipresent craft beers) but the large, angular, sleet gray set pieces seemed more Soviet than 20-something. Dan Kempner, as projection photographer, brings an interesting projection element that offers a kind of family photo prelude to each vignette. But the projections fall off towards the end, diminishing their impact.

Thelma Theatre should be applauded for providing a vehicle for a new work that poses such cogent and relevant questions about growing up as part of a generation where we’ve been told since T-ball that we could do whatever we wanted, and by age 20 something we realize it isn’t true. It is an important piece to produce in the millennial den of NoMa, and its uncomfortable provocations of what it means to be a good mother, a good woman, are a welcome addition to the Women’s Voices Theater Festival.

Running Time: One hour and forty five minutes, with no intermission.

Spine: An Interview with Playwright Jennie Berman Eng on ‘Whenever You’re Near Me I Feel Sick’ and The Women’s Voices Theater Festival by Robert Michael Oliver.

Whenever You’re Near Me I Feel Sick plays through October 4, 2015 at Thelma Theatre, performing at the Trinidad Theatre in the Logan Fringe Arts Space – 1358 Florida Avenue. NE, in Washington, D.C. Tickets may be purchased at the door or online.