There are between twenty-one to thirty million men, women and children  enslaved today (Allies Against Slavery). There are between one-hundred to three-hundred thousand children at risk to be forced into the commercial sex industry in the United States. (Estes & Weiner 2001)  According to the U.S. Department of Justice, eighty-three percent (83%) of victims confirmed in human sex trafficking are in the U.S., and are U.S. citizens.

Forsaken Angels, by Wolfpack Theatre Company, written and directed by William Leary, author of DCMetroTheaterArts “Best of 2014” award-winning Masquerade, tells the story of three people who take you into the harsh and degrading world of sex trafficking. The play opens with a beautiful song, “Broken Wings,” with lyrics written by Jolene (who plays Jolene, a drug-addicted prostitute in the play) and Composer Daniel Plante, and sung by Brigid Lally.

The play opens to the introduction of two women, Audrey and Samantha, played by Kelly Richards and Melanie Pino-Elliott as adults, and one man, Alex, played by Dwayne Allen. They are the unfortunate victims of sex trafficking. Their stories are told in a way of a “wake up” call for those who may not be familiar with sex trafficking or who are aware, and need to take immediate preventable action.

Richards and Pinot-Elliott are seen throughout the performance in their narration, at opposite ends of the stage. They are seated, facing the set, instead of the audience. At times, it was difficult to see Richards as she spoke. Pinot-Elliott did get up to face the audience a few of times, and this could have been a benefit to the both of them. Allen, however, did face the audience, which was helpful.

As Audrey and Samantha tell their story, we find that their home environments were completely different. Audrey’s environment is that of a loving middle class home. Her mother, Gloria, played by Erika Harper Townes, is a typical, concerned mother of a jubilant, rambunctious, carefree pre-teen Audrey, played by Brawnlyn Blueitt. Blueitt’s portrayal of a young Audrey is so convincing of a middle school girl. Young Audrey is a good girl; she gets good grades, and knows how to get what she wants from her mother.

It is Christmas vacation, and she wants to spend it with her best friend, Kayla, played by Vanessa Berben. Audrey dreams of being a princess, like Ann Hathaway in the Princess Diaries. After all, a princess will become queen one day, marry a king, and her subjects will have to do what she says. Kayla, understands this, but reminds her friend that a “woman can get it on her own.” When Audrey impersonates a queen, and make Kayla her notable subject, Kayla says to her, “Maybe you should have elective surgery for your ego.” A ski trip is planned for the girls’ Christmas vacation, but there’s a twist. Audrey has met a young man online, and she is all too delighted to tell Kayla. Audrey plans to meet up with him during their trip.  This doesn’t sit well with Kayla, and she attempts to give rational reasons why meeting him is not a good idea.

In contrast to Audrey’s life, Young Samantha’s (played by Sara Castillo) home environment is not short of a hell hole. She is raised by her drug-addicted, prostitute mother, Jolene (Matthews). Young Samantha is also a good girl, but finds it increasingly difficult to maintain this innocence, with the revolving door of men that are her mother’s “Johns.” She has an encounter with one, played by David Insogna, who for a brief surprisingly moment, seem to want to help her. But if Jolene has anything to do with it, this will never happen. The up-and-down, bipolar-like and violent mood swings Jolene has, one could not have anything but empathy and pity for Young Samantha. Where is Child Protective Services when its needed?

It is very confusing for this young Samantha (Castillo) to love or hate Jolene. There are moments of tenderness Jolene has for Young Samantha, but they are cut short, as she constantly belittles, berates, and threatens Young Samantha. And accuse her daughter of why she couldn’t leave the lifestyle that her mother had introduced to her. “I had dreams, then I had you,” Jolene says to her daughter. There is one tender moment that Jolene agrees to have a “good Christmas” with Young Samantha. Jolene agrees to buy a pretty red dress for her. Samantha is thrilled. Little does Young Samantha know, just what kind of “good Christmas,” Jolene has in store for her.

And then there is Alex, played by Allen. Although his life is not dramatized, when he tells his plight, being ostracized by his family due to him being gay, and meeting his “true love,” in a hotel room, a person only has to close his/her eyes to visualize the pain, suffering, and heartbreak he endured. Allen’s portrayal of Alex, moves you to get up out of your seat, and offer him a place to live and a fresh start. How could the man who promise to love and take care of him , turn on him, and sell him for profitable gain.

Audrey, Samantha and Alex’s paths cross in the sex trafficking arena. For Alex, it is survival. Audrey and Samantha are sold into it. We meet “Queenie,” played by Carol V. Calhoun. Calhoun gives a good performance as the non-empathetic, cruel, money-hungry pimp of Audrey and Alex. You hate her so much you want to send her to the firing squad. Blueitt and Castillo transformation from sweet innocent girls to grown-up sex workers is both amazing and sad. Allen’s Alex has become hardened, but still shows a bit of innocence. He longs for his “true love.” What happened to him?

Samantha’s pimp is the smooth and distinguishly handsome, Aiden, played by Andre Pearson. He is charmingly manipulative, but has met his match with Samantha. She has learned a lot from her mother, but is not her mother. She has survived this nightmare, but wants out. As does Alex and Audrey in their own respective way. Samantha wants to help them. Her take charge, ‘I’ll take prisoners if I have to’ attitude is refreshing. Will the three have a happy ending? 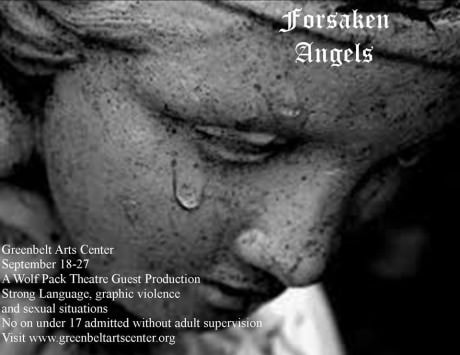 Running Time: Two hours and 20 minutes, including one intermission.

Forsaken Angels plays through September 27, 2015 at Wolf Pack Theatre Company performing at the Greenbelt Arts Center – 123 Centerway in Greenbelt, MD. For tickets, purchase them at the door or online.