In Chesapeake Shakespeare Company’s production of Much Ado About Nothing, there is an endless menu of farce devices, a beautifully carved and textured faux-marble façade (Daniel O’Brien, the technical director’s, contribution) and Scenic Designer Kathryn Kawecki), lavish Edwardian dress (designed by Kristina Lambdin, who even delivers when one gives her military coats a close look at the buttons), and gloriously insane choreography and music, ensure all the romance, laughter, and delight worthy of one of Shakespeare’s finest comedies.

Director Matthew R. Wilson, founder of the commedia dell’arte troupe Faction of Fools, stages each scene meticulously, from Keystone Cops chase sequences, to period dances to shifting garden scenes marked only by light shifts and mimed doors (he takes the liberty of altering the text to make two sequential scenes of friends manipulating Beatrice and Benedick into love overlap, enhancing the farcical mayhem), to even the circular bows. The music is charming and includes an embarrassing attempt at a love song sung by Ron Heneghan and a grotesquely off-key Ragtime version of “Sigh No More, Ladies” led by Jeff Miller (Balthasar, who is described in Shakespeare’s text as an “ill singer” but rarely played as such).

Wilson is a master of comedy. His concept of a Downtown Abbey inspired WWI England works exceedingly well and his cast fulfills his version to perfection. Their work is thoroughly amusing, especially Ron Heneghan, who times every beat in Benedick’s lines flawlessly. Even lines that are not especially funny, like “Talk not of her … you shall find her the infernal ate” he delivers with hilarious timing. Actors gallop, or hide behind rose pots they are wearing on their heads, or fall as a group through a door they have been listening at, or sit on an actor pretending to be oblivious to his presence. All actors fit their roles nicely, from the grim, villainous, and apparently elder, brother of Leonato, Don John (Jeff Keogh) to the coquettish Margaret (played with charisma rarely seen in this unscrupulous secondary character by Kathryn Elizabeth Kelly).

Yet the challenges of Shakespeare’s text do cause some problems: Audience contact is present but inconsistent. Some actors, like Scott Alan Small (Dogberry) directly manipulate the audience in their bits (Small makes the audience finish repetitions of the line “I am an ass”). Others, like Blythe Coons (in a performance of Beatrice that is appropriately powerful and delicate in turns), play to the audience as a crowd, without direct reference to individuals, even when pushing her way through the front row to hide. Though the humor is maintained through the harsh failed wedding scene with well-timed lines like “This looks not like a nuptial,” it falls flat in a few scenes later in the play, particularly when Michael Salconi’s Leonato accuses Don Pedro (Jose Guzman) and Claudio (Gerrard Alex Taylor) of causing Hero’s (Diane Curly) death, while E. Martin Ealy’s Antonio promises that they “shall kill two of us.” With Ealy playing up a clown voice while Salconi drips with rage, it is unclear what effect Wilson intends. Fortunately, these journeys into awkward pathos are quickly forgotten as the celebratory reunion scene pulls the audience back into the heights of romance and humor.

Chesapeake Shakespeare Company’s production of Much Ado About Nothing ultimately works to draw nearly as many laughs as Shakespeare’s text offers, and the nearly three hours of Shakespeare thoroughly entertain. 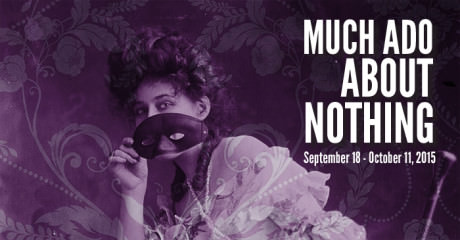 Much Ado About Nothing plays through October 11, 2015 at the Chesapeake Shakespeare Company – 7 South Calvert Street, in Baltimore, MD. For tickets, call (410) 244-8570, or purchase them online.