Think the promise, even the future of American theater lies in the hands of those imaginative, impassioned, gutsy young Millennials who for the last several years have musically and dramatically set Broadway and DC metro stages afire? If you do, all I can say is, don’t look now: they may soon be the new “establishment,” at once up against and nurturing (either hands-on or at one remove) a new generation of practitioners who may have not only the talent and energy to follow in their path, but the potential to blaze their own.

The Requiem, written by 15-year-old Madison Middleton and part of the Women’s Voices Theater Festival, was introduced to DC theatergoers earlier this month at The Kennedy Center’s Page-to-Stage Festival, and is currently playing at The Highwood Theatre in Silver Spring. A play that “explores music and memory-loss,” as well as the fragility and unpredictability of human relationships—Highwood’s theme this year is “The human network”—it is a remarkable effort for one so young and her equally youthful cast and crew, joined by the only “grown-up,” Director Eva Silverman, whose experience working with them manifests itself in the fluidity of much of the production.

As the play begins, a teenage girl, her dark hair pulled back in a tight ponytail, scratches out the opening measures of Vivaldi’s “Four Seasons,” her violin conspicuously out of tune.  (Significantly, it is, we will learn, Leland’s favorite piece.) A striking young woman (Shannon Leach) is dropped off by a taxi, her lustrous red hair boy-cut short, bangs to the side. Her name is Maria; she, too, holds a violin. But it is in a case by her side.

From the start, Leach portrays Maria as someone to be reckoned with. Graceful yet purposeful, she strides into her old home; finding it dark, she is surprised to hear the opening chords of Mozart’s Requiem coming from upstairs. Going up to investigate, she finds that it’s coming from the record player in her room. Hearing her parents arrive, she changes course and goes back down to greet them.

Rather than welcoming her with warmth, Maria’s parents make no effort to disguise their discomfort and uncertainty (her father, played by Colin Sidley, is oblivious by nature, as a protective mechanism, or both) or outright displeasure, if not hostility (Haley Shea, as her mother: stressed out and high-strung to the point at which, were she a violin, you’d be waiting for a string to snap) at her unexpected arrival, and almost immediately ask when she’s leaving.  Seems her grandfather Leland, who abandoned Maria’s mother in childhood, along with his wife, who struggled to raise her and died young, has turned up decades later, apologized profusely, and—having no place to go—installed himself in their home.  Which is to say: Maria’s room.

The old man (Max Rome) immediately accosts Maria when she walks in to the anguished strains of the “Lachrymosa,” and challenges her musical knowledge and taste. (She prefers Vivaldi and the Mozart concertos.) Maria doesn’t take this well, having been bruised by her inability to translate prizes and acclaim into a career or paying profession, and having salt now rubbed into the wound by her parents’ lack of sympathy, and this strange old man having been given her bed, leaving her the couch.

Assessing her options, Maria does her research, finds a reasonably priced rest home and approaches Leland, who senses what she’s come to tell him and turns up the record player to ear-splitting volume as the chorus bursts into the “Rex coelestis majestatis.” He quickly switches gears, though, and asks Maria if she knows the tragic circumstances under which Mozart composed the Requiem, which he was commissioned to write for a patron and said, as if knowing his present suffering would be his last, that it would be his own. He relates the story twice; and when Maria gently tells him, he hobbles over to the phonograph, his face twisting into a confused half-smile, and shouts at her to get out.

Sidley’s Timothy (the father) alternates between gruffness and indifference toward his daughter but insists that his wife care for her own father; to which she heatedly responds that Leland didn’t care whether she and her mother lived or died, and knew in the end her mom was dying. Why should she care about him? Shea seizes the emotional complexities here, equal parts justified anger, self-justification and anguish; as if on cue Leland walks in, a desk clock in his hand, and asks if someone—clearly they are all strangers to him—can tell him what the symbols on it are.

Back in the bedroom, he finds Maria’s violin and picks it up, remembering being taught to play one as a child, and begins to handle it clumsily and roughly, breaking a string. Maria explodes, all of the resentments and injustices coming to a boil, and yells that he had no right to touch it, hurling his precious records to the floor and smashing them vigorously, the large, heavy disks landing with decisively—if not, in a sense, even fatally—loud whaps. Real LPs, they split and break into pieces. He again smiles; here, Rome suggests a combination of the earlier confusion laced with a perverse satisfaction.

The spectre of Alzheimer’s Disease haunts the lives of more and more people as the population ages. Tens of millions of them, and their families, loved ones and caregivers, deal with its devastating impacts, while those who have not been touched by it live with the knowledge, often understandably hoping-against-hope unacknowledged, that it could one day strike without rhyme, reason or warning. That a young woman in her mid-teens would want to take up this issue and construct a play around it—produced and populated largely by her cohort—and succeed in portraying it without pandering to it or to her audience, is worth celebrating in itself.

That does not make it a wholly successful enterprise, but certainly one worth coming out to see. Middleton, Silverman and the actors create dynamics within and between the characters that are sometimes effective and persuasive, but at other times are not fully realized or lack sufficient foregrounding to make the unexpected revelatory.

The set is simple but ingenious and flexible, with a dozen or so stackable, four-legged, soft, lightweight black cubes serving as both chairs and tables (Prop Design by Kelsey Murphey; Stage Manager, Orion Stekoll) while the Requiem also serves as occasional background music as well as carryover music between scenes (skillfully carried out by Sound Board Operator, Toly Yarup).

One technical problem is that the unobtrusiveness, ideally, of set changes is compromised by the loud squeaks of what I’m guessing are people’s shoes, which—perhaps because the changes are done under cover of darkness, which is usually what makes them less noticeable—temporarily shatters the fourth wall. The black-box theater is a very intimate space: some 16 seats (with more stacked by the walls if needed) are set directly behind the stage along its four sides: a 5″ high, rectangular black wooden frame surrounding a recessed metal grate that, in turn, sits atop a black grid comprising 60 segments, a light bulb set in each. (Set Design by Phoenix Ganz-Ratzat.)  Above, LED moving-head lights, both round and rectangular, each with blue, green and red strips of light, accent or illuminate the action on stage.  (Lighting Design by Simon Ellerbe.)

In the Page-to-Stage preview, the violinist who skillfully played the opening music “makes [it] a living, breathing character,” Middleton told us. It still is, but in a different way: it is not the living spirit of the physically ravaged yet creatively powerful, invincible, immortal Mozart, but the dying, struggling, cracked strains of dementia. As Middleton has no men in her home, to create male characters, she told us, she draws on her imagination or models them after people she “really look[s] up to,” such as Sir Ian McKellen, who inspired the character of Leland.  Max Rome, who plays him, said that he is strongly attuned to the need to treat Alzheimer’s disease, and those who are living with it, with sensitivity and dignity.  “It’s so important to get it right,” said Silverman.  In Requiem, Silverman, Rome, and their associates generally, and sometimes compellingly, do. 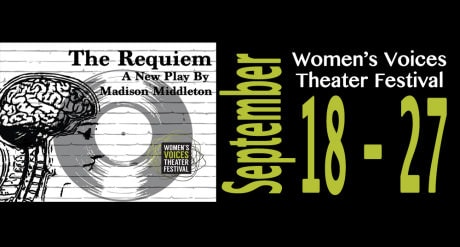 The Requiem is playing through September 27, 2015 at The Students’ Theatre performing at The Highwood Theatre  – 914 Silver Spring Avenue in  Silver Spring, MD. For tickets call (301) 587-0697, or purchase them online.