TimelessTease Productions, a young burlesque troupe out of Baltimore, burst onto the scene last year with a very elaborate and scripted production, Steampunk Seductions. Since then they’ve done some of the most celebrated burlesque variety shows in Charm City and are now about to produce their second major scripted show, the classic TV show-themed Nips at Nite at the Mobtown Ballroom on Saturday, September 26 at 7:00 and 10:30 pm. I had a chance recently to chat with the four core members of TimelessTease – Jules V. Moorhead, Betty O’Hellno, Whiskey Joy, and Lizzy Falltrades.

Since this is pretty much my first time interviewing everyone let’s start with name, tagline, and when and why did you get into burlesque?

Jules: Jules V. Moorhead – “Moorhead, at your service.” Got into burlesque after seeing Trixie and Monkey about eight years ago at Ottobar. Started producing last year and started performing in January of this year.

Whiskey: I’m Whiskey Joy – “She takes a little nip and does a little strip!”. I’ve been doing burlesque for two and a half years now and got into because the idea of it was alluring and terrifying.

Betty: Betty O’Hellno – “That One Flat-Chested Girl!”. I started doing drag at MICA. I would make up characters for video projects and most of them were neo-Victorian socialites who performed plastic surgery on themselves. Then my Junior year, I worked on a burlesque show in a class taught by Trixie Little and the Evil Hate Monkey. FELL IN LOVE WITH IT. But didn’t pursue it until sometime later after talking to Gigi Holliday about doing a show.

Lizzy: Lizzy Falltrades – “The wench with a wrench.” I am not technically a burlesque performer but have been stage managing and other miscellaneous things with TimelessTease for a bit over a year now.

How did TimelessTease come about?

Betty: Jules and I produced a charity show for Moveable Feast last April and enjoyed the challenge immensely! We decided to keep doing our thang and over the course of several late night Bun Shop meetings we devised a scheme to become time travelers, build a very phallic time machine, and travel through space and time to seek out adventure with brilliant performers!

And how many shows have you done so far?

Jules: Nips at Nite will be our fourth as TimelessTease, fifth if you count that first Hot Dish charity show.

Whiskey: Nips at Nite will be our second fully scripted show.

So with the scripted shows time travel seems to be the theme.  Is there an overall theme for TimelessTease Productions?

Lizzy: Yeah, the time traveler “mythology” of TimelessTease is carried through the scripted shows, but we’re still our characters at the variety shows.

Betty: All of our shows have a camp quality and a queer sensibility taking notes from John Waters, Carol Burnett, slapstick comedies, and Mel Brooks to name a few!

What are some of the classic TV shows that will be homaged (I don’t think that’s a real word) in Nips at Nite?

Jules: Seven different shows from The Brady Bunch to I Love Lucy.

Lizzy: And some era-appropriate surprises.

And how are you tying them together?

Jules: The time machine is the common factor, of course.

Whiskey: With bad puns, good wit, charm, carpet tape and a heck of a lot of costume changes!

Lizzy: So many wigs. These beautiful jerks even got me to agree to a wig.

Whiskey: And that doesn’t count the layers we’re stripping out of! 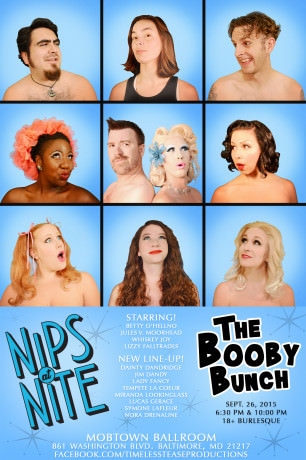 What’s the process of coming up with the script? Does everyone write?

Betty: Josh writes a brilliant outline script with the main storyline in place and we die. WE JUST DIE! Then he asks us to go in and give our characters a little bit more of our own voice. Then a week before the show we change everything and it’s still perfect and we DIE!

Whiskey: After we wipe away tears of hysterics we all pitch in and help flesh out the outline and tweak the storyline. It’s very much a communal effort with a great writer as a backbone. We’re lucky that we all have a similar sense of humor and very little collective ego. We’re really good at running with jokes, tweaking things and rolling with the punches as we collaborate – most days!

Betty: We just get drunk and yell at each other to change things until we start laughing again.

Lizzy: It’s iterative, as they say, and includes cocktails.

Whiskey: Betty and Jules make mean whiskey drinks, and it turns out Lizzy makes one heck of a Mint Julep. I am the control group.

Jules: Our next show is a co-production with Mourna Handful called Saints and Spinners on October 2nd on the mainstage of the Black Cat!  It’s a burlesque improve game show.  Then on October 30 we’re doing a show at the Virginia Independent Horror Festival in Winchester.

Whiskey: We sold out our first scripted show literally weeks before the show and the two cabaret shows we’ve done since then, so for Nips at Nite we’ve added a second show the same night to accommodate everyone and keep the fire chief happy at Mobtown!

Lizzy: Because stripping in old churches is delightful but violating fire code in them is horrible.

Was Mobtown Ballroom a church?

Whiskey: Yep! The space is a converted sanctuary and still has stained glass. 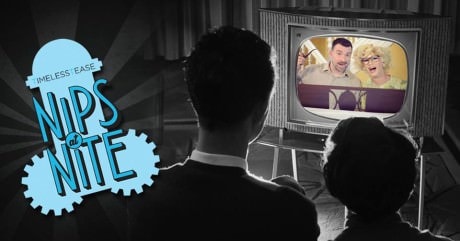