Princess Margaret, a world premiere by Thelma Theatre, is an intriguing new play about a Catholic school and the universal power struggle between student and teacher, teacher and administrators, and administrators and community. It’s a meaty script bolstered by solid performances.

Thelma Theatre, led by Patricia Connelly, who also wrote the play, is dedicated to producing theater by or about women. This production is part of the Women’s Voices Theater Festival.

The play revolves around Margaret (Allison Frisch) and two nun’s attempt to raise her out of poverty and ignorance.  Frisch lends a great physicality to the role – embodying an 11 year olds jumpy, hopeful presence well. Sister Anastasia (Elizabeth Bruce) represents the school of compassion and care.  Sister Helen (Taunya Ferguson) represents the opposite – that rules and humiliation will work best.

Bruce plays her role with sweetness and a certain solemn intelligence.  Ferguson follows in the best tradition of terrifying nuns – twisted and powerful, but strangely sympathetic as you watch her terrorize her classroom in the name of discipline and obedience. Monsignor Bryan (Andrew Walker White) represents the large community and church that also muck about in Margaret’s life and chances.

The play is at its best in that classroom as Margaret and Sister Helen circle each other – both needing and hating one another.

If had a critique, it is that Connelly and Robert Michael Oliver, the director, have succeeded too well. There’s a great deal of exposition before we see that classroom and the play bounces between Margaret’s school and home life with her terrible mother Felicia (Rebecca Hausman), who is as one-dimensional as Sister Helen is nuanced. Oliver stages the classroom well, deftly conjuring desks full of students with only one in the room; however when the lights go down, the scene changes drag out with a lot of location switching.

The set itself by Jack Golden invokes the 1960s with a few throw pillows and admonishing school posters, lit dynamically by Sarah Chapin. The grey walls are a perfect backdrop for the black and white of the nun’s costumes by Ashley Amidon. That sense of dramatic tension is enhanced by music and sound effects by Jonathan Powers, like the playing of children outside as Margaret sits being punished.

The details are impressive – from lights to costumes to performances to a nuanced script with no easy villain, unless it is ignorance itself. When the play is exploring that alone, it is very powerful. As this play receives more productions, as I hope it will, hopefully the team can find the heart of this and realize they’ve succeeded past their ambitions. With a cast like this, you don’t need whole scenes or different sets to explain things that are perfectly clear in a single glance or a single cutting line.

Ultimately, Princess Margaret is a character study of the terror and hopes to be found in a classroom and the trauma we pass on to our children. It’s a fascinating look at both. 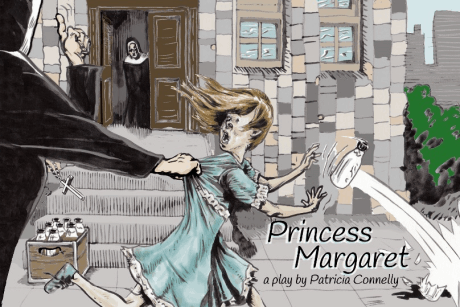 Princess Margaret plays through October 4, 2015 at Thelma Theatre, performing at the Trinidad Theatre in the Logan Fringe Arts Space – 1358 Florida Avenue. NE, in Washington, D.C. Tickets may be purchased at the door or online.