Attending an Elizabeth Gilbert speaking event is like attending a rock concert. The ardent devotion and following of her work is intense, but inspiring! I’ve been to a lot of book talks, but this was by far the most devoted faithful I’ve ever seen. Having it held in a synagogue added to the religious ambience. Her talk left everyone in high spirits, including mine. 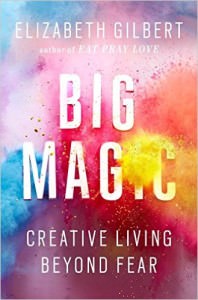 Elizabeth is in town promoting her new book Big Magic: Creative Living Beyond Fear. Her book tackles how creativity and fear go hand-in-hand.  She tells “fear” that “creativity” and her are going on a trip and – of course – fear is invited. However, “fear” is not allowed to give suggestions, choose snacks, drive, give directions, but just be along for the ride. Elizabeth believes killing fear means also killing creativity and they must go down the path together.

She also believes that self-forgiveness is the bridge to creativity, and strongly urged her audience to avoid anyone who describes themselves as ‘brutally honest’: “They are more brutal than honest and you must protect your creativity.”

Elizabeth finds it fascinating how people don’t indulge in interesting activities because of fear. Elizabeth shared a story of a woman who used to skate in her teens and loved it, but gave it up because she was never going to be a champion skater. Later in her 40s, she realized how unhappy she was so she embraced skating again and the happiness from that flowed over her.

Elizabeth wants everyone to embrace creativity and enjoy happiness. You don’t need to quit your job and life to seek creativity, but find it in your daily life. Elizabeth read some passages from her book before taking questions from the audience.

The passages she read talked about having the courage to bring the walking depositories of jewels inside us to the forefront. She describes creative living being driven by ‘curiosity versus fear.’

Elizabeth took several questions from devoted fans. An audience member shared how she is recovering from thyroid cancer and how Elizabeth’s book Eat, Pray, Love helped her overcome nausea. Elizabeth was clearly touched, but still threw in a funny anecdote, “Some of the press said my book gave people nausea, so glad to see it has the opposite affect too!” She also re-gifted a hope bracelet a fan had given her earlier to “Keep the good energy flowing.”

Another question posed to Elizabeth was, “What advice would you give yourself at 21?” She said, “To be aware of foreign entanglements” and not waste your time on love and men.” Elizabeth pleaded to the largely female audience to explore, travel, and enjoy their 20’s.

It was great spending an evening with Elizabeth Gilbert. If you want to feel inspired, enlightened and learn from one of Time’s Magazine one of the “Most 100 Influential People,” then do yourself a favor and go see Elizabeth Gilbert. She is touring the US and Europe until December.

Elizabeth Gilbert – Big Magic: Creative Living Beyond Fear took place for one night only on September 26, 2015 at Sixth & I Historic Synagogue – 600 I Street, NW, in Washington, DC. Check out their upcoming events.