A talking donkey, a singing ogre, a feisty princess, a sassy cookie, tap dancing rats, and a striking band of  misfit fairytale characters will be working their magic for children of all ages when Reston Community Players opens its 49th season with the Tony Award-winning fairytale adventure Shrek The Musical, October 16-November 17, 2015.

Shrek The Musical, which received twelve Drama Desk Award nominations and eight Tony Award nominations and features music by Jeanine Tesori (Violet, Fun Home) and book and lyrics by David Lindsay-Abaire (Rabbit Hole, Good People), transports the audience to the kingdom of Duloc, where a green ogre named Shrek finds himself on a life-changing journey alongside a wise-cracking donkey, a feisty princess, a “short”-tempered villain, a cookie with attitude, and dozens of misfit fairytale characters who prove that “what makes us special makes us strong.”

In this interview, we meet Paul Tonden and Jolene Vettese, who will be creating the characters of Shrek and Princess Fiona in the RCP production.

Diane: Please introduce yourself to our readers.

Paul: Hi! My name is Paul Tonden, I live in Reston, VA and I like warm hugs!

Jolene: Hi! I’m Jolene Vettese and I live in Herndon with my husband, two awesome kids, and work a government job by day. So I keep myself busy.

What shows have audiences seen you in lately? Are there any honors you’ve received that you want people to know about?

Paul: Most recently, I played Max in Sunset Boulevard at Reston Community Players for which the RCP audiences honored me with a Restie Award for Best Supporting Actor. Since moving to the DC metro area, I have also portrayed Javert in Les Miserables at KAT, Professor Callahan in Legally Blonde at MCP, and Mama Rose from Gypsy in my car and living room.

Jolene: The last show folks saw me in was Next to Normal as Diana, and the Rodgers and Hammerstein concert, both at RCP. I was honored to receive a Restie for Best Actress in Next to Normal.

Who are you playing in Shrek? What’s one way you really connect with your character?

Paul: I am so excited and honored to have the opportunity to play Shrek! I connect with Shrek in the same way I think a lot of people have over the years, in that he has body image issues and struggles with a feeling of being “less than” because he doesn’t look like the idealized version of what is “beautiful” and has to learn that beauty comes from within. Also, we are both very gassy.

Jolene: I’m playing Fiona, and I connect with her on so many levels it is hard to choose just one. She has an ideal and plan of how her life is supposed to be and a path that she believes it should follow, only to discover it really isn’t what she thought it would be like, and you know what, that’s okay.

What is the most challenging thing about playing your character?

Paul: Playing Shrek is much more challenging than people realize! There’s the accent, the comic timing delivery, the special makeup that covers my ears and makes hearing difficult… But the most challenging part is probably farting on cue.

Jolene: Trying to imagine what it would be like to be locked in a tower by herself for 8,423 days, and how she must have kept herself sane. Also, changing into an ogre 3 times and back again twice, quite quickly every time! Got to love the magic of theatre!

What makes Shrek special or unique?

Paul: It’s a movie turned into a stage musical? No, that’s not unique. Uhm, its main character is green and scares people? No, that’s been done too. Let’s see… I suppose Shrek is special because it is really funny, it has humor for all ages and it has a message not only about being yourself, but learning that if you can’t love yourself, how in the hell are you gonna love somebody else? Can I get an Amen?

Jolene: I think the message makes Shrek special: that everyone is unique in their own way and that makes someone special and wonderful. Also, life may not go as planned, but if you are open to the possibilities presented to you, you could end up having the most wonderful experiences.

What is your favorite number in Shrek  — and why? Do you have a favorite line you get to deliver? What is it and why is it your favorite?

Paul: My favorite musical number in Shrek is “Freak Flag” because it is hilarious, so much fun and the message is important. My favorite line to deliver is “You’ve never read a book like this, but fairy tales should really be updated,” because, well, I agree with the sentiment that there should be tales celebrating all different forms of beauty and love.

Jolene: My favorite number in Shrek is “I Think I Got You Beat” because who doesn’t love to be able to fart and burp in rhythm?  My favorite line is, “Well maybe you shouldn’t judge people before you get to know them.” It’s my favorite because Fiona is saying she has learned her lesson: if you judge people (or ogres) before you know them, you may miss out on your best friend or even the love of your life.

Is there a number you WISH you were singing in Shrek? What is it and why? Or is there a line or scene someone else has that you just wish was yours? If so, tell us what it is and what makes it special?

Paul: I don’t really wish I was doing anything more than I get the privilege to do, but there are some moments in this show that are very special! Our Farquaad, Chuck Dluhy, is amazing and has some of the funniest lines in the show! Our fairy tale creatures are funny and so talented. The ensemble is so hard working and has so much to do, including some big showstopping numbers! And my Fiona and Donkey, Jolene Vettesse and Joshua Redford, make every scene I get to do with them special because of their full commitment and generosity in sharing the stage!

Jolene: “Who I’d Be” — I love that song. I think it shows so much about Shrek and how he has let being an ogre limit his life, and I think everyone has asked themselves that question, right? What would I do if money wasn’t an issue, or my looks, or my weight, or being limited by what others think I’m good at? It is a great song.

Paul: A warm, fuzzy feeling of love and respect for others no matter how different they are!

Jolene:  That you should be open to all of the possibilities that life might throw at you!

What are some of the magical surprises that RCP’s production of Shrek has in store for audiences?

Paul:  There are so many!! Our director, Sue Pinkman, has such incredible vision for the show and knows RCP so well! Then there’s the incredible technical design – the sets, the costumes, the props, the lighting & sound effects, not to mention the brilliant musical direction of Elisa Rosman. It’s going to be a really special production not to be missed!

Jolene: So many surprises! The Dragon, the quick changes, the makeup, the wigs, all the technical aspects are just going to be amazing!

Shrek The Musical plays from October 16-November 7, 2015 at Restn Community Players performing at CenterStage at the Reston Community Center – 2310 Colts Neck Road, in Reston, VA. For tickets, call the box office at (703) 476-4500 x 3, or purchase them online.

CenterStage is handicap accessible and offers listening devices for the hearing impaired. 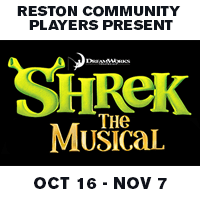 Shrek The Musical is produced by Laura Baughman and Mary Ann Hall and features direction by Sue Pinkman, musical direction by Elisa Rosman, and choreography by Ivan Davila and Haley North.