Singer’s Glen is a wonderful project which introduces many musical groups to local audiences in a comfortable and social environment. This is a non-profit venture initiated by Bruce Cohen, with the help of his friends and neighbors. It is one of a few ventures of this sort, known as a “house concert.” Usually there is a small donation expected, which goes to the musicians, and there is food and drink, often in a potluck format. An interview with Cohen follows, describing the mission and course of Singer’s Glen.

Francine: How long have you been having concerts and what are some of the artists/acts you have sponsored?

Bruce: I hosted my first house concert in 2009, without a clue as to how much satisfaction I was about to derive from that first concert and the countless concerts I’ve hosted since then. As luck would have it, Tim May and Brad Davis were two of the musicians who played at the first concert, renown in Nashville for their mastery of the acoustic guitar, banjo, and mandolin. Dan Miller, publisher of Flatpicking Guitar Magazine, accompanied them on bass for an over-the-top performance and release of their latest CD. Since then, I have had the honor to host concerts by Orrin Star, David Grier, Clay Hess, Scott Morgan, Dan Caton, Ken and Brad Koldner, Karen Jonas, Tim Bray, Ricky Simpkins, Avril Smith, Hiroya Tsukamoto and many other extraordinary musicians.

Do you screen the artists in some formal way? What is the genre of music you focus upon?

Whenever possible, I attend at least one performance by any musician I am considering. There are several venues in the Washington DC area that showcase performers, including the Annual Folk Festival at Glen Echo, Lucketts, Strathmore, and the Takoma Park Folk Festival. If I am unable to attend a live performance, occasionally I base my decision on YouTube videos of the musicians. Whereas the majority of the concerts I have hosted feature Bluegrass and variations thereof, I welcome Old Time and folk musicians as well.

What inspired you to do this? Was there a pivotal incident?

As a retired physics teacher, I intended to take up the guitar and use music as a “hook” to interest children in science, math, and engineering.  My plan was to go into 4th-grade classes with my guitar and familiar songs with new lyrics to posit questions for discussion. Meanwhile, I was renovating my family home and happened to mention to Dan Miller at a Bluegrass festival that my house in Maryland was empty but might serve as a venue for a concert. Without missing a beat, Dan said he Tim and Brad were working on a CD and that he’d like to release it in six months at my house. When I discovered how many talented musicians are looking for venues, I abandoned my aspirations to play the guitar and devoted my time and energy to hosting concerts and subsequently to the construction of an outdoor stage that is still in the works.

What is your musical background? Do you play an instrument or play in a band?

I read music notation but don’t have the “ear” that many others have.  Once I finish construction of the outdoor stage, I may pick up the guitar again  But I’m in awe of the musicians who have played in my home and pleased to continue providing the venue to enable them to share their talents with others.

You mentioned that community-building is one of your objectives.  Do you think that you have had an impact locally in some way?  How much of your audience comes repeatedly and do they have any connections with each other outside your events?

I enjoy the intimacy of a house concert, the pleasure of working with musicians, the music itself, and the gratitude of the audience.  But I also enjoy the satisfaction of knowing that I am not only helping to support the musicians but also providing an occasion for people to meet.  In every instance, I encourage everyone to bring a beverage or food to share. And often, I invite visual artist go exhibit paintings, sculpture, or crafts on the day of the concert — such that, when all is said and done, we’ve had a feast for both body and soul — which prompts folks to come back again and again and bring friends with them. 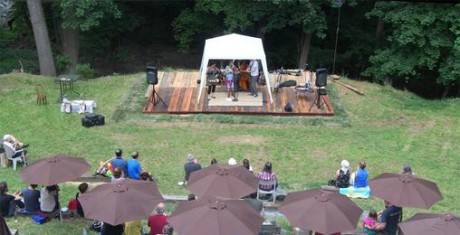 Did you get any help in designing or constructing your outside arena? How have you managed the acoustics?

For the first 2-3 years, all concerts were in my living room where I can seat an audience of approximately 60, depending on the number of musicians. My decision to start construction of an outdoor stage was prompted by requests from groups of musicians that were too large to accommodate inside. For a year, I considered my options but construction of the stage didn’t start until a large oak tree fell near my house, and I arranged to have it sawed into planks After allowing the planks to dry for 10 months, my sons and several neighbors helped me design and build a stage 14 feet x 24 feet, using the planks from the fallen oak, on top of which I am constructing a timber-frame structure to  provide shade for the musicians during the summer months. Whereas the acoustics inside don’t necessitate amplification, I ran electricity from my house to the stage to meet any power requirements imaginable and the results, judging by the first three outdoor concerts, have met or perhaps exceeded my expectations 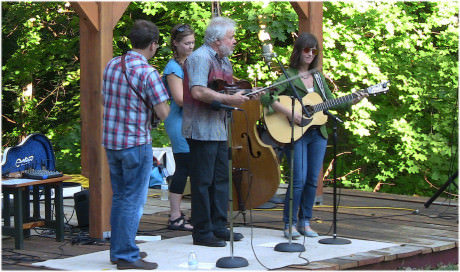 There is parking impact on the neighborhood of your events. Has this been an issue with the neighbors? How do they feel about your project?

Parking can be an issue, especially if the ground is soft because there is no on-street parking directly in front of my house. I am fortunate insofar as I have a large field which can accommodate 30-40 vehicles, but that is problematic if the ground is soft. In that case, I park 4×4 vehicles in the field and direct 2-wheel drive vehicles to a nearby street from which folks can walk via a foot path. Following the first outdoor concert in July, one neighbor asked if I could lower the volume which I did for the next concerts by re-positioning the speakers. Apart from that, I haven’t had any “pushback” from neighbors and have, in fact, seen several postings thanking me for my efforts.

What are your future plans?

This Sunday, on October 4th, I am hosting an event to enable friends and neighbors to meet Jamie Raskin, candidate for Congress from Maryland’s 8th congressional district. I believe Jamie Raskin is a worthy successor to Representative Chris Van Hollen (a candidate for the Senate) and encourage others to support his candidacy, regardless of where they reside.

We’ll get started at 1 pm with Chris Monaghan, playing a mix of original tunes and covers. Chris is only 17 years old but has already released a CD and performed three times at the Bluebird Cafe in Nashville. At 2 pm, our own Randy Barrett, Sally Truitt from Colorado, and friends will be playing a mix of Old Time and Bluegrass. Please bring a beverage or food to share. Further details are at Singers Glen.