In Part 1 of a series of interviews with the cast of 2nd Star Productions’ The Music Man, meet The Music Man himself-E. Lee Nicol.

Joel: Please introduce yourself and tell our readers where they may have seen you in the past year on local stages?

Lee: My name is E. Lee Nicol. I was most recently scene at 2nd’s Star in their production of Children of Eden as Adam/Noah. Around the area in other shows such as The Sound of Music, Legally Blonde, and The Music Man.

Why did you want to be part of The Music Man?

So I could be a part of the 2nd Star family again!

What does the show have to say to audiences of all ages?

Well, you have to be a little older to get all the subtle, but profound, transformations the whole town makes, but everyone will, or should, get the fun and the journey it takes to be a community.

Who do you play in the show and how do you relate to your character?

I play Harold Hill. I don’t “relate,” which is why it is such a fun challenge. I guess the closest thing to “relating” to the character is, who doesn’t want to make a quick buck, to get in and get out and move on the next fun thing…only to realize that along the way, maybe even at the end, you’ve changed for the better by the people you encounter, without even knowing it sometimes, until it’s happened.

Have you appeared in other productions of The Music Man before and who did you play and how is this production different and unique?

I have, with Charm City Players, also as Harold Hill. This show has a different quality level with a Broadway feel about it.

That I’m not in…Is there one?. I guess the scene with Marian and Mrs. Paroo. The ladies are wonderful, the songs are beautifully done, and I get to take a breath for a moment.

That I’m in… pretty much Act Two, Harold finally gets a chance to focus on one person and along the way realizes he has been touched and transformed. But above all, the scene with Marian, Winthrop, and Harold before Harold is arrested closer to the end. My favorite line in the show is: “I always think there’s a band kid.” Truer words, never spoken.

Which character in the show is most like you and why?

In an odd way, Marcellus. We learn that Marcellus used to also be in the fast-paced, con-man business, but now is content with settling down with a “nice comfortable girl.

When I was younger, not even NYC moved fast enough, but now, I’m a little more content to settle down with my family. 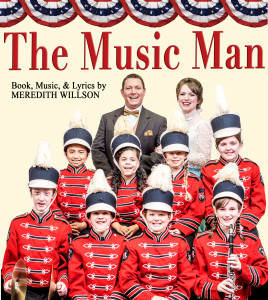 What do you admire most about your fellow castmates’ performances?

Their ability to just have fun! That’s a hard concept for me sometimes. But mostly, Emily Mudd (Marian Paroo)! What a delight to work with. So effortless. Probably the most perfect casting of a role. The downside to this honor of performing with her, is the energy it takes to match her.

How did you prepare for your role and what were the biggest challenges you faced, and how did you resolve them?

Well there’s not a lot of real singing which is important to me. “Trouble” was this HUGE, daunting, multi-page “spoken” song. I was petrified! I joke with people that it’s a song with 4,000 words and only 28 are repeated. But, it has become one of my favorites in the show…and it requires all the respect it deserves to perform it without mistake.

For this run, I didn’t really prepare other than to take a breath and keep moving forward. The biggest challenge was, and still is, to “UN-learn” the previous show and immediately replace muscle memory from before with all new direction and movement. Clearly knowing the lines and lyrics alone do not make a performance.

What was the best advice or suggestions your director Jane Wingard gave you about playing your character?

Why should audience goers bring their families to see The Music Man?

t’s a classic! It’s fun! There’s not a bad word in the show, and you’ll know and want to sing along with 90% of the songs.