Company, the Tony Award-winning Stephen Sondheim musical (book by George Furth), examines the pros and cons of being married vs.staying single, from a 35 year-old bachelor’s point of view, circa 1970. He is friends with “good and crazy people” who all live in New York City – well, married couples who harangue him about how he should settle down. And yet, as he looks at their relationships, he’s not completely sold on the value of a marriage – towards the end of the show he confronts one of the wives with, “What do you get?” The guy just may turn into a confirmed bachelor after all; he just needs to get comfortable with that identity.

Tantallon Community Players’ production of Company is thankfully cast with strong singers. Sondheim’s shows are often very challenging to sing – tempos, lyrics, layers of voices in counterpoint, rhythms –  but as a whole, this cast keeps up with the score’s demands. The orchestra also deserves a nod for not overpowering the performers. We could hear every lyric.

If you are a Sondheim and Company fan you will see a non-traditional cast lead by a group of mature actors. Company hinges on the fact that the protagonist, Bobby, is having a birthday, a rather significant one (in George Furth’s book-his 35th). Here Tantallon Community Players took it to a different level and cast regardless of age and race and had the talent of the cast tell the story of relationships; married, single, broken, or dating, and the high quality of the ensemble’s acting and singing did just that, they told the story. You may shake your head if you are a ‘Sondheimite’ – but you won’t deny that this cast sings the heck out of Sondheim’s score.

Bobby, (played by Christopher Gerken), is at his best with his bemused facial expressions in the encounters he has with friends and three women he is dating. Sometimes these husbands and wives quip one liners and Gerken enlarges the laugh with his non-verbal reactions, or a simple, “Wow!” His big, iconic song comes at the very end, “Being Alive.” His interpretation is heartfelt, yet it seems to drag a little… for the intensity of what it is communicating, a quicker tempo or one that built to it would have added more punch.

Other songs to note are “You Could Drive a Person Crazy,” sung by the three ladies Bobby is dating: April (Abbie Derosiers), Marta (AnnaBelle Lowe), and Kathy (Alexa Haines). They perform it with comical choreography and aptly convey the exasperation they feel. Then there’s “Another Hundred People,” in which Lowe takes full command of the stage on her own, and she is fun to watch, definitely a stand out in this cast.

Also in Act I, “Getting Married Today” is frantically sung by a near hysterical bride-to-be Amy (Valerie Holt) with very cold feet, Paul (Jason Ellis) the clueless groom, and Susan (Kathryn “Kitty” Harger) a church choir soloist, who only adds to Amy’s off the charts stress level. It is comical, but the spoken word scene afterwards gets down to the reality that she means it. Paul handles her news of “I just don’t love you enough” in a believable way, with the right amount of pause. It is a dramatic moment well-played.

Act II features,”What Would We Do Without You?” cleverly danced with bowler hats and canes. The program mentions no choreographer, but perhaps this was part of the “Musical Staging” that Director Hans Bachmann did so well. Regardless, hats off to the performers on this one. It featured a little tap dancing and was very enjoyable.

Other standout performances to note are the overbearing, food addict Sarah (Cheryl Bolt) who gets competitive with husband Harry (Ron Sweeney) through a series of karate demonstrations which increasingly make Bobby feel uncomfortable. It is that kind of awkward humor that when done right, like this, is hilarious. April (Abbie Derosiers), the single stewardess Bobby’s dating has some great moments in her bedroom scene with Bobby. Their morning after song “Barcelona”, on the surface level seems wistful, but the funny twist ending will make you laugh.

One of the most iconic songs of not only Company, but of Broadway itself, is the oh so cynical “The Ladies Who Lunch.” Performed here by Joanne (Charla Rowe) it seethes with hostility towards other women. Rowe is a powerful singer, drink in hand, and is in that generation of women “of a certain age” that can look back at other women with a cold eye. She takes center stage in a spotlight on this one, and as she sings out directly to the audience, I was yearning for her to take a few steps to the right and left here and there rather than stay completely stationery, but she does shine in this sarcastic role throughout the show.

The setting for all these conversations and songs Bobby has with his friends and love interests are seating areas on platforms, a nice balcony with a screen projection behind it, and a backdrop featuring colored panels. The screen projections of various, glamorous, high rise apartments in New York City, a view of the skyline at night, a park with a waterfall, and a few 1970s looking young women are perfect. They add much context to establish where the action takes place. Bobby’s bed, with its red satin sheets is cleverly tucked into the center stage sofa, and then rolled back into place. Unfortunately, the Set Designer’s name is missing from the production staff stated in the program, but someone should get credit for coming up with the set design that works so well

The show’s assortment of sound effects, credited to Harmony Hall Staff, includes the cacophony of city noises, birds chirping, footsteps and the unlocking of a door two different times. They worked fine, except when they were abruptly cut off instead of fading out.

“the complex relationships between [Bobby’s] married friends and the difficulty of sustaining a meaningful bond in a contemporary urban world, which really hasn’t changed since the 1970s, when this show was written.”

Today’s world includes computer dating, cell phones, a faster pace of living, especially in large cities which one could argue make it even more difficult to find your mate than 45 years ago. Yet Company‘s theme still stands the test of time to a large degree. Audience members may relate to different parts of the show, whether they have never married, have a spouse, or are divorced and single again.

All these perspectives are explored in this version of Tantallon Community Players’ Company, so spend some time in the company of these characters who convincingly convey the ups and downs of dating and marriage. It has something to say to all of us. 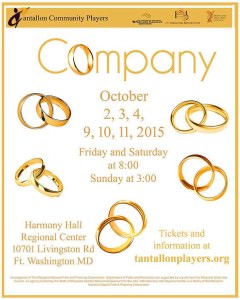 Company plays through October 11, 2015 at Tantallon Community Players performing at Harmony Hall Regional Center – 10701 Livingston Road, in Fort Washington, MD. For tickets, buy them at the door, or online.
RATING: