As the audience waits for the Washington Stage Guild’s Washington premiere of Michael Hollinger’s Tiny Island to begin, they look curiously at two humongous carbon-arc movie projectors posed stage left, lens gazing down like strange creatures from the future.

These monsters, the iconic remains of the cinema palaces that once drew crowds of film lovers to their luxury screens, now sit as monuments to a dead god, overcome as poly-cinemas abound.

And, indeed, Tiny Island offers its story of two aging sisters, each with a life more wasted than the other, like a parable to a god that no longer walks among us, a life that no longer resonates daily or otherwise.

Directed by Artistic Director Bill Largess, longtime company members Laura Giannarelli and Lynn Steinmetz take on the two sisters, Muriel and Hazel respectively, and they do so like two old friends.

In this opening selection in Stage Guild’s 30th season, I’m sure that the interplay between these two sisters will only grow deeper and fonder and more glistening with sparks as the run continues.

Pennsylvania native, Hollinger wrote Tiny Island early in his playwriting career and it shows its youth, even as its two sisters show world’s wear and tear. Life, particularly men, haven’t been kind to Muriel and Hazel. Tormented by a brutish father and disappointed by philandering husbands, they struggle to make sense of life after 50.

The older sister, a Bryn Mawr educated Hazel, played by a wise-cracking Ms. Steinmetz, couldn’t be more disappointed by her life in a projection booth in a movie theatre run by her onerous father. Her only joy comes in the form of Mike, the young usher who plays Trivial Pursuit with her as movies roll along. David Mavricos gives Mike a delightfully silly cheerfulness.

When Hazel’s estranged sister Muriel, played by a sympathetic Ms. Giannarelli, comes to visit, she wants nothing to do with family reunions. It seems that the two sisters once competed for the same young man and Muriel won.

Hollinger roots his play in a middle class variation of kitchen sink realism, but then employs flashbacks and hallucinations to jazz up the theatrics. The effects work more as a curiosity than as an illuminating element of the story.

Significantly, a young Muriel, played by the always dynamic Nora Achrati, appears with the young man Muriel eventually married, Norm (also played by Mr. Mavricos). In flashback, we witness the event that ultimately estranged the two sisters. Later, when they appear as Muriel’s hallucination we are certain that the younger sister is headed for a breakdown of some sort.

Fortunately, Hollinger’s play only toys with such issues, Muriel’s psychological unhinging turns out to be a false alarm.

To be sure, the script of Tiny Island leaves out too much of the story to be fully satisfying; its title, a name taken from a fictional classic film, Wings over Water, in which Amelia Earhart doesn’t die at sea but flies with her lover to a tiny island where she lives happily ever after in a secluded paradise, suggests far more than the script delivers.

Nevertheless, the production strikes many a tantalizing note, and Giannarelli and Steinmetz give us two older female characters reminiscent of an era when both the world, and the theatre, were seemingly more deeply rooted in what matters most.

That type of nostalgia, like the nostalgia for classic films, is what this production of Tiny Island does best. 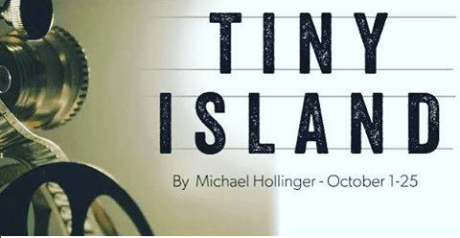