Mainstream classical music commentary in Washington often complains about an over-reliance on the symphonies and concertos of Tchaikovsky and Rachmaninoff for the programming at the area’s major orchestras.

But the American ear loves the Russian sound. That’s one of the ironies of the frequent geopolitical struggles between the two nations. If it’s really a problem that big Russian music carries the freight for the region’s musical establishment, maybe the issue isn’t the popularity of the Russian composers, it’s the lack of exploration of their total work. 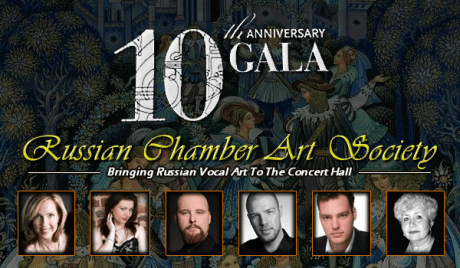 Problem solved: For that we have the Russian Chamber Art Society (RCAS), a unique institution not only here in Washington but possibly in all of America. The RCAS brings the amazing richness of the vocal music of the 19th century giant Tchaikovsky and the 20th century colossus (and Russian émigré to America) Sergei Rachmaninoff right to the capital city. The Society attracts top talent from a fascinating mix of Russian-born artists, other artists with roots in Slavic and Eastern European cultures, and native-born Americans who’ve made Russian vocal and chamber music their core repertoire.

All this was on display last Friday evening, October 2, 2015, as the RCAS celebrated its 10th anniversary with a gala concert at the Austrian Embassy. The embarrassment of musical riches started with Tchaikovsky and Rachmaninoff and moved onto such notable composers as Nikolai Rimsky-Korsakov, Modest Mussorgsky, Dmitri Shostakovich and others.

For me, three singers and one instrumental act stood out from the exceptional group of performers, although each of the 250 or more attendees in the festive crowd probably could name a different group and not be wrong at all.

I was first and foremost taken by the personally distinctive and attention-grabbing American baritone Timothy Mix as the closing act of the entire evening. Soon to appear in Albuquerque in Verdi’s Aida as the enemy king who is also the father of the heroine, Mr. Mix started with an arresting performance of an early Rachmaninoff song called “Oh Stay My Love, Forsake Me Not!”

His follow-up Tchaikovsky song, “On Golden Meadows Now,” has a strong tinge of emotional drama that goes beyond the vanilla-sounding title of the song in English translation, especially in Mr. Mix’s voice. That’s one of the reasons that hearing these songs in their original Russian is so meaningful. The Society handed out translations of everything, but the experience in the moment was best without consulting the translations, which served best as references later on.

Mr. Mix closed with a selection from a song cycle called Russia Cast Adrift by composer Georgy Sviridov, whose lifetime (1915-1998) almost exactly matched the period of the Soviet Union. The complexity of the Russian soul juxtaposed with its fate among nations is captured in this kind of music almost better than anywhere else.

Earlier in the evening, the crowd heard from a frequent visitor to the Washington area, as Atlanta-based mezzo-soprano Magdalena Wor sang three selections that matched her unique vocal timbre and dramatic skills. Rachmaninoff’s “The Fountain” painted the picture suggested by its title, with sung octaves and dynamic variations interplaying with waterfall-like arpeggios in the piano. A lovely ballad by composer Valery Gavrilin called “Forgive Me” was unmistakably tinged with Eastern European modalities, and Ms. Wor’s Polish-American identity – she grew up in a small town in southern Poland and moved to America at age 11 – absolutely informed the interpretation. It didn’t hurt that “Forgive Me” accesses Ms. Wor’s remarkably plush and wine-colored lower range as well as jumps to her relatively top range for a mezzo.

A Tchaikovsky song called “Delirious Nights” completed Ms. Wor’s set. She performs twice later this season with the National Philharmonic at The Music Center at Strathmore, first in February in Vivaldi’s Gloria and then in April for Haydn’s Lord Nelson Mass.

Russian bass Grigory Soloviov sang selections from Rachmaninoff and Mussorgsky. The most striking was a song called “No Prophet I” that showed off Mr. Soloviov’s gratifyingly even tone for a bass, lending the higher parts of this Rachmaninoff song a pleasing heft from his strong voice. “No Prophet I” has a quasi-religious, humble but positive and hopeful air. It’s significant that it dates from 1902, the year after Rachmaninoff’s major triumphs with his Piano Concerto No. 2 and his Sonata for Cello and Piano, both of which have – quite justifiably – figured in recent area performances and recordings by Washington-based artists.

The instrumental act of the night was an ultra-entertaining pair that was familiar to some of the audience but new to me: Tamara Volskaya on the “domra” (a type of lute) and Anatoly Trofimov on the “bayan” (an accordion with a few extra bells and whistles). Within their set was Rimsky-Korsakov’s Flight of the Bumblebee, but not as you’ve heard it before. Ms. Volskaya navigates tiny spaces between the plucked strings of her instrument and finger-runs along its neck to produce intricate (and in this case humorous) counter-lines, while Mr. Trofimov plays his accordion-like instrument less like an oom-pah machine and more like a virtuoso pianist. I’d tell you to hire these folks for your next wedding, retreat, festive wake, or bar mitzvah, but they’re going to steal the show from the guest(s) of honor, so beware!

Everyone who knows the Russian Chamber Art Society will immediately associate it with its founder, leader and champion – Vera Danchenko-Stern. She is an evangelist in the best sense of the term. Her personality overflows the performances right from the piano (where she accompanies everything that requires a pianist) and she’ll want to grab you by the arm whether you’re part of the show, someone in the diplomatic community, somebody from another musical circle, or best of all simply an audience member.

Several of the performers I talked to said they were there largely because of Ms. Danchenko-Stern, who not only promotes Russian chamber music and song, but digs in to help the artists make their best selections and perform at a peak level. The next RCAS event is a “Tribute to Shostakovich” on December 4, 2015, with some of the same performers returning, including Magdalena Wor.

The entire season is worth checking out here. There’s really nothing quite like it anywhere around. I bet the Society’s 20th anniversary celebration in 2025 will be quite an event as well.