Stephen Schwartz’ 1971 rock musical works best when it brings a “joyful noise.” Director David Gram and the cast and crew have done exactly that with this latest production.

Based on the Gospel of St. Matthew (and parables found in the Gospel of Luke), Godspell is a high-energy, rollicking celebration of love, joy, faith and community. The show hit Off-Broadway during the height of the counter-culture movement of the late 60s and early 70s, so one could expect a tie-dyed retro hippie-fest.

Scott Hengen’s overall scenic design and Camille Petrillo’s art work do nothing to discourage that perception. A color palette of orange, pink and white blend in a seamless replication of the best tie-dye patterns on the large cloth drapes and backdrops. As the audience enters the compact but comfortable theater, the house music plays a soundtrack of faith, joy and community from the 60s to recent hits, covering every conceivable genre. Go early, it’s a great way to decompress and forget the pressures of the world outside of the theater.

The show opens with a large white cloth dropping from the ceiling to the floor, and the audience is given its first view of the full set. Two large prop closets sit stage left and right, covered in show-themed graffiti. The most obvious and dominant structures are a large platform just right of center stage holding the band, and a three-story metal scaffold just left of center.

The production is the updated, 2012 version that played on Broadway. The opening number, “Prologue,” uses cell phones to highlight the Tower of Babel story. It’s very well done. To say this is a high-energy cast is to commit the worst form of understatement. The running, dancing, singing, climbing and clowning is all done in 5th gear, and by every member of the company.

A few numbers stand out and demand acknowledgement. The solo during “All Good Gifts,” performed almost flawlessly by ensemble member Edwin Santiago, is a show-stopper. Mr. Santiago’s range and vocal power give the song the lift it deserves, and coming just before intermission, sends the audience off with great anticipation for what’s to come in Act II.

In Act II, Samantha Shoop performs “By My Side” with such passion and emotion that you literally feel her connect with Jesus, her voice and expressions demonstrating her understanding of the power of that relationship.

Each member of the talented cast carries on with the joy and energy the show demands. Elizabeth Evans, in her first show at Montgomery College, is the perfect temptress in “Turn Back, O Man.” She slinks and slithers her way across the stage, eschewing the easy road of merely imitating Mae West. Elizabeth brings her own style to the role, and it definitely works.

A few thoughts about the lead characters, Zachary Norris (Jesus) and David Singleton (John the Baptist/Judas). Both men have the right mix of energy and talent necessary to bring their characters to life. Mr. Norris brings real patience and compassion to his role, you can easily see him as the Teacher during the parable scenes. David’s pain and anguish during the betrayal in “On the Willows” is palpable, and an excellent example of facial expression and body language.

There’s an old adage in theater. The best lines of dialogue and the best lyrics are left on the stage if the audience can’t hear them. Both Mr. Norris and Mr. Singleton could work a bit on diction, if only because they’re so good with their characters that the audience needs to be able to hear everything they say. It may be a matter of body mics and the sound system, so it’s likely an easy fix. And a fix that’s worth it, because these two guys are very, very good at what they do.

During the Lazarus parable, there’s a funny interaction with the powerful and wealthy character dressed in a shimmering robe and wearing a bad blond toupee. For the next several minutes, a series of Donald Trump jokes ensue. While a great attempt to bring current events into the production, after the third or fourth gag, it got a bit predictable. Credit Director Gram with knowing the perfect spots to introduce some current events, though. It happens a few other times, and works very well. 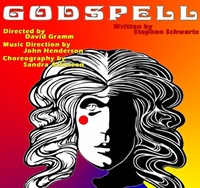 As we think about the future of live performance, we can take solace in the level of talent we see at our institutions of higher learning. No doubt the students in the Drama department at Montgomery College will have a major impact on stage in our region and beyond in the years to come, you can see that through their performances in this show.

Montgomery College’s entertaining Godspell is a wonderful retelling of a popular modern classic with a fantastic set design, great lighting, outstanding music played by a very good band, and a cast that fills the entire theater with talent, energy, humor and raw emotion in equal parts.