In Part 2 of a series of interviews with the director and cast of Prince William Little Theatre’s production of Julius Caesar – set in the Soviet Union during the August Coup of 1991 – meet Scott Olson (Julius Caesar), Matthew Scarborough (Antony), and Jay Tilley (Brutus).

Joel: Please introduce yourself and tell our readers where they may have seen you perform on our local stages. What shows and roles you have played?

Scott: I’m Scott Olson, I’ve performed recently as the Monster in Young Frankenstein, and I’ve directed shows like Shrek, Legally Blonde, and Nunsense. I’ve been doing theatre in all aspects in the region for the past 25 years.

Matthew: My name is Matthew Scarborough. I’ve been involved with a smattering of area productions. My previous roles with Prince William Little Theatre in particular include co-music director for The Who’s Tommy, music director for The Musical Of Musicals: The Musical! and Charles Condomine in Blithe Spirit, which was also directed by Mary-Anne Sullivan.

Jay: My name is Jay Tilley and I have been acting in the DC area theatre scene for over 16 years now. I’m guessing I’ve appeared in over 80 productions to this point, ranging from light operas and musicals to contemporary dramas and comedies to classical theatre, including Shakespeare. I’ve dabbled in some local TV, film and voice over work and have appeared at The Maryland Renaissance Festival as well. I currently appear in the web series Shotgun Mythos and occasionally stretch my improv legs with ComedySportz and The Blue Show in DC as well as with a troupe called The StageCoach Bandits. So, I guess you can say I stay pretty busy!

Have you performed in a Shakespearean production before and/or in Julius Caesar before?

Scott: This is my first spoken part in a Shakespeare production. I was in Richard III as a guard in the 80s. The next closest thing to that would be The Lion in Winter for The British Embassy Players in the 90s.

Matthew: This is my first time doing Shakespeare, and I can’t think of a better inaugural experience than the whimsical, lighthearted romp that is Julius Caesar. LOL!

Jay: I appeared as Brutus in Julius Caesar nearly a decade ago with a group called Vpstart Crow in Manassas, VA. With Vpstart Crow, I also appeared in Romeo and Juliet (Friar Laurence), Touchstone in As You Like It with the Reston Community Players, The Taming of the Shrew (Petruchio), The Merchant of Venice (Shylock) and The Merry Wives of Windsor (Falstaff). I’ve appeared in Hamlet twice – first as Polonius with Grain of Sand Theatre in an abridged version called Hamlet: Reframed for the Capital Fringe Festival and, second, as Guildenstern at The Maryland Renaissance Festival. I also appeared in Richard III (Buckingham) with Tapestry Theatre Company and in The Comedy of Errors (Jailer) at the Maryland Renaissance Festival.

Who do you play in this production and how do you relate and not relate to your character?

Scott: I play Julius Caesar. I definitely DO NOT relate to the character. His tremendous ego and god complex is incomprehensible to me. It’s been hard work to bring my acting to this level of ego.

Matthew: I play Marc Antony. We are alike in that I love plays and hear music as he does, but I do not share his military acumen/expertise or the overwhelming stamina/tenacity that he brings to the art of womanizing.

Jay: I have the pleasure of playing Brutus again. Brutus and I actually have a lot in common. We’re both loyal, dependable, thoughtful and generally well-liked. We both tend to brood over things and to be workaholics. We’re both passionate about things and we both have bad tempers at times! Probably the biggest difference between Brutus and I is that he tends to keep his emotions in check, while I tend to wear my heart on my sleeve. Plus, Brutus is former military and a politician. Although I’ve had many friends and family in politics and the military, I cannot personally relate to those occupations.

What is the play about from the point of view of your character?

Scott: He has ruled strongly for a long time and he’s solid in his belief that he should be the supreme ruler of everything. Yet he doesn’t trust anyone to be on his side, yet loves those who show loyalty to him.

Matthew: My character ultimately fantasizes about a second triumvirate consisting of himself, Caesar and an as-of-yet undetermined third wheel. When Caesar is assassinated (spoiler alert!), I snap and my goal becomes to avenge his murder and carry out his legacy myself.

Jay: Caesar is becoming far too powerful for the greater good. He must be stopped. He won’t step down and go quietly. Thus, he must die. There is no other way, but he must die in the most honorable way possible and he must be the only one who dies, otherwise the people will turn against him and his fellow conspirators and their just cause will be lost before it begins. Brutus doesn’t want to do this. He HATES to do this. And he wishes someone else could do it. But it has fallen on him because of fate or because he’s in the best position to pull it off or a little of both. Not that it matters, it’s his duty to his country, his people and his family, so it must be done.

How did you prepare for your role?

Scott: I read about him and watched some movies and certain political candidates that seem to be like him and learned I could do that. Thank God I’m not like that!

Matthew: Marcus Antonius was significant enough of a historical figure that we know a great deal about him, so most of my preparation was learning his timeline up until the events in the play as well as how it informed my relationships with each individual character in the show (as well as characters that do not appear in the show, such as his wife at the time). Most of this preparation was spurred on by Mary-Anne, who typically calls for a great deal of thought and consideration into each character before the actors even set foot onstage.

Jay: Having played Brutus before, I was already familiar with Shakespeare’s version as well as the historical Marcus Junius Brutus, but since that was 10 years ago, I definitely had to brush up on both. And this time, I was able to dig a little deeper into both. The new challenge was adapting what Shakespeare and history gives us and adjusting it to the 1991 Soviet Union setting. Mary-Anne was a huge help to me and the entire cast in that regard. She also really challenged us to examine our characters’ emotions, motivations, relationships and situations in every single moment of every scene. I think that will help us have a much deeper and richer retelling of Julius Caesar.

What lines and scene were the most difficult for you to perform and memorize and why?

Scott: In Act 2, there is a scene with Calpurnia that runs the gambit of emotions in less than 5 minutes. Fear, love, rage, loathing and total mistrust. It will wear a guy out!

Jay: Without a doubt, the scene where Brutus is informed that his wife Portia is dead. He receives word of her suicide while on the run and preparing for the final battle with forces led by Antony and Octavius. And Shakespeare only gives me a few lines to convey a wide range of emotions. It’s a difficult scene, but it’s probably my favorite because of the challenge and the ultimate emotional payoff for me and for the audience.

What does Julius Caesar have to say to modern audiences? What recent events parallel the events that occur in this play?

Scott: Treating people with respect is the only way to deal with people. You can’t just run over them like a freight train and not expect repercussions. I see the political climate in the world right now full of potential Caesars. I think the audience will see that not only can history repeat itself, but will continue until real change happens.

Matthew: I leave this one to my fellow cast and crew folks, who are more articulate about this kind of thing than I am.

Jay: Oh I think we see have seen Caesar-like leaders throughout history and I think we see them in today’s world. And I think we also see men and women who would do just about anything to undermine their leaders and the dangers of both. Julius Caesar teaches us that we have to listen to each other, work together and sometimes even compromise rather than take drastic measures for the greater good. Shakespeare’s classic is more relevant than ever before in my opinion.

How did your director help you to shape your performance and what were some of the challenges you faced and how did the director solve them for you?

Scott: Mary Anne has a background that runs deep into the motivations of humanity. She can bring out performances in you that you would never have thought possible because she understands what you need to become someone else of a type you would not normally be. It’s like being a comedian and being able to do hard core drama and nobody would have expected that the comedian could have done it.

Matthew: Mary-Anne helped shape my performance by having very clear ideas in her head from the get-go about Antony, allowing me to take my own stab at his characterization and then working with me to pinpoint an ideal place along the resulting spectrum.

Jay: Mary-Anne is a great director because she doesn’t let good enough be good enough. She challenges you to not settle for good when you can be great, to not settle for great when you can be excellent, to not settle for excellent when you can be phenomenal. She pushes you to focus on the little nuances, reactions, emotions, motivations and moments that can sometimes get lost in an epic play like Julius Caesar. And she’s very clear about what she wants, but she also is great about letting her actors play and have their own input. She’s always open to ideas and the entire creative process. Probably the biggest help to me personally was getting me to really focus on how Brutus’ physicality differs from my own.

Scott: I’m thinking of a drama, a musical and/or a comedy. With me you never know … until I’m cast that is! LOL!

Matthew: I will be involved in some way, shape or form in Prince William Little Theatre’s next two productions: Sherlock Holmes & The West End Horror (March 2016) and Cabaret (July 2016). In the future, I would love to reprise the role of Marc Antony in a production of Antony & Cleopatra, one of my favorite Shakespeare plays.

Jay: I will be reprising another favorite Shakespeare character of mine – Falstaff! I previously played Falstaff in The Merry Wives of Windsor and in January, I will be playing him again in Henry IV Part 1 with a group called Britches and Hose Theatre Company in Vienna, VA. 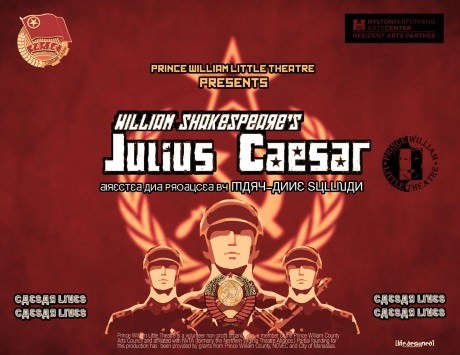 Julius Caesar plays from October 16 through October 25, 2015 at Prince William Little Theatre performing at the Gregory Family Theater at the Hylton Performing Arts Center on the George Mason University Campus – 10960 George Mason Circle, in  Manassas, VA. For tickets, purchase them online, or at the box office.