What happens when you realize that the person everyone thinks you are is not the person you really are, and the cost becomes too great to bear? When you’re young, to be sure, your future is, by definition, before you; its possibilities, at least in theory, limitless. In reality, they are to a great extent circumscribed not only by ability and opportunity, but by how others perceive and define you—which depends, to an extent we don’t often realize when we’re young, on how you perceive and define yourself.

As the play opens, a young woman (Stephanie Tomiko) sits alone in the darkness, her face partially illuminated, musing with hesitancy and uncertainty about a sexual game she and her best friend Luce used to play as teenagers, as if trying to pin down and parse out hidden meanings in something that once seemed incapable of holding any—but now seems, perilously, to hold little else. Cut to Addie (Stephanie Tomiko) and Bill (Dylan Hares), perched upon orange-mini-seated art-deco bar chairs against a tiny round table with a silvery, swirly stem. Behind them is a large video screen; throughout the play, it will offer silent, sometimes silly, sometimes commercial, sometimes Greek chorus-like subtextual commentary on the proceedings.

This vigorously sharp contrast, in every respect, to the previous scene is a skillfully managed jolt (from Stage Manager Kelsey Murphy). Bill wants Addie to marry him, but she’s unable to commit—or, when he presses, to articulate exactly why. Hares’ Bill is a guy who thinks he’s done everything right, and can’t figure out why one plus one don’t add up to two. Hares adeptly conveys Bill’s honest confusion, which grows into hurt and anger, escalating to accusation when he puts two and two together.

Addie, like Luce (Mo O’Rourke), hasn’t gone there yet; after all, they’ve been friends forever, Addie’s got a steady, and Luce is getting married to Nathan. Tomiko’s Addie is the opposite of Luce: cool, clear-headed and confident. Which makes her realization, when it finally comes, of what her heretofore unrecognized or at least unacknowledged feelings will mean for her and everyone in her life all the more shattering. When it happens, Tomiko seizes the moment, her eyes swimming; the pain screaming, but unspoken.

Luce, as bride-to-be, is in an even more untenable position. Making it unsurprising that when Addie tentatively raises the subject—choosing what could, just possibly, be either the worst possible time or, depending on the answer, the best—she evades it. As Nathan, Sam Taylor captures the youthful innocence and nervously hopeful, half-smiling unsureness of a twenty-something on his way to the altar. The wedding night will change all that.  As both Addie and Luce will take steps, intentional or inevitable, to change their lives—or find them unavoidably, irrevocably changed.

As Joan and Heather, Alison Talvacchio and Megan Konyndyk are pitch-perfect, with Talvacchio’s Joan the warm and understanding, knowledgeable and insightful friend we all want to have (and be). And Konyndyk’s Heather, on the other hand, tries to both subtly convey and (supposedly, but none too successfully) conceal the resentment of a long-married, much-harried, currently-carrying wife and mother of many.

Director Melissa Robinson has worked with the actors to draw a thought-provoking and at times searing portrait of what could result from, per Playwright Julia Starr, “coming out to yourself – being honest enough about your identity to even consider sharing it with the world.” Highwood’s mini-stage is used to maximum impact by the Your Theatre production team, from the large video screen at stage right that offers silent commentary on the proceedings, to the intuitive lighting design, by Toly Yarup, that articulates space, place, and mood. The furnishings are few but artfully conceived, complemented in the living-room scenes by the peach and mint ice-cream-colored walls and door by Set Designer Phoenix Ganz-Ratzat. The music, supplied by Sound Designer Orion Stekoll, is unobtrusive, but appropriately breezy in the bar setting.

The sophistication and sensitivity of the subject matter, and the highly effective way it is dealt with by Starr and Robinson and taken on by the young cast and crew, make The Long Way Around a vibrant solo among The Women’s Voices Theater Festival, and further testament to the continuing, and promising future, vitality of DC theater, and women playwrights’ place in it. 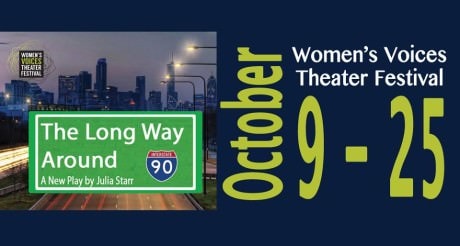