To date I have been to 20 productions and one staged reading that are officially in DC’s Women’s Voices Theater Festival (11 of which I have written about for DCMetroTheaterArts), and I am booked to see 7 more.

Yeah, I’m kinda on a marathon.

Monday night, as it happens, I attended a staged reading at Anacostia Playhouse of a new play called Absolom. And I thought to myself after: Wow, this play belongs in the next Women’s Voices Theater Festival. It was written by Dane Figueroa Edidi and presented as part of Theater Alliance’s Hothouse Reading Series. And it blew me away. 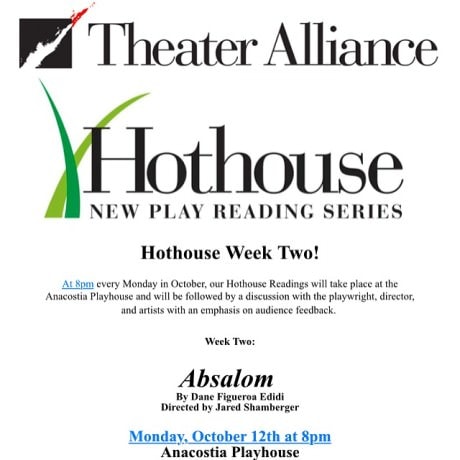 Absolom jumps off from the Biblical story of Absolom, who, when his sister Tamar was raped, killed her rapist. What Edidi has done with that core narrative is reimagine/reconceive it as a profoundly pro-woman epic. The plot is almost Shakespearean in its sweep. And the playwright has given her characters voice in some of the most powerful and moving poetry I can recall hearing in a contemporary drama.

And here’s the kicker:

When I think about Absolom alongside all the other new plays by women I’ve seen in this amazing festival, it would rank at the very top of my list in terms of being unabashedly feminist in its explicit opposition to misogyny.

Admission is free but reservations are recommended and may be made online.