Donald L. Coburn was born in 1938 in Baltimore to parents who were divorced two years later. His early life was unexceptional; he graduated from high school in 1957, then served in the U.S. Navy until 1960. He married twice, had his own advertising agency until 1968, moved to Dallas for a job with an advertising agency, and continued his business career as a marketing consultant from 1973 to 1975. And then a strange thing happened. He wrote a play, called it The Gin Game, and lived through the most unlikely two years in which he mounted it at the tiny American Theatre Arts in Hollywood. There it was seen by someone who brought it to the attention of Jessica Tandy and Hume Cronyn, who sent it to Mike Nichols as potential director of a production in which they planned to appear.

It was Mr. Coburn’s first play, it was the ATA’s first production, it opened on Broadway to rave reviews and piled up 516 performances, then played a sold out national tour with the two original stars. In 1978 it won the Pulitzer Prize, then had a triumphant run in England and the former Soviet Union. In subsequent years it has had major productions in virtually every country in the western world, including those in China and Japan.

I give you this incredible history of the play, because according to statistics, none of the above should have happened. The play itself could not be simpler in concept. A man and a woman are reluctantly living in a second rate home for the aged; they meet on the back porch of the establishment, find enough in common to start a conversation, and eventually join hands to play a few rounds of gin rummy just to pass the time. Over the next days, they meet several times, and the woman (Fonsia Dorsey) seems blessed with good luck, for she wins every hand they play. The man (Weller Martin) becomes more and more exasperated each time he hears the lady call out “Gin!”.  There are references to the other guests (or inmates if you prefer) but they remain offstage, at one point just behind the closed glass door that leads to the public rooms, where they are having a dance lesson.

Mr. Coburn’s dialog is precise, eloquent, revealing and through it we come to know much of the back story of these two frustrated  human beings. And we come to enjoy their company, to love  their originality, their fierce commitment to living with dignity as long as they can. They delight each other, they give each other an interest outside themselves for both have family ties that are badly broken. They also hurt each other and that’s what makes this play so compelling. It offers us two vivid characters with whom we identify and for whom we feel great empathy.

The writing is exemplary, but the cast of two elevates it into the realm of poetry. James Earl Jones and Cicely Tyson give new meaning to the words “endearing,” “enlightening,” “memorable” and a host of other complimentary adjectives. Jones is at the top of his considerable form as a fiercely independent control freak whose competitive nature is given an outlet only through the card game to which he is virtually addicted. Ms. Tyson has, as she did recently in The Trip to Bountiful, once again found the key to a character who is running out of weapons with which to fight her  misfortunes. She is a woman with a past that has robbed her of virtually everything she prized. She is positively luminous and reminded me of Laurette Taylor as Amanda in The Glass Menagerie, a performance I saw and cherish to this day. Not since Ms. Tyson won the Tony for Bountiful have I been so mesmerized by an actress. At 90, she remains firmly in control, and should be required study for every neophyte hoping for a life on the stage.

Set and Costume Designer Riccardo Hernandez, along with the lighting and sound creators have placed these people on a porch that reeks of age and infirmity. I can’t remember a sound design that delivered such clarity without distortion. A rain storm even adds to the reality of the place. Leonard Foglia as director  has guided all these gifted artists through this two-hander, with the result that we leave the theatre enriched and fully satisfied. More than satisfied, aglow. Mr. Coburn went on to write eight other plays and several television pilots in recent years, but The Gin Game is his passport to immortality. It’s scheduled to run into January, so I highly recommend you plan to visit this home for the aged soon. It will add years to your life. 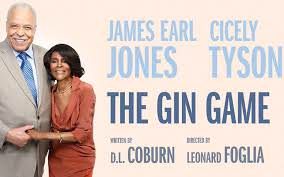