Zombie Prom, with Music by Dana P. Rowe, and Book and Lyrics by John Dempsey, currently stalking the underground stage of Spotlighters in Baltimore, is a howl that combines teen hormones, comedy, great music, hysterical lyrics, an amazing cast, and buckets of nuclear waste to create an explosively funny show. 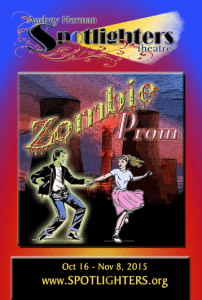 Expertly directed and choreographed by Kristen Cooley, the production has the ticket holders’ funny bones in its crosshairs It’s an atomic fusion of Grease with Walking Dead.

There were so much laughter from the seats – a laugh riot – it sounded like a second chorus.

For this show, the audience is transported into the Eisenhower years, the 1950s. A past that includes the music of Ritchie Valens, Elvis, Chuck Berry, and Buddy Holly as a pre-show warm-up.

The walls of the Spotlighters’ black box theater are plastered with Fallout Shelter signs and leaflets inviting students to seminars on the benefits of nuclear energy. A large banner welcomes all to Enrico Fermi High School, a snarky reference to the Nobel Prize winning creator of the world’s first nuclear reactor. Or, as it is announced: “The beloved father of the nuclear bomb!”

Alan Zemla, aided by Fuzz Roak, has designed The Spotlighters’ 10” x 10” stage to resemble a basketball court. Only at the center of the hand-painted faux wood court is a disc emblazed with a graphic of an atom. The disc looks benign. Yet, under certain lights, it takes on a menacing glow. The stage’s four permanent columns are decorated, this time, to resemble the chunky brick walls of yesteryear’s high schools. Later in the show, they do double duty as prom décor. Off to one side is a bank of lockers. A silhouette of a nuclear reactor can be seen on the opposite side.

A pocket on a third side holds the 4-person band with Musical Director Michael Tan on keyboard, Christine MacDonald on guitar, bassist Greg Bell, and percussionist Michael Feathers. Somehow, playing nearly nonstop throughout the show, they manage to sound like an entire orchestra.

The band set the mood with spooky music before doing a bloody good job with the prologue.

During the opening song, “Enrico Fermi High,” the audience was quickly introduced to heroine Toffee (Allison Comotto), the villainous, unprincipled principal, Miss Deilah Strict (Kristen Zwobot – who is anything but robotic), and several classmates.

The girls, strangely, all have sweet treat names like Coco, Candy, Ginger, and Honey. They enter, twirling in their pastel circle skirts, created by Costumers Robyn Claire, Kristen Cooley, and Fuzz Roark, fluffed up with tulle petticoats.

Jonny Warner (Alex Cecchetti) is the new kid at school, an orphan who transferred from another school. Sporting a leather jacket with “Jonny” emblazoned across the back, he struts a bit like Danny Zuko or Jim Stark – James Dean’s “Rebel.” His voice is a showstopper.

During an air raid “duck and cover” drill, he meets and quickly, passionately falls in love with exuberant, bubbly Toffee. She returns his affection. Jonny states she is “the only person who ever loved me.” He presents her with his beloved leather jacket.

Jonny’s also caught the eye of Miss Strict, who takes an instant dislike to him. She is incensed that he’s ruined a “biblical” name by removing the “h”. Miss Strict decides he’s a bad boy. She, along with Toffee’s parents, ostracizes him and forbids Toffee from seeing him.

The two almost-lovers express their anguish in “The C Word.”

Miss Strict demands adherence to her increasingly harsh, ridiculous rules. With or without her bullhorn, she is a bully – and she possesses a bully good, almost operatic, voice to back up her threats in “Rules, Regulations and Respect.” 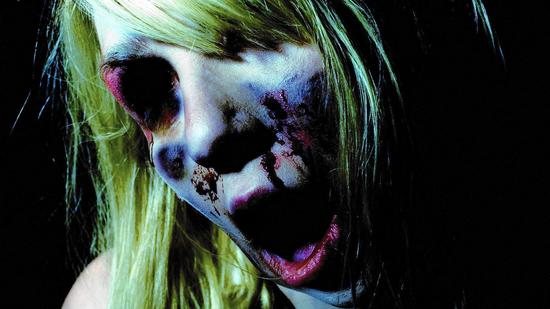 Above photo by J.M. Giordano

When Toffee returns the leather jacket to Jonny and breaks up with him, he is devastated. Tearfully, Jonny runs to the nuclear power plant and hurls himself to his death in its nuclear waste treatment facility.

A reporter for Exposé, Eddie Flagrante (Mark Lloyd) gets a tip from Josh (Derek Anderson) about the suicide. He’s busy fielding phone calls with tips he considers inconsequential.

“Nixon? Vice President Nixon,” Eddie yells in disbelief at one caller. “That man’s character is unimpeachable.”

To another he roars: “Joan Crawford beats her kids? That woman’s a SAINT!”

By the time Eddie begins sniffing out the story, Jonny has been buried far out at sea in a lead-lined coffin.

Toffee however, is spooked. She keeps hearing Jonny’s voice. She reveals she loves him.

But, you can’t keep a musical’s male lead down: Jonny’s ba-a-a-ack before Act I ends.

Albeit glowing, with strange irises, and blood oozing from his cheek.

He presents himself first to Toffee in their duet, “The Voice in the Ocean.” Jonny tells Toffee he decided to return from the dead when he heard her voice.

Not only is Jonny alive – he’s lively and wants to return to high school to graduate and take Toffee to the prom.

Will he get to go to the prom? Will he go with Toffee? Will there be a prom?

Promenade over to Spotlighters and find out.

Zombie Prom plays through November 8, 2015 at the Audrey Herman Spotlighters Theatre – 817 Saint Paul Street, in Baltimore, MD. Tickets can be purchased at the box office or online.

Also, The Thursday, October 22nd performance is “Ten Spot Thursday.” Immediately after the Sunday, November 1st performance there will be a “Talk Back” with the director and cast.