Our historic production highlights attention to detail for each character, expresses a tenacious attitude for following your dreams, and bridges a budding love for the arts. Chocolate Covered Rocky Horror, is a salacious, sexy  comedy, guaranteed to leave the audience wanting more!

EarlOrrin Productions, have developed a cast of extraordinary talented African- Americans who have taken this tradition to the next level, by honing on their own specific talents to make the characters come to life. Loaded with nodes to the African-American experience in America, our show will support Us Helping Us, People into Living, Inc., a HIV/AIDS health advocacy non-profit organization based in Washington, D.C. EarlOrrin Productions strongly believes in raising awareness for the African-American community, by addressing historical, social, and economic factors. Finishing out the year, we would like to highlight the services of Us Helping Us, People into Living, Inc.

In addition, as citizens of a country plagued with taboo stereotypes and unconscious ignorance of the LGBTQA community, we are enthusiastic to address HIV/AIDS awareness for the welfare of our audience, community, and country!

Doors open Friday, October, 30th at 9 PM for an hour reception featuring the infamous DJ NATIVESUN followed by the show and after party until 2 AM. Guests are encouraged to come dressed in festive Halloween costumes as we encourage guest to participate in our costume contest. 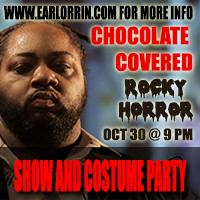 Please come out and support Us Helping US, People into Living, Inc., and EarlOrrin Productions, help raise awareness for HIV/AIDS research and the arts and humanities with a historic performance of, “Chocolate Covered Rocky Horror!” Purchase your tickets here.

By Earl Melvin and Michael Harris.