Sex sells, and this certainly true of Quintessence’s The Mandrake. Their 6th season starting off a “Love and Lust” theme, The Mandrake certainly fulfills the quota for lust, and then some. Originally written by Niccolo Machiavelli in 14th Century Italy, Quintessence has chosen a 1977 English translation by Wallace Shawn, in which the update has lost none of the original humor.

No stranger to the Quintessence stage, Director Alexander Burns leads this play to comedic success with piles of gusto and panache. Burns creates a nonsensical world that Machiavelli himself would appreciate, filling this show to the brim with wordplay and sexual allusions that leave nothing to the imagination and keep you laughing for hours. The ability to please every funny bone in the audience is no easy feat especially with a classical piece, and Burns does this with ease. Specifically, the use of song (compositions by David Cope) and dance (choreography by Janet Pilla Marini) used direct address properly but still comically sporadically the show, using this classical theatrical device properly for a modern audience.

Burns has put together the perfect ensemble to fill out these archetypal comedic roles. Introducing to the play, Jafeer Terrell opens with the prologue with charismatic Ben Vereen-like flair that sets up the language for the rest of the play. Alan Brinks plays the sex-stricken philanderer Calimaco, and his phallic references are constant and always hilarious. Calimaco gets all his help from the smarmy Ligurio, embodied completely by Josh Carpenter. Carpenter’s idiosyncratic movement and eccentricities of this disgusting and hilariously manipulative character are unique and so specific, carried perfectly throughout.

The idiotic husband and target of Ligurio’s scheme Nicia (Gregory Isaac) literally thrusted so hard he unbuttoned his shirt; his vulgar movements and foolish naïveté create make you laugh out loud every time he’s onstage. The immoral clergyman Brother Timothy slays the audience with his asides, specifically calling out his and all others’ corruptibility within the plot.

With a design team consisting most of the same as their rep production of Romeo and Juliet, the tech is simple and reminiscent of the days when this show was originally produced without tech. Utilizing the stone arches remaining from the old movie theater that once occupied this building, the set is essentially nonexistent to leave all of the room for the play. David Sexton’s lighting design highlights and generally washes as needed. The ability to simplistically isolate actors during asides and sidebars help clarify the action happening before us. Costumes by Jane Casanave set the story in the 14th century with very beautiful and accurate pieces.

The Mandrake is a humorous theatrical home run. 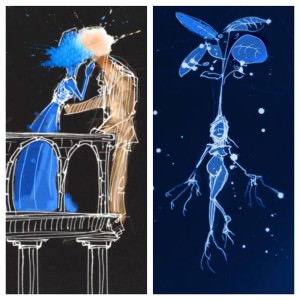 The Mandrake runs in rep with Romeo and Juliet through November 8, 2015 at Quintessence Theatre Group – 7137 Germantown Avenue (Mt. Airy), Philadelphia, PA. Tickets can be purchased by calling the box office at (215) 987-4450, or online.

Note: Note that the entire plot of this show is about sex and deception, including a few nefarious references.