In Part 1 of a series of interviews with the cast of The Most Happy Fella, meet Mackenzie Newbury who plays Cleo in their upcoming production which plays this weekend October 23-25, 2015. 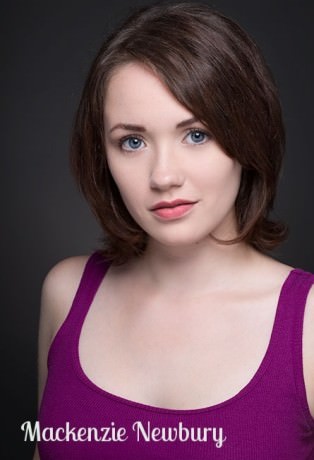 Joel: Introduce yourself to our readers and tell them where they may have seen you perform on the stage or in other local venues.

Hi! I’m Mackenzie Newbury and I’m a senior at CUA. I was in the mainstage productions the past two years, Carousel and Sweet Charity and was most recently seen as Dream Clarice in Studio Theatre’s production of Silence! The Musical.

Why did you want to be in The Most Happy Fella  at CUA? What did you sing at your audition?

I wasn’t very familiar with the show originally, but I knew a few songs. I love old musicals and enjoyed portions of the score that I had heard but it wasn’t until I read the script that I knew I wanted to be a part of this production. Honestly, my favorite part of it is that it is a beautiful musical in that classic old Broadway style but it centers around such strong women. That’s what really sets it apart for me. Though the traditional ingenues have their moments, the three women of this show, Cleo, Marie and Rosabella, all make their own choices and are not even slightly subservient to the men in their lives. They call the shots, they make the first moves and yet they enter into these romantic relationships that complete them and support them as strong individuals.

I sang “I Cain’t Say No” from Oklahoma! for my audition.

Who do you play in The Most Happy Fella and how do you relate to him or her? What do you admire about your character and what do you not admire?

I play Cleo who I relate to in a lot of ways. As I said before, she’s a strong woman. She is a presence. She is loud, says what she feels and goes after the things she wants. I have a lot of respect for that and it’s how I try to live my own life. At the same time she is compassionate and loyal, especially to Rosabella, and even finds a softer, sentimental, more romantic side that she embraces after her initial hesitation wears off. She eventually learns to stop being so cynical and get a little romantic. She is feisty too, and not always in the best way. She struggles to see the good in people and gets in fights, so I’d definitely say that she should work on that. Maybe Herman can help!

Which character that you are not playing is most like you and how and why?

I’m honestly Cleo through and through but if I had to pick another I’d say Rosabella. She is determined to get the things that she wants and stands up for herself. She’s independent and self-sufficient and will do what she needs to in order to make her dreams a reality. Plus, I think “wanting to be wanted, needing to be needed” resonates with everyone and that song, “Somebody Somewhere” is some of the most honest writing in musical theatre.

How would you describe the score that Frank Loesser has written for this show?

I’m sorry- my castmates and some of the Production Team may disagree but to me this is an opera! Or at the very least, incredibly operatic. We are all earning our Bachelors of Music here and have a lot of exposure to difficult music, but this was quite the challenge for a lot of us.

What is your favorite song that you are not performing and why?

“Please Let Me Tell You.” I can’t say too much about it without giving away a major plot point, but it is gorgeous. There are grand moments from the orchestra interspersed with almost recitative-type passaged sung by Rosabella and it is so expressive.

What have been the challenges you have encountered while preparing for your role and how were those challenges overcome?

Being bigger. One way that I differ from Cleo is that I’m a little more physically reserved but she throws her heart and soul and sass into everything she does so I had issues loosening up in the beginning, physically. I got used to it through time and rehearsal and several reminders from Pauline while we were working through the beginning of “Big D.” I’ve always kind of been “the dancer” in life, so working through the songs and the movement to find the character just kind of makes sense to me and helps me to make bolder physical choices.

Pauline’s choreography is grounded, I would say. She focuses more on beatwork than any choreographer I have ever worked with and it ensures that all the movement is genuine and motivated. We build from a strong sense of community, with a core group of dancers and join in when the natural impulse is to join in from the infectious energy of the ensemble. I’m biased, but my favorite number is “Big D.” The energy level is so high and it is so much fun. It’s also stylistically very different from the rest of the show and the moment when my character is really embraced by this community.

What is your solo in the show and what do we learn about your character when you sing it?

My only solo in the show is “Ooh My Feet.” I also sing a few duets with Rosabella, a duet with Marie, and a beautiful trio with Marie and Tony in addition to a few duets with Herman including “Big D.” While “Ooh My Feet” sets the scene for the show, clueing the audience in on the fact that these women are waitresses living a rather dull, hard life that has made them numb, I’d say that it’s some of the other pieces that tell more about Cleo.

“Big D” explains about where she came from. “I Don’t Like This Dame” shows that she often speaks before she thinks and that she isn’t used to keeping her opinion to herself. The duets with Rosabella show her loyalty to her friendship and her sassy side, a lot of the times. She always has a quick response. However, I think it’s “I Like Everybody Reprise” which for me is the turning point for her and reveals the most — it reveals that softer side. It’s her “oh no, I’m in love” moment and she spirals through a few more emotions before that realization really hits. It’s where you see her guard break down and she starts to think about what she really wants.

What does The Most Happy Fella have to say today’s theatergoer and what themes from the show are still relevant today?

There is an interview on Broadway.com with Laura Benanti who played Rosabella in the recent “Encores” production where she says, “It is not necessarily happy like a kickline, but the way grown-ups are happy, like ‘I’ve suffered some stuff, and I’ve gotten through it, and I’m wiser and now I’m grateful’” and that’s what I always refer to when people ask me about this show. It is so elegant and beautiful but there is a real maturity to this piece. It is about very realistic characters dealing with very realistic emotions and problems that are incredibly timeless.

What have you learned about yourself – the actor and singer- during this whole process?

I’ve learned to trust my technique. This whole production has been a kind of “vocal bootcamp” and I’ve become very aware of checking in to make sure that I’m doing everything technically correct. Because it’s such a massive undertaking, I’ve been forced to take better care of myself as well- more sleep, more steam, less nights out. As an actor working with the scenes that bounce between recitative, dialogue and fully sung phrases has been an amazing exercise that has really helped me to improve my ability in acting while singing.

Why do you think The Most Happy Fella is a ‘hidden treasure’ of musical theater history and why should more theater companies mount productions of it.

It walks the line between musical theatre and opera more-so than any other production that I can think of. That alone earns it a spot in the history books!

What advice would you give another actor who is preparing to play your role in another production of The Most Happy Fella?

Create your own character. There are so many different ways that these characters can be played and even Cleo. She is a bit larger than life and incredibly sassy and brassy, but I also attempted to find a bit of the “Southern Belle” side of her as well. I keep joking that my take is a combination of “Ado Annie” of Oklahoma and “Lois” in Kiss Me Kate. Make your own interpretation!

What do you want audiences to take with them after seeing The Most Happy Fella and your performance?

I just honestly want their heart to be “so full” of this show.

The Most Happy Fella plays from October 23-25, 2015 at the Catholic University of America’s Hartke Theatre – 3801 Harewood Road, NE, in Washington, DC. For tickets, purchase them at the box office or online.

LINK:
‘The Most Happy Fella’ Plays This Friday through Sunday 10/23-25 at Catholic University’s Hartke Theatre.