With book and lyrics by Frank Loesser, The Most Happy Fella is known for a lush score, powerful vocals, and extensive dance sequences in songs like “Standing on the Corner,” “Somebody Somewhere,” and “Big D.” Audiences will be swept away by a tale of comedy and romance this month as the Musical Theatre Division of the Benjamin T. Rome School of Music presents its fall production, The Most Happy Fella.

Set in Napa Valley in 1927, The Most Happy Fella tells the story of a May-December romance between Tony, an aging Italian vintner, and Rosabella, a young and beautiful waitress from San Francisco.

The show opened at the Imperial Theatre on Broadway in 1956 and had an original run of 676 performances. The production has been said to be a combination of Broadway and opera, but Loesser described it as “a musical comedy — with a lotta music.”

“I like to equate it to Stephen Sondheim’s quote when asked about Sweeney Todd,” said N. Thomas Pedersen, head of the Musical Theater Division and conductor. “Sondheim said, ‘When it plays in an opera house, it’s an opera; and when it plays in a theater, it’s a musical.’”

Though Loesser called The Most Happy Fella “a very simple love story,” director Matt Basset believes the musical actually depicts “the complexity and depth of feeling present in any melodrama, opera or otherwise.”

“The joy in exploring this piece for me has been in celebrating the large, pure emotions in the group scenes — we tell our actors often that these are people who, in large groups, feel everything big — and the complexity in the more intimate scenes — solos and duets express a character’s arguments and desires like soloists,” Basset said. “Far from ‘simple,’ I would call it ‘elegant.’”

The choreographer for the production is CUA Dance Coordinator Pauline Grossman and costumes are by Eleanor Dicks. The musical’s cast of actors will be accompanied by the 35-piece CUA Symphony Orchestra.

The main character, Tony, will be played by baritone Gustavo Ahualli, a member of the CUA voice faculty. Originally from Argentina, Ahualli has performed leading roles in standard operatic repertoire and contemporary works all over the world. He has been praised for his “full, rich, and powerful” baritone.

“This is an excellent opportunity for our students,” Pedersen said. “Musical theatre students get to work with a world-class baritone and they get to learn from him while he learns from them.

“I know audiences will love hearing this score in our intimate 600-seat Hartke Theatre with Don Walker’s original orchestrations played by members of the CUA Symphony Orchestra,” Pedersen added. 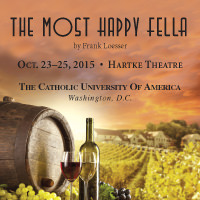 Tickets are $40 for premium seating; $25 for general admission; $15 for seniors and CUA alumni, faculty, and staff; and $5 for students and children under 8. Purchase tickets at the box office or online.