Nobody can seethe like Jenna Kuerzi. As Katherina in The Taming of the Shrew, Kuerzi reacts to every slight from her unwelcome suitor Petruchio with rage. Her nostrils flare. Her eyes bulge. Her tongue bounces around in her mouth, straining against her cheeks. Her voice erupts into a piercing bellow that belies her petite frame. Her unruly hair even seems to grow a few more inches.

Okay, maybe I just imagined that last part. But I wouldn’t put it past her. Director Carmen Khan’s take on Shakespeare’s controversial comedy is excellent in nearly every respect, but it’s Khan’s vision of Katherina (a.k.a. Kate) as a surly punk princess in a Brooks Brothers world, aggravated by the attitudes and the attire of all and sundry, that makes this Taming of the Shrew special.

Kuerzi is well-matched by Aaron Kirkpatrick’s jovial, affable Petruchio, who seems to view his pursuit of the brooding Kate as an amusing pastime. In this version Petruchio and Kate come off not as mortal enemies in the battle of the sexes but as players in a game – and the turning point is when Kate learns, like Petruchio, to not take the game so seriously. Slowly but surely he wins her over, and their shocked and delighted expressions say it all. In the final scene, when Kuerzi gives that speech that has stymied scholars for centuries – the one about what “a woman oweth to her husband” – she recites it with a wry smile and bursts of laughter. But it’s at the end, when Petruchio responds to her speech by saying “Come, Kate, we’ll to bed,” that she gives her biggest cackle. Has he really tamed her? Don’t bet on it.

But not all of Khan’s choices work. While Alexander Eltzroth has a good way with a punchline and a pratfall as Petruchio’s loyal servant Biondello, dressing up the remaining servants (Zach Aguilar and Sarah Stryker) in clownish cross-dressing garb falls flat. And although Josh Kachnycz and William LeDent are good as Lucentio and his servant Tranio, the sequence where they disguise themselves in each others’ costumes damages the show’s clarity. While it starts out wittily – with Tranio saying “In brief, sir…” as they both strip down to their briefs – the next time the actors appear, they are dressed differently. Because the previous scene had put such an emphasis on how they were clothed, I spent several scenes thinking that the actors were playing different characters after their clothing changed.

There’s good diction from all the actors, and the text shows minimal signs of cutting (the play-within-a-play prologue is missing, but that’s no big loss). Michael Cozenza contributes the rousing fight choreography, and Bethanie Wampol’s spare but effective sets don’t get in the way of the words or the actors. 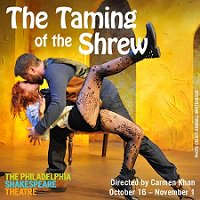 The Taming of the Shrew plays through November 1, 2015 at The Philadelphia Shakespeare Theatre, 2111 Sansom Street, Philadelphia, PA. For tickets, call the box office at (215) 496-8001, or purchase them online.