In Part 4 of a series of interviews with the cast of Catholic University’s The Most Happy Fella, meet Harrison Smith. 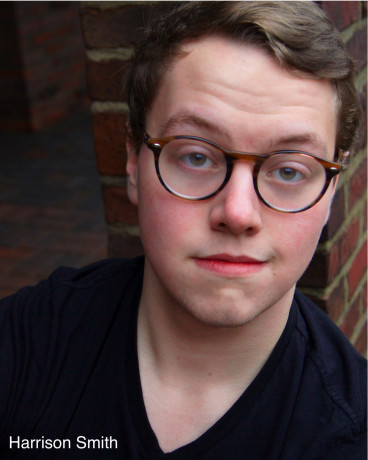 Joel: Introduce yourself to our readers and tell them where they may have seen you perform on the stage or in other local venues.

Hi. I’m Harrison Smith. Recently, readers may have seen me in Dogfight at The Keegan Theatre, A Funny Thing Happened on the Way to the Forum at MCSDT, and Unlimited: The Music and Lyrics of Stephen Schwartz here at CUA, or at La-Ti-Do.

Why did you want to be in The Most Happy Fella  at CUA? What did you sing at your audition?

The Most Happy Fella is a big, classic, beautiful show with music far ahead of it’s time. I am always looking to take on shows and roles that really stretch me. After hearing the show was a three hour musical-operetta hybrid with huge dance numbers and lots of different musical styles, I was interested in the challenge. I sang “Oh’ What a Beautiful Mornin” from Oklahoma! at my audition.

Who do you play in The Most Happy Fella and how do you relate to him? What do you admire about your character and what do you not admire?

I play Herman, who in a lot of ways I see as Frank Loesser’s warm up to writing Finch in How to Succeed. He possesses a lot of the same determination and charm as Finch does but with a much more carefree attitude. I can’t help but admire a character that is just so inherently good natured towards everybody and everything he does. This did prove to be frustrating in the room when trying to justify everyone pushing this great, sweet guy around for no reason.

How would you describe the score that Frank Loesser has written for this show?

Expansive, maybe? It’s almost 400 pages on paper and he wrote all of it. Every single thing people will hear when they see the show is Frank’s. The score, the book, the orchestrations, it’s all him. There are so many styles in the show: opera, classical musical theater, barbershop quartet, Western influence, and of course, Italian influence.

What is your favorite song that you are not performing and why?

I love “The Most Happy Fella.” It’s my favorite staging in the show, the ensemble is having the best time in the world, it sounds amazing, it’s a fun fun song, and it’s the first appearance of our amazing Tony.

What have been the challenges you have encountered while preparing for your role and how were those challenges overcome?

It was challenging in lots of ways. First, the role requires a fair amount of dancing which is a challenge, I haven’t really been faced with yet. Our choreography team was amazing with me in the process so that made that challenge less. The role is also very vocally demanding. Herman is one of the few roles in the show written to be sung in several different styles. It took a bit of time to figure out where all the songs would live stylistically and how I was going to sing through this massive score. Tom Pedersen, our music director and my voice teacher, helped me greatly. Listening to other Loesser shows to figure out how people take on his complex melodies and rangy vocals was also very helpful.

Pauline has such a love and knowledge for a lot of Frank Loesser’s work and the “musical gifts” he has left us in the score that it had made her choreography feel very natural. I love the choreography in “Big D” the most. The dance break in the song is wild with the style shifting between western, jazz, and ragtime. I just love the way it builds and involves so many different styles. It was also probably the hardest of the dances for me to learn.

What are your solos in the show and what do we learn about your character when you sing them?

Most of my solo songs are songs that more so than most of the characters in the show really sum up who Herman is. You learn about his favorite activity “Standing on the Corner,” where he is from and the sense of pride he has for his home “Big D,” and he sums up his general easy going philosophy on life in “I Like Everybody.” Loesser’s writing of these songs made my job as the actor incredibly simple as he gives you everything you need in the text. (I also have another solo at the end of the show but the title would spoil it.)

What does The Most Happy Fella have to say to today’s theatergoers and what themes from the show are still relevant today?

It’s a show about love. It has a lot to say for almost every aspect and consequence of love. Joey and Rosabella represent lust, Herman and Cleo represent fresh love, and Tony and Rosabella represent a nurturing developed love for each other as man and wife. It’s a show about overlooking the obvious faults in people and diving deeper past the shell to find the heart of a person. I think anyone could use that from their theater right now.

What have you learned about yourself – the actor and singer- during this whole process?

I’ve just learned to keep going. Putting up a show like this in 4 weeks is something that I love about the training here at Catholic. We are thrown into high octane environments with limited rehearsal time, difficult material, and on top of that a full course load. It really conditions you to learning shows quickly and making choices in the room quickly no matter if they remain in the final product of not.  It’s has been great preparation for the fast rehearsal process of professional theater. I also love getting to stretch myself vocally. I love that while typically I have done more contemporary shows in my life, CUA has allowed and trained me to be ready and able to jump into rehearsals for a massive 1956 three hour musical-opera less than a week after closing a 2012 Pasek and Paul show. It’s just something I find really unique about the training here is that we can take classes like classical choral singing as well as a pop and rock workshop. It allows us to do a Schwartz review in the same calendar year as this….and it’s pulled off beautifully.

What advice would you give another actor who is preparing to play your role in another production of The Most Happy Fella?

Rest and drink water like crazy. The role is so vocally demanding and you are moving so much that you will dry out really fast. Herman is a great guy, but he’s my no means a loser. I’ve seen a lot of productions where he’s often played as a loser but don’t feel restricted to that. He’s gotta get this girl to fall for him somehow.

What do you want audiences to take with them after seeing The Most Happy Fella and your performance?

I want people to leave with their heart so full of us!

The Most Happy Fella plays from October 23-25, 2015 at the Catholic University of America’s Hartke Theatre – 3801 Harewood Road, NE, in Washington, DC. For tickets, purchase them at the box office or online.

Chuck Leonard’s review of The Most Happy Fella on DCMetroTheaterArts.

Meet the Cast of ‘The Most Happy Fella’ at The Catholic University of America: Part 1: Mackenzie Newbury.

Meet the Cast of ‘The Most Happy Fella’ at The Catholic University of America: Part 2: Emma Nadine Onasch.

Meet the Cast of ‘The Most Happy Fella’ at The Catholic University of America: Part 3: Drew Stairs.

Meet the Cast of ‘The Most Happy Fella’ at Catholic University: Part 5: Bobby Cook Gallagher.

‘The Most Happy Fella’ Plays This Friday through Sunday 10/23-25 at Catholic University’s Hartke Theatre.