Technically speaking, Rizzo isn’t a great play. Bruce Graham’s new play about the life of the late Philadelphia mayor Frank Rizzo doesn’t dig deeply enough into what made its main character tick. The show’s framing device, using a single day in Rizzo’s final political campaign as a way for him to reminisce about his life, is sometimes used clumsily. The closing sequence conflates his final two campaigns confusingly (if you want to learn who he ran against in each of those campaigns, the play won’t give you a straight answer). And it has references that non-Philadelphians, even those who lived through Rizzo’s era, won’t get.

But boy oh boy, Rizzo is a great theatrical experience. Graham’s play captures Rizzo at his most contradictory and colorful, and Director Joe Canuso’s production speeds through life in two hours, rarely pausing to reflect or breathe. And it boasts terrific performances by Scott Greer (a natural for the role) and a strong supporting cast.

Rizzo doesn’t so much have a plot as it has a string of dozens of anecdotes from Rizzo’s life. So we see Frank Rizzo as a young beat cop, risking his life but shunning the spotlight when his bravery saves lives; a captain who fans the flames of racial hatred during the turbulent 1960s; a police commissioner who believes his men can do no wrong (and who disbands a Civilian Review Board so nobody could find anything wrong); a mayor who believes the key to political success with the white electorate was to “divide and conquer” (never recognizing that the people deserve to be governed, not divided or conquered); and a shadow mayor in his final years, wounded by controversy but still trying to control the public debate via a radio talk show and a return to politics.

Throughout we see a character called The Reporter (played with appealing openness by Damon Bonetti) tracking Rizzo over the years, sometimes hounding him, sometimes infuriating him, but always playing fair with him. (The Reporter is a fictional amalgam of several scribes, including Philadelphia Inquirer reporter turned ESPN commentator Sal Paolantonio, whose book Rizzo: The Last Big Man in Big City America is the play’s source.)

Rizzo shows that Rizzo was tough and diligent, working hard to establish an image as a “friend of the working man.” But it also shows that he treated graft, nepotism, betrayal, intimidation, and political dirty tricks as just part of doing business. They came naturally to him – and so did inflammatory language. We see Rizzo and his associates (including his loyal black bodyguard Jim Tuner) angrily denying that he was racist… but then we see him flaunting his bigotry by casually reeling off ethnic jokes and worse (“I’ll make Attila the Hun look like a faggot”).

Graham’s scenes are short and succinct, and often used for comic contrast: during his political comeback we see Rizzo claim that he’s mellowed… then a few seconds later we see him holding a press conference where he calls his opponent “a drunk and a mental case.” And the quick-hit style allows Graham to capture Rizzo’s often puzzling contradictions. One moment he’s rounding up a band of thugs to shut down the Inquirer for mocking him; the next he might be improving the city by establishing museums and a community college, or protecting a black neighbor facing racial harassment. (The neighbor says Rizzo “was a horrible mayor, but he’s a hell of a good neighbor.”)

If you lived in Greater Philadelphia in the seventies and eighties, Rizzo can almost seem like a ‘Greatest Hits’ show. Watching it, you may be wondering when your favorite (or least favorite) Rizzo line or story will show up. (Will we hear Frank say “The streets of Philadelphia are safe – it’s the people that make them unsafe”? Of course we will.) Opening night, with an audience filled with Rizzo’s friends, family, and opponents, was like old home night for 1970’s politicians. (I sat next to the real Shelly Yanoff, who seemed startled but delighted to see herself portrayed onstage.) When a lie detector machine was rolled onstage, it got a round of applause because the audience knew which outlandish story was coming next.

One thing the play does not do, unfortunately, is let us see into Rizzo’s head. The flashback structure seems to allow room for it, but aside from lamenting his strained relationship with his father, we never hear Rizzo reflect on what motivated him. (Then again, I get the feeling that Rizzo wasn’t one for much reflection.)

Graham chooses to dramatize Rizzo’s actions rather than judge them. Instead, he lets others take the spotlight and do the analysis. There’s longtime political advisor Marty Weinberg (a credible Paul L. Nolan), who is alternately supportive of and bewildered by his longtime friend; political antagonist Shelly Yanoff (a sassy Amanda Schoonover), who sees right through his belligerent tactics; and Rizzo’s wife Carmella (Schoonover again), who unfortunately gets relegated to a few blandly supportive lines.

Best of all is Akeem Davis, piling on the charm and the persuasion as Cecil B. Moore, the sharp-dressed, silver-tongued African-American lawyer who is one of the few people who can stand up to Rizzo. This play could have used a lot more of Moore – though Davis reappears throughout the play in various roles. Robert DaPonte and William Rahill round out the cast, and they’re excellent, juggling twelve characters between them.

Greer doesn’t resemble Rizzo much facially, but he captures Rizzo’s essence. Towering over his co-stars, his head hanging down, speaking sharply and deliberately, he barrels through every scene, but never hides Rizzo’s sensitivity. This is not a caricature, but a fully-rounded human who provokes both anger and sympathy. Canuso’s dynamic direction doesn’t allow much to get in the way of the words and the personalities; he points the actors at each other and lets the sparks fly – and usually they do. There are few visual flourishes – a dark, no-frills set and some video projections, courtesy of Scenographer John Hoey.

Rizzo skims the surface of a complicated man – but if you didn’t live through his mayoralty, or wish you hadn’t, it may finally explain his appeal to you. Like its subject, Rizzo is audacious and memorable.

In one of the play’s final scenes, The Reporter confronts Frank Rizzo about all that he’s done wrong – but then admits to him, “One on one, you’re hard not to like.” Likewise, what makes Rizzo, the play, work so well is that it gives us Rizzo, the man, one on one. 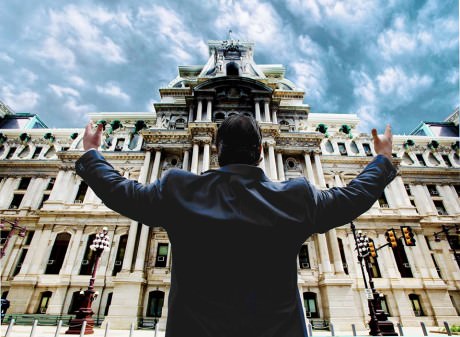