As I walked through the narrow passageway leading into Curio’s space, I entered into a spacious, deteriorating church to an ominous red lit stage, hearing that it was a two hour and ten minute one-woman show admittedly seemed daunting. However, it’s not nearly that unpromising.

Though Margaret Atwood’s novel The Handmaid’s Tale may be thirty years old, Joseph Stollenwork’s stage adaptation does not feel dated, but feels other worldly. It covers so many important issues still prevalent in today’s society recognized through the metaphor of the dystopia:  reproductive rights, rape, gender inequality, and patriarchy just to name a few. Through the anecdotes and narration of one woman recounting her experience in this baby-bearing obsessed hellish society, a modern audience can’t help but leave asking questions.

Director M. Craig Getting gives a voice and physicality to this powerful one-woman show. The single narrator embodies so many different locations and times that specificity in the continuous monologues help the audience imagine those characters. The director’s particularity and exactitude in choosing the movement helps the audience follow this jumpy narrative.

Many commendations have to be given to actor Isa St. Clair, who carried over two hours of stage time all on her own. Her lines are clear and articulate with no hint of tiring after a full two hours. St. Clair truly shined in the extreme emotional moments of reliving the visceral horrors of her life, specifically the sex scenes she experiences right in front of our eyes. Each movement, facial feature, and gesticulation was calculated intelligently.

However, that specificity, at times,  created some less than organic moments. Within the perfunctory narrative, St. Clair’s voice keeps a one note timbre making it difficult to discern any sort of deeper sentiment while she completes the detailed blocking. The different character voices within flashbacks also lacked clarity in personas and continued to lack richness while speaking as different people. 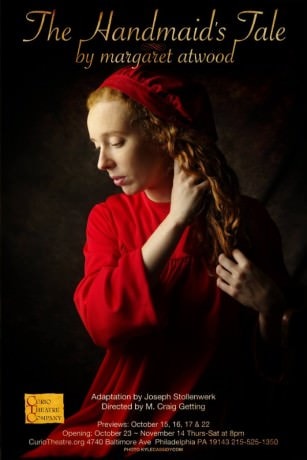 Everyone loves a good turntable, and this is no exception. The abstract cylindrical set by Set Designer Paul Kuhn, with nothing but a set of stairs, a few benches, and a ramp gives means for the multiple-location storytelling. Though the turntable motor is loud in an echoing space such as this church, its movement is so perfectly suited to the narrative that you easily drown it out.

The large amounts of scrim to this allows for effective abstract lighting by Lighting Designer Tim Martin. The backlighting and shadows are especially beautiful, bookending the acts and important moments of the show. However, the LED lights used are not flawless: they have the ability to change color, but the transitions are apparently not smooth. Specifically, the use of the color in the LED under the stairs felt brash and fragmented with the rest of the design.

The one costume by designer Aetna Gallagher suited the story just right. Everything was red as described in the text: a flowy dress reminiscent of a choir robe, booties, tights, and a head covering that felt the right amount of manufactured.

I left this The Handmaid’s Tale thinking and raw. And while the entire company worked together to tell this story, the tale does belong to the Handmaid.