The poetic dialogue of August Wilson’s Pulitzer Prize and Tony-winning classic Fences reached maximum intensity at Everyman Theatre Friday night, reigniting the sparks of passion as it did 32 years ago when it first premiered but now with deeper and richer sheen.

Craftily calibrated under Clinton Turner Davis’s direction (who worked backstage in the original Broadway production of Fences, featuring James Earl Jones), Wilson’s groundbreaking play is impressively revived with great attention to realistic detail from start to finish. Even before the lights ascend (designed by Nancy Schertler) and the characters emerge, eyes are immediately drawn to James Fouchard’s remarkably true-to-life set design, featuring the backyard of a modest two-story home, complete with a porch and a fence that is under construction.

One of 10 iconic plays that together form Wilson’s Pittsburgh Cycle (or, more alliteratively, his Century Cycle, as each one chronicles a decade in 20th-century African-American life), Fences has as its focus the lives of the Maxsons, a working-class African-American family dealing with a country in transition during the late 1950s.

Troy (Alan Bomar Jones) began life with great potential and great handicaps. His mother walked out on his abusive father. Troy ran away from home at 14 but became a star in the Negro Leagues. Then, racism halted his baseball career.

Now, a garbage collector, Troy still strives to live the American dream. He is married to the sensible and steadfast Rose (Joy Jones) and is the father of a teenage son who has great athletic potential.

On Friday nights, Troy downs a pint of gin with his best friend, Bono (Jason B. McIntosh). But, Wilson adds complexities to Troy’s existence, some oppressively looming the characters, some interwoven throughout the play. Troy’s brother, Gabriel (Bryant Bentley), who suffered a serious brain injury in the war, survives on benefit checks, some of which Troy has quietly used to buy his own home. Lyons (Gary-Kayi Fletcher), Troy’s eldest son from his first marriage is a “wanna’ be” musician with big dreams. He always comes begging for money from Troy on payday, and Troy begrudgingly lets him have it.

Troy and Rose’s son, Cory (Brayden Simpson), seems destined for success with aspirations of being a professional football player, but Troy (remembering his own bitter baseball experience) wants that to end. A third child (Indigo Bleu Turner/Gabrielle Nance) will be in the Maxsons’ lives by the play’s end.

Alan Bomar Jones dexterously commands the lead role, patriarch Troy, with great depth and dynamism. Even in his first scene when he is shooting the breeze with longtime friend Bono (an assuredly affable Jason B. McIntosh) after clocking out on payday, Jones has a latent fervor that is omnipotent. As the audience watches Troy gradually reveal himself to be complicated, and more unsettled, than the opening act may initially suggest, it becomes more evident that Fences is a narrative about someone who is haunted by choices he has made in the past, and struggling among the inequalities of mid-century America and the mistakes he continues to make as he ages. Central to his internal conflict, too, is the sense that he recognizes his faults, but is hindered by his pride from acknowledging them to those closest and dearest to him. Consistently throughout the production, Jones’ performance is absolutely riveting and mesmerizing.

Correspondingly, as his wife, Rose, Joy Jones skillfully counterbalances Troy’s boisterous and, at times, overbearing personality. The two mostly flirt and bicker with one another in the first act, and an easy rapport emanates between the two. Jones does a wonderful job of hinting at the lack of fulfillment that plagues her in her role as the devoted and dutiful wife. As the second act develops and she is comes into explicit conflict with Troy, nuance is mostly jettisoned in favor of icy condemnation and resentment. When Rose goes toe-to-toe with Troy, the confrontation is viscerally compelling and powerfully gripping.

Each of the supporting cast members are all immensely talented, delivering emotive performances in their own unique way. Particularly, noteworthy was Brayden Simpson as Cory, Troy and Rose’s teenaged son, who did a tremendous job of challenging Jones in the later scenes. Similarly, Gary-Kayi Fletcher was delightful as Lyons, Troy’s son from his prior marriage, by infusing his character’s would-be musician ambitions and flawed mooch tendencies with a humorous charm and likeability. Likewise, Bryant Bentley was magnificently convincing and extraordinary to watch as Troy’s mentally incapacitated, horn-holding brother who fancies himself as the Angel Gabriel. Finally, Jason B. McIntosh is warm and solid as Troy’s longtime friend – a cheerful listener who is not afraid to call it as he sees it.

Heartrendingly stirring one moment and hilariously silly the next, Everyman’s production of Fences is an incredibly rousing ride of emotion that will surely inspire compassion, forgiveness, acceptance and love in all.

Running Time: Approximately 2 hour and 30 minutes, including one 20-minute intermission. 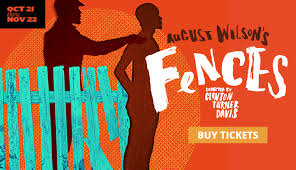