In Part 1 of a series of interviews with the cast of Songs for a New World at Metropolitan Youth Theatre (‘MYT’), meet Jordan Sledd.

Joel: Introduce yourself and tell our readers where they may have seen you before on local stages.

Jordan: Hi, I’m Jordan Sledd! With MYT, I previously appeared as Angel in Rent! People might also have seen me in shows at the Children’s Theater of Annapolis, Columbia Center for Theatrical Arts, Owl Gate Theater, 2nd Star Productions, or Laurel Mill Playhouse. Also, the week after SFANW, people can see me as Don Pedro in Archbishop Spalding’s production of Much Ado About Nothing (shameless plug).

Who do you play in Songs for a New World and how do you relate to your character? Does this character have any of your personality or traits?

I play Man 1 in MYT’s production of Songs for a New World! Man 1 and I share a similar drive to succeed and achieve our goals. We both undertake everything we do with a great level of enthusiasm and passion. Though, I have not had the type of troubled life that Man 1 has led, I can understand Man 1’s desire to achieve something great with his life and his desire to leave his mark on this world.

What has been the biggest challenge learning to play this role?

My biggest challenge has definitely been mastering the music. Jason Robert Brown doesn’t take it easy with how difficult his music is to sing. Man 1 has some of the highest notes ever written for a man so that’s been a super fun challenge for me! Also, I can’t say I’ve had most of the experiences my character has had, so creating a authentic, 3-dimensional character and finding a way to connect to him has been a good challenge for me as an actor.

Which character in Songs for a New World is most like you and how?

I think I’m a good mix of Man 1 and Woman 2. I have Man 1’s drive to succeed at whatever I set my mind to. But I have Woman 2’s general outlandishness and humor. Woman 2’s songs also sound like things I would actually say so I guess I’m more like Woman 2 with a dash of Man 1’s passion.

What have you learned about yourself-the actor and singer-during this experience?

What does Songs for a New World have to say to theatregoers of your generation and how is it still relevant?

Songs for a New World is a piece of theatrical art that I think applies to every generation. The main message in SFANW is that in life things don’t always go as planned and that you just have to find a way to adjust and survive through these moments because there is a “new world waiting just around the corner”. Since people will always have struggles of some kind, SFANW shows that life is all about how you deal with adversity and that there is always a light at the end of the tunnel, as cliché as that might sound, its true.

What song that you do not sing is your favorite and why?

“Surabaya Santa!” Whenever Mady (who plays Woman 2 in our production) sings that song I have a minor breakdown because its just SOOOO good! That song is hilarious and a show-stopper and I love it!

How is this production different and unique from other theatre experiences you have had?

I think there is something so special about being involved with a youth-run organization. It’s a completely different experience because you are working with your peers instead of someone who is much older than yourself. It allows for a whole new level of discussion on character and the show in general because everyone just feels a lot more comfortable addressing topics. There is more room for collaboration, which I think, leads to the high quality performances MYT puts on.

What do you want audiences to take with them after seeing your performance in Songs for a New World?

I hope people leave our show and take home our central message of truly living the best life you can live and go home and think about how they can deal with any sort of adversity. As much as my next sentence might sound like a motivational poster, I’m going to say it anyway! I hope people go home and strive to find their own personal “new world” where they are truly content and happy because isn’t that what all of us truly want?! 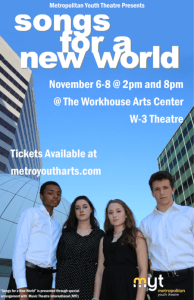