Hello my name is Lucrezia and I am a Rocky Horror-aholic. Like I’ve got “Don’t Dream It, Be It” tattooed on my left bicep. Growing up it helped so many of us, who felt outside and unworthy, to feel part of something truly cool and that it was also okay to have desires that ran counter to the mainstream. There are many parallels that can be drawn to the Burlesque community and so it’s kind of a stroke of genius that Boudoir Burlesque decided to do The Rocky Horror T*tty Show the night before Halloween.  I got a chance recently to chat with Blanche Boudoir, the brains (and beauty) behind it all. 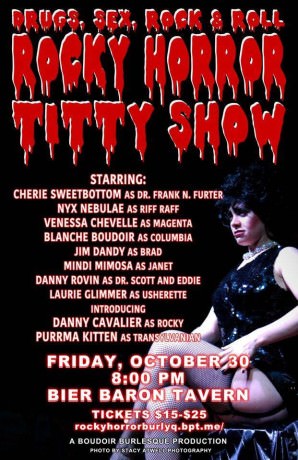 Lucrezia:  Since this our first interview, I’ll ask what I ask everyone at first – name, tagline if you’ve got one and when and why did you get into burlesque?

Blanche: Blanche Boudoir. I use the A Streetcar Named Desire quote “I’ve always depended on the kind  kindness of strangers” as a tagline. Why I got started its s mix of things – I broke my foot seriously and now have permanent nerve damage, before that I was a dancer (Pointe, Tap, etc.) after that injury though I just can’t dance like I used to so I found burlesque! Because of my foot you will rarely ever see me dance in heels and when I do they are the first things off ASAP!

When did you start?

Ha ha ha. That’s awesome! And when did you start producing?

Oh it’s been just a little over a year. The first burlesque show I produced was Get a Clue Burly Q in October of 2014.

As in Clue the board game/movie?

Board game yep. Each act had a room, weapon, etc. so people played along.  At the end if you kept track the last one not marked off was the killer, room, weapon.

That’s really clever! Your productions are all scripted, yeah?

More or less yes. Some are more “skeleton scripted” so it has a story arc. Others are fully scripted. I’m taking on more shows in 2016 so some may become more like vaudeville variety shows.

What came after Get a Clue?

After Clue was Nutcracker. Which was written mainly as an adult fairytale told by a narrator. The acts were all to Duke Ellington’s Nutcracker Suite.

And now you’re gearing up for Rocky Horror …

Yes! Which is my most scripted show to date. Quite a few of us have lines.

Who’s in your cast?

What do you want to accomplish with your work in burlesque?

I kind of want to go all pageanty here and say “world peace” or something. LOL. I want people to see something different than the typical, respect it as you would with any mainstream art and open minds.

With that theatre background it seems like you’re also bringing a more theatrical narrative to your shows.

Before burlesque I was in theatre and wrote plays for adults and kids and one of the biggest compliments I got was that my mind worked like Quentin Tarantino so I want to bring that to my art.

That’s pretty swell. Where were you writing? What theatres?

Small theaters in Maryland and Virginia. I’m not sure if I can name them because some closed but merged with colleges etc and they may not like to be associated with Burlesque. One closed because of a boycott over The Vagina Monologues!

Which is a great segue to talk about the burlesque closet. Your family doesn’t know you’re a burlesque performer.

How does she help?

She will put snaps on costumes for me or pick up fake eyelashes, things like that.

Would you ever let them come see you perform?

My family is hardcore Catholic and very sheltered so no. My family is from the upper peninsula of Michigan, very country. They survive on hunting up there. My extended family – the ones that never moved away – are essentially mountain people never met some races or alternate lifestyles.  My mom and dad grew up like that. I moved over 20 times as a kid to different countries and cities so my views are much different.

Oh my! What about work? Most everyone I know keeps it very separate from their “muggle” lives. I know a couple of folks who were fired recently from their muggle jobs for being burlesque performers.

I keep my work separate. However how I got my muggle job is through a fellow burlesque dancer.

What’s up next for you after Rocky Horror?

After Rocky is 50 Shades of Shakespeare then I’m bringing back and revamping The Nutcracker!

Yep. Which really isn’t that hard there is so many sexual references in Shakespeare!

And your performers are performing monologues or scenes from Shakespeare that lead into burlesque acts?

Exactly. The “hosts” Are the Bard and Christian Grey. How the thought came to me is I had two Shakespeare acts I was re-working and I wanted to change songs and the songs from the 50 Shades of Grey Soundtrack were perfect, then I realized it could be a show!