The L’Etage Cabaret’s lounge, with its mood lighting and leather seating and tea candles, is the perfect setting for the Idiopathic Ridiculopathy Consortium’s treatment of David Ives’s All in the Timing. It very possibly could have been “all in the setting,” as the lounge created such a warm feeling of intimacy to the entire affair. The warm ambience was soothing, lulling me to sink into the soft leather and settle in for a fantastic night. Of course, it could also be renamed “All in the Telling” as the Consortium brought these six stories together in a fantastic way in little over an hour and fifteen minutes. One of the best features of the evening had to be exactly the order the six plays were presented. Other productions have traditionally ended with Variations on the Death of Trotsky or have stuck The Philadelphia somewhere in the middle.

The Tina Brock and David Stranger directed production, well aware of its audience, began with The Philadelphia. The audience is already in a Philadelphia – and most of us Philadelphia people are often sadly aware we have spent our entire lives in a Philadelphia – and the regional recognition cannot help but bring the audience into the show. The use of the lounge space for this short play was clever, and really used the space to pull the audience further into the show. One of the lighter plays in the entire sextet, and it serves the night so much better to put this in the front, allowing the evening to build up beautifully.

The next offering was Sure Thing, a story of missed connections and second and two-hundredth chances. While there were a few missed cues from the production person handling the bell, it was easy to forgive given the fast-paced momentum of the story. There was an easy flow, and something recognizable in all the scenarios. The entire ten minutes demanded something of a skill in acting acrobatics, as not only did the dialogue reset with every ring of the bell, but so too did the tone and motivation for the two characters in the center. The actors, Tina Brock and Bob Schmidt did a great job of shifting between openness and shielded hostility to toxicity, all featuring an underlying loneliness with a slim (but possible) chance of connecting.

Then the evening really began to take off with Variations on the Death of Trostsky. Andrew Carroll infuses Trotsky with an arrogant charm that makes it clear why being the wife of an historical figure could be difficult, something that Jennifer MacMillan exudes with every encyclopedic reading. One of the great things about the layering of the plays, and the order that Brock and company decided to use, is that those echoes of the previous plays really sound out as the night moves along. The Trotskys are in a Philadelphia. The Trotskys are in a loop of possibilities like our couple in Sure Thing. What is fantastic about the Trotsky story is the way it weaves in tragedy with hope, a theme throughout all six of the plays in All in the Timing. Something else that happens often, that happened before this play and happened after as the night went on, was the clever use of the small space provided. Just like how Ives does not have a wasted word, the Consortium does not waste an inch of physical space, whether confined to the stage or moving out into the audience space. There is an almost elastic energy and chemistry between the actors, the way they move around each other both figuratively and literally, and while it has existed before this point, it is here that it truly began to show through for me.

The Universal Language. What to say about The Universal Language? There is that underlying loneliness that was present in The Sure Thing, but Kristen Norine brings such a force of determination and hope to her performance, that her joy in rattling off this new language is infectious. Norine and David Stranger really brought the language to life with an energy felt throughout the room. Quick and funny, poignant and meaningful, playful and insightful, the Universal Language is this evening at its best, both as far as Ives as a playwright is concerned and the Consortium’s production.

Words, Words, Words is where things get the most fun, fun, fun. The play is a treat for any lover of theater, literature, or the old adage about infinite monkeys and infinite typewriters seeking to make one Hamlet. If it were possible to headline my article with a quote from the play, I am sure it would have come from here. Too many deep things come out of one of the funniest plays of the evening. Tragedy and comedy meet head on here, and the actors do a fantastic job. Especially great here, and one of the standouts of the entire evening, was Carroll. Echoing back to his earlier Trotsky, Carroll’s Swift, while filled with defiance and discontent, also exudes that secret optimism for something better that drives all rebels. Garnering some of the biggest laughs of the evening, Words, Words, Words also confronts the very art form it is presenting in the most direct way.

Finally, appropriately ending the show was Philip Glass Buys a Loaf of Bread. Hilarious, with a satirical twist of poignancy, the Consortium does a great job parodying musical theater. The selection for the ending play though, more than anything else, highlights what the Consortium did so well in producing Ives’s All in the Timing.

In its arrangement of the six plays, the Consortium created its very own kind of symphonic movement. The way the plays came together was like a sweeping musical movement, one that, despite the heavy material in parts, left one with a feeling of joy and fun. All in the Timing, as told by the Consortium, has a bittersweet joy and optimism that beats through all of the many laughs. 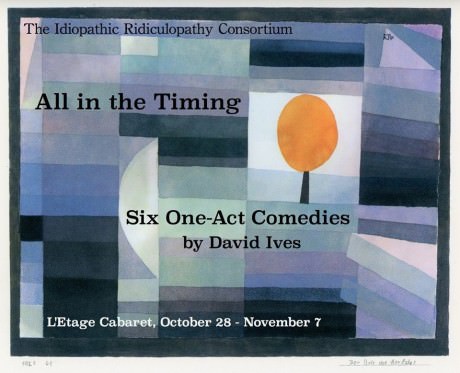 All in the Timing plays through November 7, 2015 by Idiopathic Ridiculopathy Consortium, performing at L’Etage Cabaret – 624 South 6th Street (above Beau Monde), in Philadelphia, PA. For tickets purchase them online.