I may have missed it, but to my knowledge no playwright in the current Women’s Voices Theater Festival set out to write a feminist-socialist play and explicitly said so. (Not that there’s anything wrong with that. Understandably those F and S words creep a lot of people out, Emma Watson and Bernie Sanders notwithstanding.) So in my book, that makes this solidly engaging university production of Caryl Churchill’s 1982 play Top Girls a theatrical event worthy of serious attention. 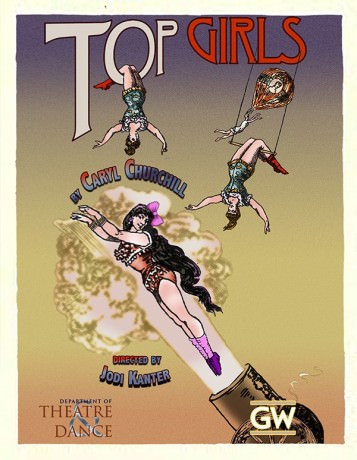 The endlessly inventive British playwright Churchill wrote Top Girls in 1982, a time when Margaret Thatcher was prime minister, Ronald Reagan was president, and women of considerable privilege had begun to climb the ranks of middle management aiming to smash the glass ceiling. None of the seven women whose considerable talents brought Churchill’s work to life last night onstage at The George Washington University had yet been born.

In 1987 Churchill said of Top Girls to an interviewer:

What I was intending to do was make it first look as though it was celebrating the achievements of women and then—by showing the main character, Marlene, being successful in a very competitive, destructive capitalist way—ask, what kind of achievement is that? The idea was that it would start out looking like a feminist play and turn into a socialist one, as well.

And that’s exactly what Churchill achieved in this fascinatingly complex time-traveling epic. In the first scene we meet Marlene, a self-acknowledged “pushy” exec, celebrating her promotion to managing director of the Top Girls employment agency by hosting a dinner party at an upscale London restaurant for five women. Those women, all figures from history, literature, and art, have accepted Marlene’s invitation to join her in the present (the 1980s). Downing bottle after bottle of fine wine, they chit-chat and tell overlapping stories about their lot in life as women—which sucks, not surprisingly, though the interconnecting tales they tell are astounding. “To our courage!” says Marlene as she toasts them. Then: “Why are we all so miserable?”

The last scene, set in a naturalistic kitchen in Suffolk, is a trenchant confrontation between Marlene and her sister Joyce, a working class woman raising a daughter, Angie, by holding down four jobs (“It adds up,” she says). Joyce challenges Marlene’s myopic grasping for success within an economic structure built on keeping people like her down beneath:

Marlene: She’s a tough lady, Maggie. I’d give her a job….
Joyce: You voted for her then?….
Marlene: First woman prime minister. Terrifico. Aces. Right on….
Joyce: What good’s first woman if it’s her? I suppose you would have liked Hitler if he was a woman. Ms Hitler. Got a lot done, Hitlerina….
Marlene: Bosses still walking on the workers’ faces? Still Dadda’s little parrot? Haven’t you learned to think for yourself? I believe in the individual. Look at me.
Joyce: I am looking at you.

So Marlene would not be a good advert for Lean In.

But more important, Top Girls dares to ask the question that Emily’s List will likely not: Will we be better off with a woman at the top if the capitalist system she’s highly stationed in stays the same? (Note to next Democratic debate moderators: Ask that.)

Churchill’s conceptual arc in Top Girls is profound and stealthy; from beginning to end, what she’s up to sneaks up on you. Thankfully in this GWU Department of Theatre and Dance production, Director Jodi Kanter makes each step of the way a riveting treat.

Angelina Hoidra as Marlene was the play’s commanding center of gravity. The five women she dines with are a motley assortment of characters all well played as well: Alexandria Taliaferro as Isabella Bird, an actual avid traveler: Kait Haire as Lady Nijo, an actual child courtesan in Japan; Madeleine Farrington as Pope Joan, a legendary pontiff who posed as a man; Melanie Lerch as Griselda, a literary figure in Chaucer; and Marceleine Sutter, whose uncouth lack of table manners as Dull Gret, a peasant in a painting by Breugel, much delighted the opening night audience. Their attentive server was played by Léocadia Tchouaffé. Everyone but Hoidra doubled or tripled. Notably, Sutter comically stole some later scenes in the role of young Angie, Lerch was very cute as Angie’s playmate Kit and Taliaferro reappeared in the powerful presence of Joyce.

To my ears the cast did British diction well (Susan Lynskey was the dialect coach), though they were not uniformly clearly audible, at times a function of being so far upstage on Scenic Designer Michael Stepowany’s curiously undistinguished symmetrical staircase-and-multiplatform set. Sound Designer Sabrina Hyman played authentically innocuous lounge piano under the restaurant scene and found amusing 80s tunes for the scene changes. And hats off (at the very least) to Costume Designer Sigríður Jóhannesdóttir, whose period garments for the five dinner guests, power suits for Marlene, and kids’ clothes for the girls were outstanding

Top Girls is quite a difficult play to stage, actually; on paper it’s a bit of a slog to read. Not only are there several time leaps (the end of Act Two takes place before the end of Act One); the characters are constantly talking on top of one another. In performance this simul-scripting creates a lifelike gendered language texture—I was reminded of the giggly girl talk one overhears among gaggles of teens and tweens who all seem to be chirping at once. Churchill’s characters do something similar, just more sobered up by being grown up, and the student cast last night handled it ably.

This rare run ends Sunday. Anyone who has never seen and listened to Top Girls on its feet should catch it now. It’s a certifiable modern classic, and it’s in a woman’s voice that speaks for all of us…except the one percent.