Let’s hear it for the Rockville Musical Theatre’s production of Footloose! This bold and bodacious, high-kicking, foot-stomping extravaganza features a dedicated cast of volunteer performers who exhibit the kind of polish that you would expect from a professional theatre company. With music by Tom Snow, lyrics by Dean Pitchford, and book by Pitchford and Walter Bobbie, this 1998 Tony-nominated Broadway musical was adapted from the 1984 film of the same name.

The story opens with teenager Ren McCormack (Derek Tatum) dancing up a storm in his favorite club in Chicago. However, his father has abandoned the family and created a financial hardship. So, the next day, Ren and his mother Ethel (Zoe Alexandratos) move to the fictitious rural town of Bomont—which appears to be the official definition of “the middle of nowhere”—to stay with Ren’s aunt and uncle.

Not surprisingly, Ren has trouble fitting in with his new surroundings. In particular, Ren loves to dance but the town of Bomont has an ordinance that prohibits dancing.  The law was implemented by the stern, conservative minister and powerful member of the Town Council, Reverend Shaw Moore (Paul Loebach), after a terrible auto accident involving four kids who were coming home from a dance. Moore preaches against the evils of rock and roll music and its “endless chant of pornography,” not realizing that his own daughter, Ariel (Sirena Dib) is having a meaningless physical relationship with Chuck Cranston (Cody Gilliam), a low-class jerk who is prone to violence.`

And, it’s not just the minister, but also the school principal, the coach, the rest of the Town Council, and most of the husbands, who treat the young people in the town with suspicion and callousness and their own wives with dismissiveness. Ethel and the minister’s wife Vi (Lee Michele Rosenthal) are resigned to it, but Ren decides to take more assertive action and Act One ends with his idea to hold a town dance—in defiance of the unfair and oppressive law.

Director and Choreographer Laurie Newton skillfully brings together a brilliant cast with professionalism and panache. Footloose is all about the dancing, and Newton practically creates a perpetual motion machine of lively dance numbers.

Of course, the lead role of Ren McCormack calls for extraordinary dancing ability, and the ultra-talented Derek Tatum fills the bill.  His moves are powerful and energetic and his acrobatic dancing is amazing!

As Ariel, Serena Dib is strong and defiant as she sings “Holding Out for a Hero,” but sweet and lovely as she and Tatum perform the transcendent love song, “Almost Paradise”.

As Reverend Moore, Paul Loebach sings with a rich, strong, baritone voice as he croons “Any Sunday” and “Heaven Help Me.” He also delivers a powerful sermon with the just the right amount of fire and brimstone. As his wife Vi, Lee Michele Rosenthal is a beautiful mezzo soprano who turns in a bravura performance. Loebach and Rosenthal are tender and loving as they take turns with the romantic ballad, “Can You Find It in Your Heart?” 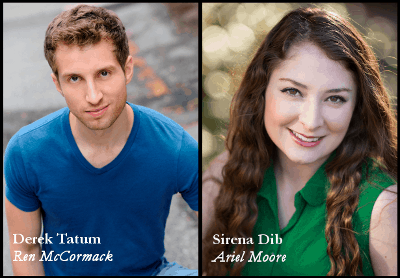 Ariel’s friend Rusty, delightfully portrayed by the irrepressible Robin Samek, falls in love with the shy and awkward Willard Hewitt, played for laughs by the multi-talented Tyler Adams. Samek shines as she belts out the popular rock hit, “Let’s Hear It For the Boy,” wonderfully assisted by Janice Sierra as Wendy Jo and Megan Evans as Urleen. Adams is simultaneously ridiculous and sublime in the novelty number, “Mama Says,” along with his excellent back-up group of Matthew Rosenthal as Jeter, Drew Brody as Bickle, and Jaylin Connor as Garvin.

Throughout the show, the harmonies were nothing short of spectacular. At one point, Ethel, Vi, and Ariel are in three different locations as together they sing, “Learning to Be Silent” in perfect harmony. The haunting and soulful number, “Somebody’s Eyes” is reprised several times by Rusty, Wendy Jo, and Urleen with rich and dreamy harmony.

Kudos to skillful and polished Musical Director Michelle Bruno who leads a thoroughly competent, yet appropriately unobtrusive, 7-piece pit orchestra in a challenging score. The group effortlessly transitions from rock and roll to country-western to romantic ballads and back again.

The versatile and creative Cody Gilliam not only sings and dances but does double duty as Set Designer and Costume Designer. The sets truly paint a picture of rural small town life with such pieces as an actual, full-size Volkswagen Beetle and an authentic gasoline pump. The Moore’s modest kitchen exhibits precise attention to detail and the church set is simple and beautiful. Gilliam’s costumes are colorful and varied, running the gamut from denim overalls to gorgeous gowns to choir robes to disco dresses.

As we could have predicted, the production number of “Footloose” brought the house down. We were dancing in our seats as the dancers on stage nearly took flight. There were turns and flips and lifts and kicks and pops and locks and dips–all performed with confidence and ease.

With its splendid mixture of beautiful ballads, hard-driving rock and roll, joyous dance numbers, and superb performances, Rockville Musical Theatre’s production of Footloose provides an exciting and fun theatre experience with a few sentimental moments along the way. So, kick off your Sunday shoes, and everybody cut Footloose!

Running Time: Approximately 2 hours and 20 minutes, with one 15-minute intermission.

Footloose plays through November 14, 2015 at Rockville Musical Theatre, performing at F. Scott Fitzgerald Theatre – 603 Edmonston Drive, in Rockville, MD. For tickets, call the Box Office at (240) 314-8690, or purchase them online.