If The Fox on the Fairway shows how the other half lives, well, I don’t know if I want to be a part of that other half. But I certainly do want to watch those country club hijinks from afar. Ken Ludwig turns heads in his uproarious comedy The Fox on the Fairway. Originally premiered in 2010, Ludwig’s play tells of the shenanigans at Quail Valley Country Club during their annual golf tournament versus rival country club Crouching Squirrel.

Director William Roudebush leads the cast to victory with constant physical and verbal humor. The never-ending monkey business is orchestrated wonderfully, from silly pre-putt rituals to the ridiculous high stakes fighting. The insane amount of entrances and exits reach Noises Off-like proportions, each one more successful than the last. The direct address in the prologues of each act even felt natural in a farcical environment.

The specific relationships within the show are what really make the piece.  The antagonistic rivalry between Dickie (that’s his name for a reason), played by Joe Guzmán, and mercurial Bingham (Peter Bisgaier) is the driving force of the play and a nonstop source of comedy, as well as their continuous and interchangeable romantic interests in Dickie’s ex-wife Pamela (Karen Peakes) and Bingham’s current wife Muriel (Gerre Garrett). The constant stream of venom pouring out of Bingham’s mouth towards dicky keeps you laughing. Peakes’ ability to flip on a dime from nonchalance to manic anxiety is hysterical and impressive.

The up-and-down relationship between the slow yet charming Louise (Naomi Weiss) and easily flustered Justin (Will Dennis) is entirely antics that complement the rest of the show: their constant stream of arguments and misunderstandings add so much silly drama to the tournament, and Dennis and Weiss pull out all the stops. The six person ensemble rises to the occasion, fulfilling the physicality and insanity needed to successfully pull of a farce.

Scenic design by Dirk Durossette gives a well-orchestrated country club interior and the illusion to the greens of a golf course, without being literal, specifically in the final scene on the green. Costume design by Jullian Keys fulfills every plaid and bad sweater dream you’ve ever had, as well as upping the class with the ritzy tuxes and gowns for the awards ceremony.

Kudos to the the tandem of Lighting Designer Jim Leitner  and Sound Designer John Stovicek for adding to the hilarity. There was the occasional ‘canned’ golf swing that didn’t sound quite realistic, but when combined with the loudspeaker echo effect – it added humor to an already humorous scene.

Grab a putter, a bad sweater, and some golf balls, and make your way down to Act II Playhouse for The Fox on the Fairway. Non-stop laughs will be par for the course! 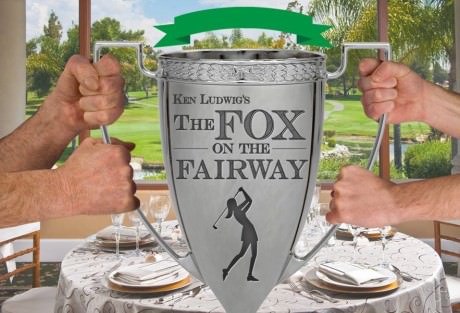