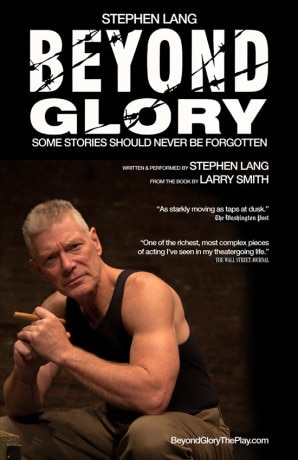 At Reston’s CenterStage, on the Tuesday evening before this year’s 2015 Veterans Day Holiday, there will be an evening of vivid stories about ordinary military service members who performed extraordinary deeds during their war-time service. The show is Beyond Glory; an emotionally rich evening providing powerful accounts of remarkable personal courage by Medal of Honor recipients.

Beyond Glory is performed by Tony Award nominated actor and playwright Stephen Lang in a one-man, multi-character presentation. Lang has also been the Co-Artistic Director of The Actors Studio, and has appeared in movies such as Avatar.

Beyond Glory is based upon Larry Smith’s book, Beyond Glory: Medal of Honor Heroes in Their Own Words. The Medal of Honor is awarded to military service members for valor in action. The Medal was created in 1861. Since then about 3,400 have received the award from the President in the name of Congress.

The presentation of Beyond Glory is for both military and civilians audiences. “I can think of no more fitting way to honor the veterans of Northern Virginia than to host this great talent telling these important stories, on the evening before Veterans Day,” said Paul Michnewicz, Arts and Events Director of the Reston Community Center.

Here is my interview with Stephen Lang:

David Siegel: Why did you decide to adapt the book Beyond Glory: Medal of Honor Heroes in Their Own Words into a live stage performance?

Stephen Lang: The decision to turn the book Beyond Glory into a stage performance virtually made itself. I read the book on a Sunday afternoon in May, 2003, and that evening I began working with the material. It is a marvelous piece of journalism in that the writer, Larry Smith, never intruded. I never sensed any filter between the men telling their stories and myself. And their voices came ringing through very clearly, and I mean that literally – I could actually hear their voices.

I think that is a testament to Larry Smith’s skill in interviewing, and making it comfortable for men to open up about things that they are usually reticent to speak of. Of course, being Medal of Honor recipients they have various degrees of polish in telling their stories, in some case stories they have shared many times, but somehow, in every case, Larry Smith elicited something deeper and very personal from these reluctant heroes. I guess the answer is that I am a sucker for a good story, and each of these stories is good and demands the telling and the hearing.

What can audiences expect at Beyond Glory at Reston’s CenterStage?

Audiences can expect 80 minutes of the best I’ve got to offer as an actor. They can expect to be spell bound by the stories of ordinary men doing extraordinary deeds. At least, that is my aim. Beyond Glory is an emotional tour through the conflicts of WWII, Korea, and Vietnam. It is by turns harrowing, sad, very funny, tragic, and just plain human. Audiences can expect to be moved, to laugh and cry.

Beyond Glory will be performed the evening before Veteran’s Day. Why is it important for audiences, whether veterans of military service or non-veterans, to come to know the service members you portray?

When I first began performing Beyond Glory in 2004 all 8 of the men I portray were alive. At this writing 2 are still with us, and I feel a certain obligation to keep the stories alive. The tag line for the show is, “Some stories must never be forgotten,” and that is truly the way I feel. These stories are examples of remarkable courage, fortitude, and humility, and as such they are both illuminating and inspirational. The qualities articulated in the show are by no means exclusive to the military, but speak to what binds us together as human beings. Of course, Veterans Day is a special day for the show.

It’s a day when we as a nation turn our thoughts to those who have served. Beyond Glory is part of that.

This production has toured many places including Broadway, military bases around the world and Congress. How have the audiences reacted?

Beyond Glory has been performed for audiences all over the world, military and civilian. Every audience needs to be clued into the fact that this is not a memorial service or awards ceremony, but a piece of living theatre. In other words, it is ok to laugh. The first character I portray, John Finn, is very salty and cantankerous, and when I get those first couple of laughs I know things are going to go well. Understand, I’m not looking to be a laugh riot, but I try to accomplish the give and take between audience and actor that makes theatre come really breathe. After a performance I always interact with the audience in the lobby, and many people want to say something about their own service, or that of a father or son. The show makes people want to talk.

Colonel Quaritch will be back for the three Avatar sequels. Having introduced Quaritch in the original I feel a real responsibility to evolve and grow the character in powerful and unexpected ways.

Yes, he is fictional, but he is very real to me. When playing non-fictional roles, as in Beyond Glory, there are perhaps more parameters to observe. There are the biographical facts of the men’s lives and the facts of the actions they undertook. The facts can be dramatically enhanced and selectively dealt with, but not altered. But it is really within the parameters that you plumb the depths of the character – this remains true whether the role be fiction or fact.

I’m looking forward to presenting Beyond Glory to the community. I look forward to meeting the audience after the performance.

LINKS:
Charles Isherwood’s review of Beyond Glory in the NY Times.

Some data on U.S. military veterans is here:

While the 2015 Veterans Day proclamation is not yet available here are links to 2014 White House materials and the proclamation.