In their inaugural production, Murder at the Mansion Dessert Theatre has brought murder, mystery, and petit-fours to Kentlands Mansion in the form of Polter-heist.

Polter-heist, written by Tony Schwartz and Marylou Ambrose and directed by Laura W. Andruski, brings an array of kooky characters together at the mansion. Phyllis and Jim Lodge have recently bought the property, which once belonged to Jim’s ancestors. However, they’ve been plagued by a string of bad luck, and the once affluent Hampton couple are facing financial ruin. To recoup their losses, they’ve turned the house into an inn, faked a haunting, and invited the Boogeyman Outreach Organization (B.O.O.) to hold their annual convention and ghost hunt in their home. Head of the organization is Madame Zelda Von Schpookum, a psychic medium who has in turn invited a noted paranormal researcher, Professor Lionel Spectre, to speak at the convention as a guest of honor. Two of the organizations newest members, Fox Smolder and Dana Skullery, seem to have more on their minds than a ghost hunt, though. Well, at least Skullery does. The professor is behaving strangely and she intends to find out why. But everyone’s plans are turned on their heads when it’s revealed that there truly is a ghost on the premises! And boy, does she ever have some secrets to tell. 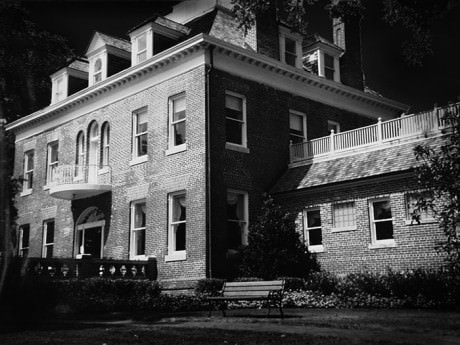 Toni Carmine plays Phyllis Lodge, a domineering society woman whose relocation from the Hamptons to Gaithersburg has left her all out of sorts. That her plans continue to fall apart is not helping her mood at all. Carmine is a strong presence; aggressive, well coiffed, and wielding a smile that could cut glass. Dean Fiala plays Phyllis’ husband, Jim. Submissive and bumbling, Fiala has a well-paced build-up to reveal his characters darker nature.

Mattie Cohan plays flower-child disc jockey, Janet, a woman quite recently released back into the world after a 15 year stint in an asylum. Cohan’s performance as Janet is delightfully unhinged. Madame Zelda Von Schpookum is played by Liz Weber, who, despite speaking to the dead and holding séances, may be the only sane person amongst the living. And while quite adept at handling the dead, Weber’s Madame Zelda is at a bit of a loss when it comes to dealing with the living; the angry, violent, possibly armed living.

David Savolaine plays the squirrelly and suspicious Professor Lionel Spectre (and perhaps a few other characters as well). Keeping him under observation are Thomas L. McGrath and Jackie Sweeney, who play agents Smolder and Skullery respectively. McGrath’s Smolder and Sweeney’s Skullery begin the show with their nerves already on high alert, and the steady boil of their tempers is hilarious.

The play falls back on a reliable mix of murder mystery and horror tropes, and parodies thereof. There’s something to be said for familiarity, though, and the comfort that comes with it. Polter-heist is self-aware, and even makes use of the locale for a few jokes – the ghost, for example, expresses a desire to relocate to a different house in Rockville. So while it may not win any awards for writing, Polter-heist is nevertheless undeniably fun. The show is easy to follow without being boring, the actors portray their characters to a tee, and the audience gets to discuss the murder suspects over drinks and dessert. There’s even a chance for some audience members to win prizes.

Kentlands Mansion is a beautiful building that sets the imagination alight as a setting for murder mysteries and ghost stories. Sadly, the action is limited to one room, while the rest of the downstairs is devoted to the cash bar, desserts, and dining areas, and the upstairs is closed to visitors. A consequence is that the seating is slightly cramped.

It’s clear that the crew had their own fun creating this production. Sound Designer Daniel Bentz cooked up some wonderfully cheesy sound effects for the show. Helping him was Chris Penick, who also acted as assistant director to Laura W. Andruski. Jessica Penick was the production assistant. There were a number of clever props and clues, some of them overt, while others you had to be lucky to catch. Jim’s fiddling with his lighter was one of these, as were some of the many props and books Janet kept on hand at her DJ station. I could say that I wished there were more clues like these throughout the show, but it’s quite likely that there were and I just missed them.

A Taste for Murder Productions and the staff of Kentlands Mansion provided a very enjoyable night, with a beautiful setting, tasty desserts, and a show that was campy in all the best ways. Polter-heist was a great show to celebrate the Halloween season with and I don’t think I’m alone in hoping that this partnership becomes a tradition.