It is intriguing to see a work in progress that has real merit. Sandra Kamman’s Duir-wyyd: The Dreamer’s Doorway, a play with music, straddles time and space to metaphysically interconnect the stories of a contemporary mother and daughter recently relocated to a DC rooming house and a band of Druids in ancient Ireland persecuted and uprooted by invading Romans. 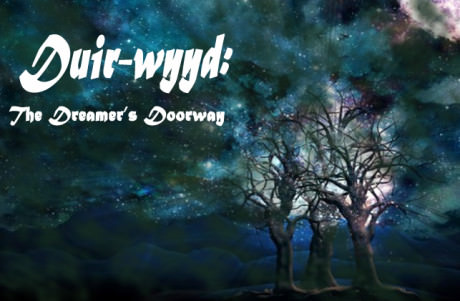 We first are introduced to a mother and daughter settling into a bedsitter, shared bathroom down the hall, and surrounded by unpacked boxes. Melissa (Carol Spring), the mother, sings a bit of the song “Queen of the Road,” suggesting their hand-to-mouth nomadic circumstances. Her financial wearies are coupled with artistic frustration as well. She has unpacked one box containing her unfinished manuscript which has become an unsolvable puzzle. In contrast, the daughter Claire (Madison Middleton) is enjoying success as an artist, placing among the top six finalists in a high school art competition. A bit of a dust up ensues when Melissa learns that Claire’s teacher (Craig Allen as Mr. Flanagan) has invited Claire (and her finalist classmates) to skip school the next day in order to attend a Renaissance Fair. The matter gets settled before turning in for the night. Fast asleep, another dreamlike world unfolds.

This is not Finian’s Rainbow, an Ireland of leprechauns and golden treasures, but ancient Éire, the land of Celts who practiced a sturdy mysticism guided by the Druids, the professional class representing the leaders of society. The story of another mother and her daughters from a besieged village intersects with two pairs of Druids, two (Carol Spring as Neeve and A.J. Calbert as Liam) journeying to an annual Council, and two (Craig Allen as Quinn and Lillian Oben as Eoin) fleeing from that spot which was savaged by invaders who slew the Council chief. The mother is slain and one daughter meets encounters the first Druid pair while she waits beside a mystical stream and willow tree for her sister to return from burying the mother. Around a campfire, a good deal of explication occurs about the particular brand of Christianity being imposed by Rome in contrast to other more humanistic (if not pantheistic) agnostic beliefs about Jesus. Jesus would have been comfortable with Druidic beliefs, certain of his followers not so much. This story turns upon a dream, a vision quest to determine their future direction in life. The Druids will embed themselves in the invader’s social institutions, not to assimilate, but to secretly preserve their heritage and traditions for the generations to come.

Back to the future, Melissa and Claire are startled awake by a knock at the door. The teacher has arrived and they’ve overslept. The stories are interwoven by Mr. Flanagan’s brogue, complete with a Gaelic saying, and a special gift for Claire’s mother.

The Celtic saga is the heart and soul of the play; the contemporary story which bookends the ancient one doesn’t feel wholly organic to the play as yet. It will be interesting to see how the show evolves. This production is blessed with a truly talented cast. The musical interludes — including traditional and modern compositions — are very appealing. Whether singing a capella or accompanied (Carol Spring on fiddle, Mary Abbott on harp, and Craig Allen on Doumbek), the voices are as refreshing as a forest  brook. Madelyn Farris and Vanessa Nolan also execute some interesting choreography as willow sprites who inhabit the dream to show the travelers their future pathway.

The costumes and set design by Margaret A. Howard (with beautiful sprite masks by Romula Hawthorne and Lynn Sharp Spears) create the perfect atmosphere. Sandra Kammann’s direction is smart and perfectly frames the action. Kammann is to be credited for conceiving a play that is intriguing, educational and heartening.