Fantastically directed by Susan Thornton and excellently musically directed by Pete Meyers, Other Voices Theatre’s Legally Blonde: The Musical is an extremely high-energy show with outstanding performances, plenty of pink hued girl power, and a heartwarming message within all the hilarity.

Based on the wildly successful 2001 movie and featuring a book by Heather Hach with music and lyrics Lawrence O’Keefe and Nell Benjamin, Legally Blonde: The Musical introduces the audience to Elle Woods, a blonde sorority girl with a large heart and great life in Malibu. But when her seemingly perfect boyfriend, Warner, dumps her for someone more “serious,”Elle trades in her stilettos for study guides and decides to follow Warner to Harvard Law School to win him back! With the help of her new friends Emmett and Paulette, and the constant mental support of her sorority sisters, Elle is determined to prove to everyone that she has both beauty and brains and can handle all the legal and love problems life throws at her!

As Elle Woods, Jennie Phelps is a fantastic leading lady. With an exceptional voice, wonderfully perky mannerisms, and a sweet disposition, Phelps is more than qualified to carry the show as the titular blonde. Jonas Dawson is earnest and absolutely adorable as Elle’s tutor, Emmett. His sincerity is charming and some of his awkward mannerisms were endearing. He has a phenomenally smooth tenor voice and also threw in a very impressive vocal riff at the end of his solo in “Chip on My Shoulder”.

Adam Blackstock is charmingly sleazy as Elle’s eventual ex-boyfriend, Warner and perfectly exhibits the obnoxiously smarmy attitude of a rich playboy coasting through life. Katherine Worley gives possibly the best performance in the production as foe-turned-friend and Warner’s new girlfriend, Vivienne. Worley perfectly suits her role and thoroughly inhabits the character’s cold, precise nature while eventually allowing her warmth and compassion to show through in some outstanding facial expressions and a powerhouse vocal belt in the “Legally Blonde Remix.”

Speaking of powerhouse performances. Taylor Knapp steals the show as beautician Paulette. With a delightfully over-the-top character and fantastically sharp comedic timing, Knapp commands the stage in every scene she is in. Likewise, Kasey Taylor as Margot, Chelsea Bondarenko as Serena and Georgiana Summers as Pilar form an unstoppable trio as Elle’s sorority sisters and later “Greek chorus,” displaying powerful vocal stylings and fantastic comedic moments. “Bend and Snap,” largely featuring the four aforementioned performers, was one of the highlights of the production.

Bonnie Samantha Fox, Drew Gasemy, Emily Holcomb, Lena Janes, Savannah Koontz, and Riley Smith are dazzling as the Delta Nu sorority sisters and brought much energy to all of the female ensemble numbers.

The show was very cleverly staged for the relatively smaller space. The large upper platform was utilized to great effect for many of the “Greek chorus” moments, similar to the staging in the original Broadway production, and scene changes were executed relatively quickly with smooth transitions.

The set, designed Timothy and Kyle Huth, was very impressive, especially the large rotating staircase used in the Delta Nu house. Lighting, designed by Steve Knapp, was well done and extremely colorful to match the upbeat tone of the show. Additionally, costumes, designed by Kirk Bowers and provided by Stage and Screen, were delightfully bright and showcased each character’s personality. Elle’s pink costumes were beautifully coordinated and there was a fantastic contrast between the colorful, bright costumes in the Delta Nu sorority house and the subdued, subtle costumes for the Harvard Law School setting. 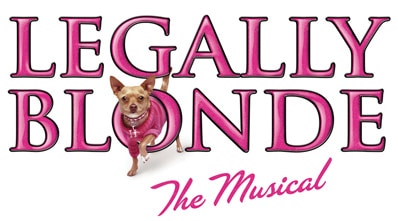 Running Time: Two hours and 15 minutes, with one-15 minute intermission.

Legally Blonde: The Musical plays through November 15, 2015 at Other Voices Theatre performing at the Performing Arts Factory – 244 South Jefferson Street, in Frederick, MD. For tickets, call the box office at (301) 662-3722, or purchase them online.