To quote Lantern Artistic Director and director of this production Kathryn MacMillan, “Time is the currency by which we negotiate all the relationships in our lives.” And Underneath the Lintel is currency extremely well-spent.

Underneath the Lintel entices the audience with the mystery surrounding a 113-year-late library book and a librarian’s quest to discover its keeper and secrets.

MacMillan, who directed the previously successful Photograph 51 earlier this fall, succeeds once again with the second production this season, though in a completely different way. Underneath the Lintel is equally academic and even more of a challenge articulating with only one voice. Luckily, the relationship and collaboration between singular actor Peter DeLaurier and MacMillan are cohesive and tell the story wonderfully.

DeLaurier reprises his Barrymore-winning role of the Librarian from Lantern’s 2003 production of Underneath the Lintel for obvious reasons. His masterful portrayal of this obsessive man shows an intimate relationship with the audience through his natural ability for direct address. It felt less like theater and more like I was truly experiencing this man’s journey performed effortlessly by DeLaurier, especially his duality of reading letters and addressing the audience is extremely clear, all with an extremely specific Dutch. It’s a tour de force!

Seth Thomas Schmitt-Hall’s scenic design appears simple and appropriate at first, but is riddled with purpose and metaphor. The location is clear by the set dressing of broken lights, exposed beams, and a hard wood paint treated floor to give the illusion of a rinky-dink auditorium with exquisite detail.

Jillian Keys’ costumes are intricately stressed to perfect indicate the wear that this man has faced on his quest, with dated cloud pants and jacket you would find in a thrift store.

Lighting by Peter Escalada-Mastick was a simple, warm-wash to include the audience in the presentation when needed, but also focused and darkened during the more personal moments of the narrator’s story.

The Librarian in Lantern Theater Company’s Underneath the Lintel ambiguously describes his presentation as “interesting,” and lucky for us, it is extremely interesting…and entertaining! 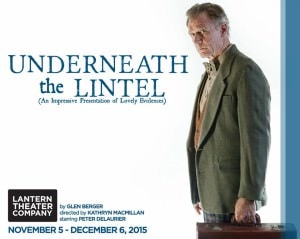 Underneath the Lintel plays through December 6, 2015 at the Lantern Theater Company – performing at St. Stephen’s Theater – 10th & Ludlow Streets, in Philadelphia, PA. For tickets, call the box office at (215) 829-0395, or purchase them online.