Marisol keenly follows the traditions of Magical Realism and Theater of the Absurd. It is clear that Eugene Ionesco and Samuel Becket, who are known for this genre, are major influences of the playwright Jose Rivera. Director Eric Ruffin plays upon that genre to take us on a dark and violent journey into a world just on the cusp of the new millennium where our worst nightmares are imagined. 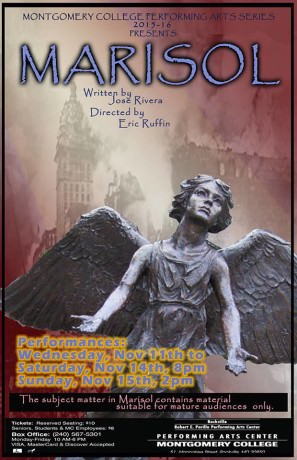 The story takes place in a dangerous Bronx neighborhood in New York City. Marisol Perez, the central character, is a young Puerto Rican woman and copy editor for a Manhattan publisher. As the play opens, Marisol narrowly escapes a vicious attack by a madman welding a golf club while traveling home on the subway. Marisol is visited that night by her guardian angel who gives her the news that she can no longer protect her from harm. Her guardian angel tells her that she has joined the revolution against an old and senile God who is dying and “taking the rest of the universe with him.”  As the war in heaven spills over into New York City, Marisol begins a dark journey into this new war zone she used to call home. As the action builds, Marisol and the masses of homeless people join the angels in a war to save the universe.

The battle between God, the angels and his homeless and displaced disciples, generates many questions throughout the play about religion. This is especially true for the many subtle visual references to the Catholic Church such as the small shrine and candle alter in Marisol’s apartment in Act I.  It is definitely a piece of theater that leaves you thinking as you exit the auditorium and long after the show is over.

All the technical aspects of the play were completely on point. Major kudos go out to Scenic Designer Elizabeth McFadden for creating an incredible set that brings a sense of realism to the events that follow in the play. No detail is spared from the iron grates, chain link fence, fire hydrant laden with rosary beads, trash can, multiple locks on Marisol’s apartment door and telephone pole that the angel descends upon in the beginning of Act I, just to name a few. It was truly a visual feast for the eyes.

The same goes for Lighting Designer Lynn Joslin, Projections Designer Riki K. and Sound Designer Neil McFadden for creating the dark and brooding mood of the play, and at the same time, a sense of whimsy.

Costume Designer Peter Zakutansky did a brilliant job transforming the actors into their characters. Two standouts were the angel dressed in a black leather from head to toe with the exception of her coral wings foreshadowing impending doom and Man with Scar Tissue’s costume made up of mummy style bandages and bleeding flesh.

Director Eric Ruffin did a wonderful job moving the actors through this world where humanity has become a thing of the past  He set the mood from the moment you walk into the theater. When the house opens you walk into this low income Bronx neighborhood where the homeless wander aimlessly through the house, some asking for help while others just walk in silence. In the background there is a young man on stage playing several native drums keeping beat to the heartbeat of the lives we see in the streets. These drum beats continue throughout the play for scene changes. The drum beats seem to be the tie that binds the play together. The Ensemble/Dancers/Musicians were played by Yesudian Cruz, Jonathan Alfaro, Miranda Tharp, and Ramon Jones. Their realistic portrayals gave the audience a sense of uneasiness when they walked past your seat.

Marisol, played by Jazmin Bacallao, gives a strong performance in this title role.  It is obvious that she had a good sense of self and excellent character development.

Two standout performances go to Cristian Linares as Lenny and Britt Duff as June who give believable strong performances as brother and sister and friend of Marisol.  They leave their humanity behind until they are brought back by Marisol by her faith in God and her strong belief in the good of man.

Man with Scar Tissue played by Christopher Blackwell gave an outstanding performance as a sexual deviant in search of his lost skin. He played the part with authenticity and much needed humor.

Angel, played by Albertha Joseph, Man with Golf Clubs, played by Robert Ruthenberg-Marshall, Woman with Fur, played by Sarah Vandegrift and Man with Ice Cream, played by Peter Winnard all gave fine performances as well in their supporting roles.

The only thing that would make this show have more impact would be a more intimate setting. The auditorium is very large, and even though the director tried to make it more intimate by moving the homeless and displaced into the audiences’ space, this production would have benefited greatly by being in a black box type setting.

All in all, Marisol is a wonderful example of Magical Realism done right. It’s definitely worth seeing, if you are a fan of the genre or if you want to experience this type of theater for the first time. Montgomery College does a fine job filling the bill.

Running Time: One hour and 40 minutes, with one intermission.

Marisol plays through Sunday, November 15, 2015 at Montgomery College performing in the Robert E. Parilla Performing Arts Center – 51 Mannakee Street, in Rockville, MD. For tickets, call the Box Office at (240) 567-5301, or purchase them online.