I know we all remember our first trip to Neverland, our first time meeting Peter Pan. And still without fail, every trip back is slightly different from the last. In Michael Lluberes’ adaption of Peter and Wendy by J.M. Barrie, Peter Pan: The Boy Who Hated Mothers took a small cast of seven adventures with 15 faces and urged us to explore once more.

It was in those double and triple castings that I found the most to think about. The lost boys were also the pirates who hunted them. John Darling was the bird who saved Peter’s life after a hook slice stranded Peter on the rock to drown with the rising tide. And, unlike the many other Pan variations, it was Mrs. Darling grieving over the loss of baby Michael who brought a new kind of hatred as Captain Hook. 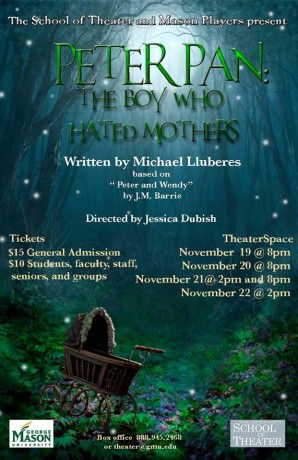 The only actor who was not mutli-cast, as one might have guessed, was the title character played by Ben Peter. Perhaps due to his surname, this GMU sophomore successfully tapped into Peter Pan’s willful ignorance and kept those famous confusions over kisses and thimbles genuine and endearing. (Let me tell you, there were many thimbles for Peter Pan over the course of the show.) This Peter hinted at the darker repercussions of Lost Boys who never grow old while still keeping Tinkerbell and fairy dust alive.

For me, the most interesting character pair was Peter Pan’s enemy played by Catherine Gilbert. I found the strength of Captain Hook to come from the double meanings of his/her words. He hated all children because of what Peter Pan did to his hand, while she (Mrs. Darling) hated both herself for Michael’s death and Michael for leaving. Each feeling feeding back into the other on an endless loop, which dragged both down but had only one get back up again. It was in Gilbert’s speeches that she really connected with her characters; a villain’s vengeance and a mother’s grief.

Connected also in that familial loss were Wendy Darling (Jane), played by Deanna McCollum and John Darling, played by Adam Lemos. Both did a good job capturing the expressions of two disbelieving, enchanted, and adventurous siblings. John equipped with his snobbish top hat and Wendy with her tender hopes wrapped up into what Peter could not be.

For the rest of the small but mighty cast, MacKenzie Cahill as Nibs/Bill Jukes/Tiger Lilly nailed a spunky accent that would have made Daisy from Downton Abbey proud and had an innate ability to turn even the most straightforward line into a comedic gem.

Keenan Gibson whose Tootles was as earnest as his Smee was unaware, had physical reactions that kept the show rolling. Max Snyder rounded up the bumbling trio with a dash of know-it-all-ness as Slightly/Starkey. Together these three players took on the challenge to dirty up the lost boys and dress down the pirates. Challenges that were wonderfully aided by the directive choices made by the production’s director, Jessica Dubish. With commonplace items—a chest and a bed sheet—she showed us each corner of Neverland could be reached through objects we come in to contact with every day. (I also found it wonderfully appropriate that the cast played with the concept of object permanence their entrances, exits, and character shifts; actually disappearing behind a sheet, just like a child believes in playing peekaboo.) It was the right mixture of suspension of disbelief and open storytelling.

The overall transportation to Neverland was aided by some particularly clever projections, designed by Mary Grant; the lighting cues, directed by Maggie Riegel; and the sound design by Reid May. Using, again, just a bed sheet the crocodile was thrust into our midst with its dreadful tick-tock. On the set backdrop (designed by Alessandro Gaiarin) sprang up the wild branches of a magical forest, through which the small blue light and chimes of Tinkerbell danced. And on the nursery wallpaper a frightened boy’s lost shadow taunted and ran away.

If there were one comment I could leave this cast and crew to think over, it would be on the use of silence. Use each pause not only for the character to react in/to but for the audience to apply to their own lives. While it was clear from the quick pace of the lines that the actors knew their parts very well, the reflection on those lines and several pivotal moments was lost. Much of the magic in the story of Peter Pan is in the reflection that the audience enters into: about Peter, about growing up, and about themselves. I know personally every time I wade into the story of Peter Pan, I learn something new about what it means for all of us to grow up. There’s a power in that reflection—and in this show—that should not be missed.

Running Time: One hour and 40 minutes, with a 15-minute intermission.

Peter Pan: The Boy Who Hated Mothers performed by the Mason Players plays through Sunday, November 22, 2015 at the George Mason University Center of the Arts TheaterSpace – 4373 Mason Pond Drive, in Fairfax, VA. For tickets, call the box office at(703) 993-2787, or purchase them online.